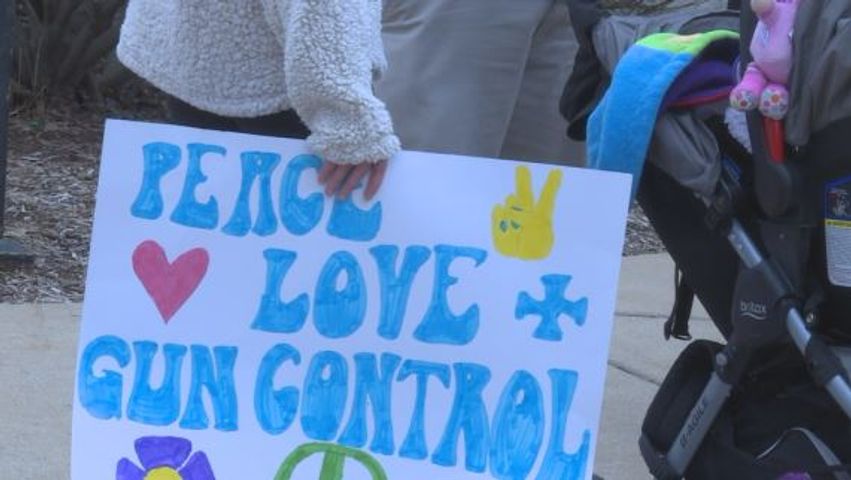 "In the first fifty-two days of 2018, 2103 have died have died from gun violence and 3592 have been injured," said Hannah Maurer, a senior at Parkway Central High School at today's rally. "I do not feel safe in this country knowing my school could be the next news story and classmates of mines could be the next victims of such a massacre."

Students from Clayton and Parkway Central High School in St. Louis held in a rally demanding action regarding gun violence. Common sense gun laws were on of the main subjects of discussion.

The rally was organized by a student group from Parkway Central High School called Students Demand Action whose main aim is to address gun violence in Missouri and nationwide.

"In 2013, nearly 300 school shootings occurred in America. How many before our elected officials passes common sense laws to prevent gun violence? I urge Congress to start listening to the real constituents' fears rather than simply add to them," Maurer said."

Students recalled past mass shootings like Columbine, Sandy Hook, Orlando, Las Vegas and more. State rep. Stacey Newman stood in solidarity with the students this afternoon, sympathizing with their cause. Newman says enough is finally enough.

"It's too extreme. We're losing too many people. We can't do this anymore," Rep. Newman said.

Newman had been in correspondence with Students Demand Action for a few months before the rally began to be planned. Newman says students need to be heard on this issue.

"It's their voices that need to be amplified. That's my role, amplifying their voices," Newman said.

It was Newman's long career advocating for gun control legislation that made the students' cause appeal to her.

Newman has her own ideas on what needs to happen to address gun violence in America.

Those attending the event say increased gun control is increasingly becoming need. They say as students the no longer feel safe at home, at theatres, in cars, or at school.

"I think people understand that we're not coming for your guns," said Shimon Likhman, a senior at Parkway Central High School who attended the event. "We just want to make sure that people who follow the law, people who aren't going to shoot up a school, those are the people that will be allowed to purchase guns. We're just working on making sure we have less of a gun culture that promotes violence and allows us to be desensitized to school shootings."

With the support of several members of the Parkland Central High School community at the event, Maurer said she hopes more people will listen to the young people today, especially as many approach voting age.

"I hope to see just essentially our voices being heard," Maurer said. "It takes a lot to get a single bill passed as Stacey knows but it doesn't take much at all to make sure our voices are heard. That is the first step of any sort of change."

Rep. Newman says that instead of the Missouri Legislature advancing bills that loosen gun laws, lawmakers should instead be addressing the concerns of young people in this country. Newman recently filed Missouri House Bill 2554, the "Save Our Kids Act", which includes what she calls seven common sense ideas to address gun violence.

Speakers at the event urged attendees to vote for lawmakers who support gun control during this year's midterm elections.