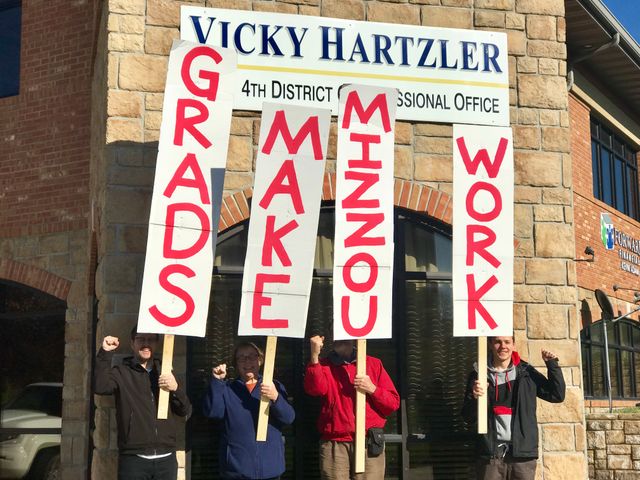 MISSOURI - Missouri's Supreme Court on Tuesday rejected the UM System's last appeal in a case that would grant the university's graduate student workers employee status and allow them to unionize.

The decision lets stand a July decision from the Missouri Western District Court of Appeals that graduate students should be considered employees. It was the third consecutive ruling against the university in lower state courts. The university asked the Supreme Court to reconsider the case in September.

The UM System's request for transfer argued that clarification was necessary on the definition of "employees" under the Missouri Constitution, and whether it includes workers whose primary purpose is "academic development."

The state's highest court did not issue an opinion along with its one-sentence order denying the university's appeal.

Graduate leaders view the decision as a victory and validation for their efforts, and made their frustration at the university’s continued appeals clear.

“The university was using the court system to try and diminish our enthusiasm and delay the inevitable for as long as possible,” said Michael Vierling, co-chair for the Coalition of Graduate Workers. “After three consecutive losses, I think (the university) may finally have enough legal clarification that we are employees.”

Reaction from the university was brief.

"It’s our understanding that the case will be remanded to the trial court for further proceedings consistent with the opinion of the Court of Appeals," said UM spokesman Christian Basi. The reference was to a section of the appellate court ruling that requires further court review of the election that made the Coalition of Graduate Workers the graduate students' collective bargaining representative.

Although the issue of unionization for the workers is all but settled, the union election’s results are still in question. The appellate court ruling sent the case back down to Harris at the circuit court for further arguments. Vierling said graduate leaders were prepared to meet and discuss the next steps for that process.

“The next step will be to finally be able to sit down and talk with the administration to discuss the need for a new election and what that election will look like.”

Part of the next steps for the workers will be determining who will be included in the bargaining unit, and taking steps to recognize union eligibility for all graduate students – teachers, researchers and librarians alike.

The battle for unionization between graduate student workers and the UM System has been ongoing for three years.

In the fall of 2015, the university revoked research and teaching assistants' health care subsidies. The university refused to recognize the results of a union election in April 2016.

Throughout the legal battle, the UM System has argued that graduate workers are not employees and thus not granted collective bargaining rights under the Missouri Constitution.

The original July 2018 ruling, in the Boone County Circuit Court from Judge Jeff Harris, said otherwise. His opinion stated that "the University, through its practices and policies, treats (graduate students) like employees."

The university appealed that decision to the Court of Appeals, resulting in a unanimous ruling in July that graduate workers were considered employees and able to collectively bargain. It did, however, reverse part of the original ruling that granted the Coalition of Graduate Workers exclusive bargaining rights.

Vierling and other graduate leaders said they were looking forward to finally ending the years-long dispute and coming to an agreement with the university.

“(We want) to better protect graduate students so they feel like they can do that work, we think a legal contract with the university would concrete that and put a lot of worries to rest."