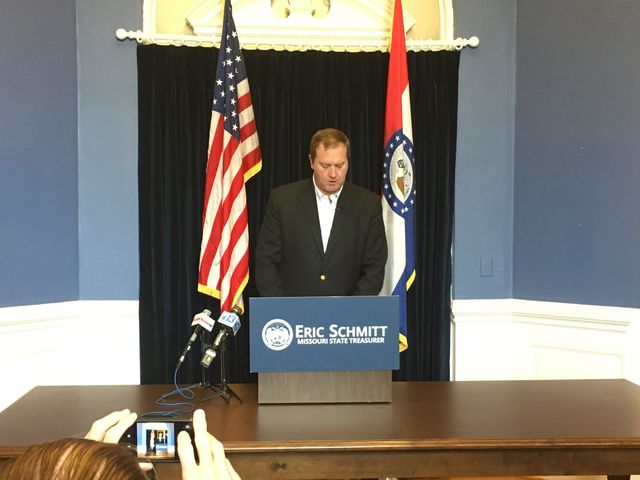 At Schmitt's press conference Wednesday, he highlighted his ideas for reform that he says could bring tax relief to Missouri's working families and small businesses.

Local business owners in Jefferson City agree they could use some financial help, especially if they've just opened up shop.

"New businesses, you do have to borrow the money to get your goods, you've got rents to pay. You have a lot of overhead," said Sam Buschman, owner of Samuel's Tuxedos and Gifts.

Buschman, who's been in downtown Jefferson City since 1991, says he's had it lucky. He's been profitable since he opened and makes a comfortable income from his business. But Buschman has seen plenty of stores come and go in the downtown scene, and knows how important a few thousand dollars from a tax cut can be for a local business owner.

"Anything you can save for them is money in their pocket," Buschman said.

Schmitt might agree with Buschman, citing estimates from the Tax Foundation saying this tax reform would create 18,000 new jobs in Missouri over a period of 10 years. The same estimates place a $2400 increase in income for the average Missouri middle class family.

Kenneth Amend, owner of Divinity Religious Gift Shop, is facing his own set of financial troubles, but he doesn't necessarily agree they would be solved through tax cuts.

"I'm the only store like this in central Missouri," Amend said. "It's always been a difficult market to be in."

Divinity Religious Gift Shop, which has been open almost 19 years, is struggling to compete on the online marketplace, losing customers to websites like Amazon.

"Here in my shop here, we stock over 13,000 different items. And we're low now because we're reducing our inventory. It's very difficult to do this here," Amend said.

"If I had that income, it would be substantial," Amend said.

Amend said he would rather see officials put energy toward holding large online companies accountable for their customer service.

"Being ethical is so crucial in dealing with this stuff, and hold these companies accountable. There's people that order stuff and by the time they get it, it can be misleading," Amend said.

Despite Schmitt's confidence in the plan, not everyone agrees this tax reform is focused in the right place.

The Tax Policy Center, a nonpartisan think tank based out of D.C., released a report in September breaking down President Trump's initial tax outline.

In it's analysis, the Center found that while low- and middle-income households would get "modest" tax cuts, closer to 1.2 percent of their after-tax income, most of the benefits would go toward the highest one percent of earners with an 8 percent boost in after-tax income.

Schmitt's trip to the nation's capital comes right on the heels of the Senate Finance and House Ways and Means Committees, which are working towards creating a new tax code bill.

The last time the country has seen a major update in the federal tax code was under President Ronald Reagan in 1986. Schmitt said this has been too long of a wait.

"A lot has changed since [1986], but inexplicably, America's tax code has not," Schmitt said.

Schmitt called on Congress to "put working families first" in September, and now plans to take that same message to D.C., where lawmakers are working to get tax reform passed by the end of the year.