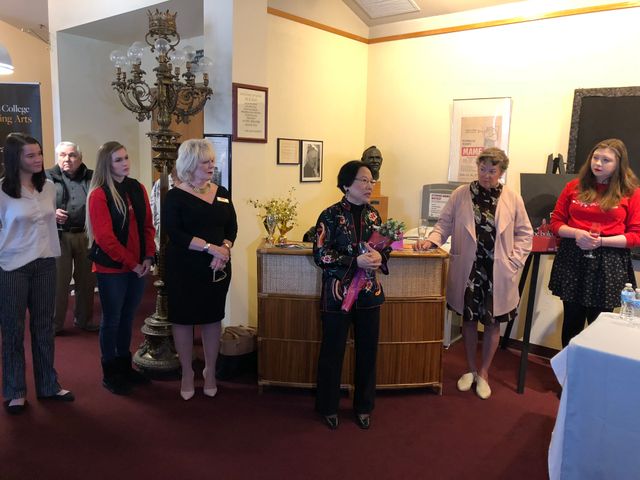 COLUMBIA - The Stephens College School of Creative and Performing Arts toasted to a woman who is using her platform to help raise awareness on human trafficking in central Missouri.

The Woman of Courage award is dedicated to a local figure who "acts locally and thinks globally" in relation to social issues plaguing women in the community. The award started 3 years ago at Stephens College.

Nanette Ward is the recipient of this year's award. Ward is a founding member of the Central Missouri Stop Human Trafficking Coalition.

Ward took the time to show her appreciation for the people in her life who have supported her and the coalition's work.

"It's an honor and privilege that I had to receive this and to be recognized," Ward said. "I have this opportunity to appreciate and recognize all the people who have surrounded me, come alongside me, loved me, supported me in the tough times and in the wonderful times."

According to their website, the coalition envisions communities free of modern-day slavery.

The coalition began in 2008 to help sustain anti-trafficking efforts put forth by the University of Missouri.  The organization works to not only stop human trafficking but works to support survivors once they are out of their situations.

In 2017, there were 140 human trafficking cases reported in Missouri. These cases include sex, labor and unspecified types of trafficking. Out of those 140 cases, 41 of them were minors.

One survivor said without Ward's passion and dedication, she would not have been able to get back on her feet and live a stable life.

"I was 19 when I met her, I was homeless and I had been out of my trafficking situation for a couple of years, but wasn't really receiving the community service that I need with resources and she found me," Tatianna Cruz said.

Cruz went on to say it's important the coalition exists because law enforcement can only do so much to help survivors get back into society after they are pulled from their situation.

"The coalition helps them realize that they are humans and they are people and that someone cares even if their family, or the system has let them down. The coalition and Nanette offer the empathy and support that they need," Cruz said.

Every year, the Stephens' Performing Arts Department puts on a show connected in some way to the recipient of the award. This year's show called "When We Were Young and Unafraid" details the hardships of battered women and their fight to gain rights in the 1920s.