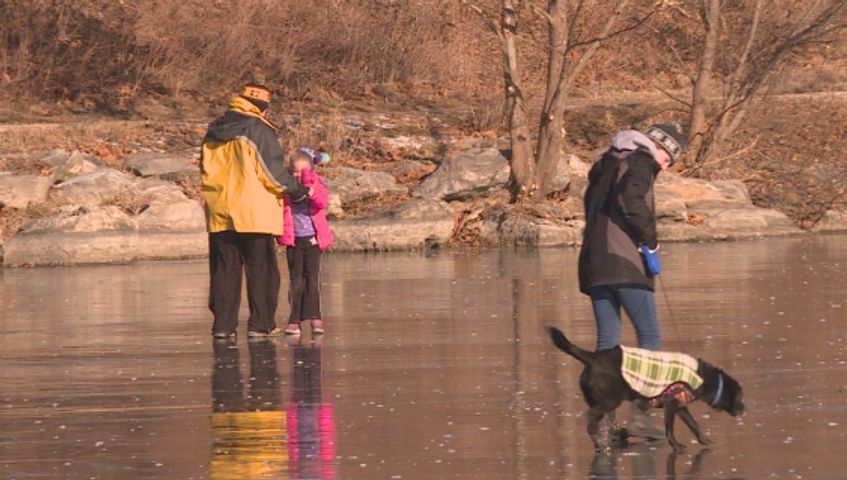 COLUMBIA - The ice just met the mark for ice skating, reaching the minimum depth of four inches on Columbia lakes.

"Our staff will start to monitor the thickness of the ice as we start to get colder and so we have staff that go out on a daily basis and they actually will drill down starting at the shore line out to the middle of the lake, and once we get a consistency of 4 inches in depth we will allow those two lakes to be open for recreational activities, Huffington said."

Huffington said visitors should make note of those tips before stepping onto the ice.

"Watch for slush that usually means there may be some ice areas that have melted a little bit, also if there is snow cover always be mindful of that because there could be some cracking or there could be some uneven ice underneath that snow that its hard to see visually," he said.

He also said you should not stand in one area.

"Always make sure if you're congregating in an area you're not there for too long obviously a bigger impact can be made on that ice if it's a large group of people. And some of our individuals go out in our groups to play hockey or skate and they know to kind of move around in those areas," said Huffington.

Another point is watching for children.

"Children be supervised if they're out on the ice, whether it's skating or fishing, and then also always make sure that you skate or fish with someone else," Huffington said.

People should be careful when checking the ice's depth.

"Individuals are gonna be out there, are gonna use their best judgement, they know whether or not its loose or it sounds like its making a lot of noise, there's some different currents underneath there," Huffington said.

Columbia resident Bobbi Nichols said she hasn't skated in years and was excited to try it out soon.

"It would probably be on the weekend because I work during the week. And definitely bring friends. It's a fun group activity," she said.

"We only allow ice skating and ice fishing during the daylight hours so, once it gets dark, the park is still open with our hours, but we don't allow anyone to be on those lakes after dark."

He also said visitors should be cautious when visiting lakes other than Stephens and Cosmo-Bethel.

"Those are the only two properties that Columbia Parks and Recreation checks in terms of ice safety and the thickness, so we just wanna make sure that everyone knows that, If they do do go to any other lake, we would like them to stay off of that," Huffington said.

Columbia businesses don't have to refuse service to unmasked customers
COLUMBIA—About 20 people filed complaints about other individuals or businesses not following the mask ordinance this weekend, according to the... More >>
9 hours ago Monday, July 13 2020 Jul 13, 2020 Monday, July 13, 2020 7:19:00 PM CDT July 13, 2020 in News
Share:
Email
Facebook
Twitter