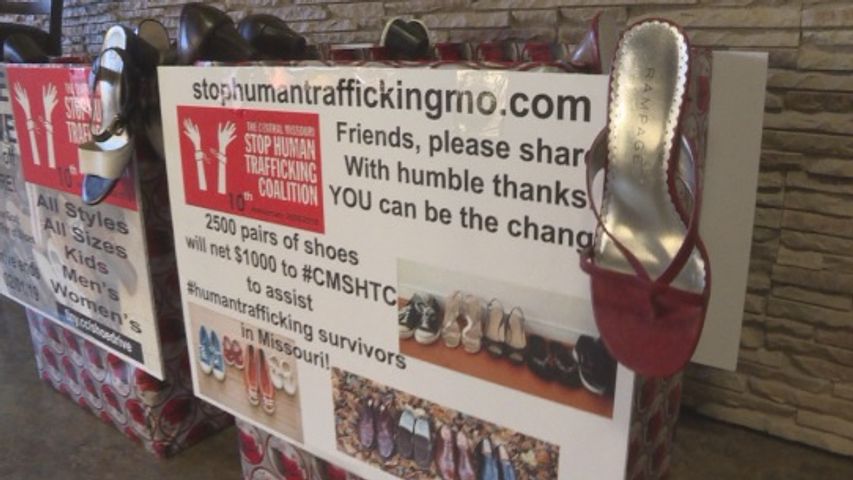 COLUMBIA - Throughout the month of January, people can donate shoes to help human trafficking survivors.

The Central Missouri Stop Human Trafficking Coalition is asking people to donate shoes to its drop-off locations at the Parkade Center on Business Loop.

The coalition, founded in 2008, is an organization that is designed to prevent and end forced labor and sexual exploitation of innocent children, women and men.

Nanette Ward, a board member and one of its founders, has been working with the coalition since it started. She said this is the first time the coalition has started a shoe drive.

"Hopefully people can make it part of their New Year's resolution to get rid of all their old shoes they're not wearing," Ward said. "People always want to clear out their closet and kind of start fresh. This is a good way to get rid of your shoes and benefit the coalition, to benefit survivors of trafficking that we serve right here in mid-Missouri."

The coalition's goal is to collect 2,500 pairs of shoes, which will net worth $1000 in return. The money will go toward helping human trafficking survivors. Ward said there's always a need, whether it's a need for medication, mental health services or other things like a cell phone.

"People who need a phone, either to replace the one they have or because they don't have a phone at all, it sets them up with a new phone and phone service so they can have that safety feature," she said. "It allows them to stay connected to safe people."

The month of January is dedicated as National Slavery and Human Trafficking Prevention Month. Ward said human trafficking has not slowed down and it is going on everywhere.

"There are so many different ways that traffickers are taking advantage of the many vulnerabilities that people have to get them into a situation where, in fact, they're being used against their will for the profit of someone else," she said.

Drop-off locations are located at the south and east entrances of the Parkade Center. The shoe drive ends Feb. 1.