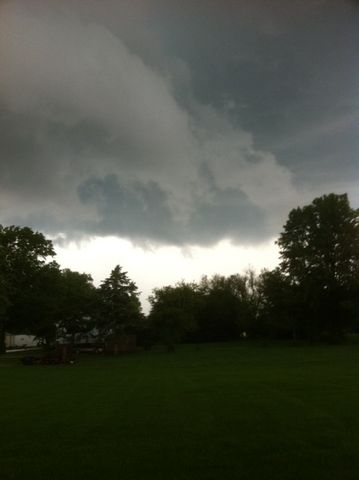 SALINE COUNTY - Storms left most homes near Slater completely untouched, except one wiped out entirely Monday.

Neighbors gathered throughout the evening to take a look at the extensive damage at the home.

One neighbor did not agree to go on camera, but did say he is housing a 24-year old who was the only person in the town at the time of the damage.

The man was trying to shut a window when the wind became too strong, and he was forced to take cover in the dining room. Once everything had passed, he was clearing debris off himself where the outdoor tool shed was located. He walked away from the disaster with only a bruise on his eye.

Cory Venable, a community member, said everyone is lucky no one was seriously injured.

Trained spotters indicated a tornado in the nearby town of Glasgow. Neighbors said they saw a twister coming over the hills toward the home, but the twister has not yet been confirmed by the National Weather Service.

The 24-year old lived in the home with his mother and her boyfriend, who is the homeowner. The homeowner and mother were out of time at the time of the storm damage.