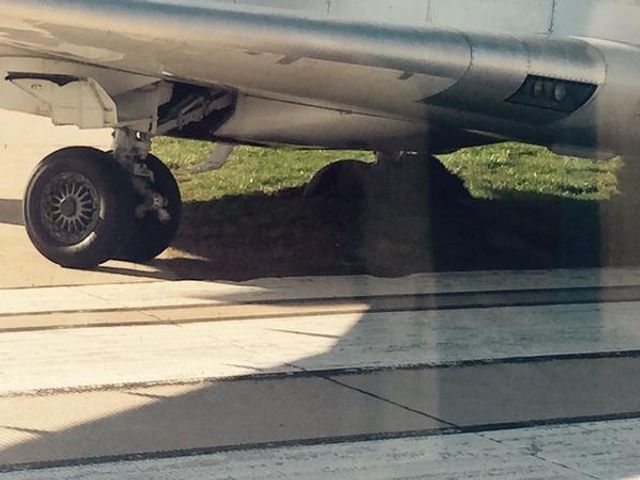 American Eagle flight 3624, operated by Envoy Air, was headed to Chicago when the CRJ-700's rear left wheel sunk into the mud next to the runway.

Robert Weiner, who was on his way to Tampa, said "You could feel immediately the wheel sunk down into the grass and mud and dirt and the whole plane was kind of tilted."

David Brown was another passenger on the flight, he said "I think I was just right above the wheel, and it just went ka-chunk just right into the mud. It was just kind of an instant thing."

Tarun Shukla, a visiting student from India who has a background as an aviation reporter, was also on the flight. Shukla said, "we were just discussing on the flight, with the co-passengers that, you know, maybe he's speeding just a little too much when he's taxiing."

"I was on the wing," Shukla said. "The wing was almost touching the ground."

No injuries were reported as a result of the incident.

Multiple passengers said the pilots attempted to force the plane out of the mud with engine power.

According to passengers, one of the pilots made an announcement to explain the situation and crews arrived to try to dig the plane out without success.

Passengers said about an hour later, they got off.

"As we saw when we got off, as you can see how deep it went, there was no way that it was just coming out on its own," Weiner said.

Passengers were bussed back to the terminal where the airline worked with them to make hotel accommodations and provide ground transport to the Lambert-St. Louis International Airport.

Brown, who was headed to Raleigh, said he had sympathy for the pilot. "I feel so bad for him," Brown said."I could see myself making like a little mistake in a car or something, clipping a curb. But, you know, It's a little more major when it's a plane."

When Brown spoke to KOMU 8, he said he was scheduled to be on a 5:30 a.m. flight to Chicago, a flight that was later cancelled aswell.

However, when he spoke to KOMU, he said the airline handled the situation as he expected. "A lot of apologies, that's appreciated," Brown said. "You know, they were professional about that, I like that."

"We gotta get home at some point," Weiner said. "You gotta roll with the punches."

Plane gets stuck in the mud at Columbia Regional Airport