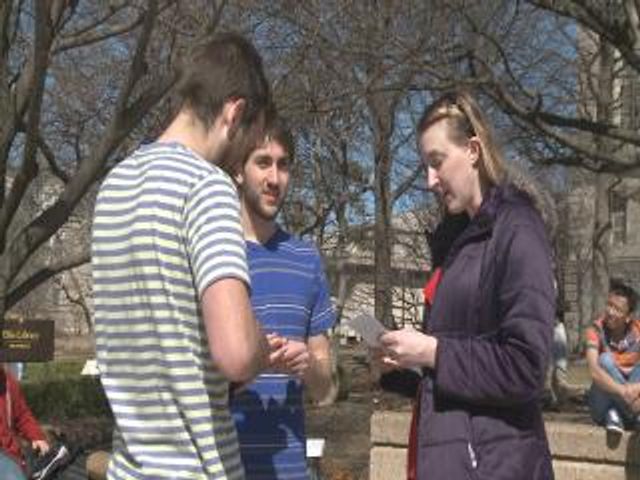 COLUMBIA - MU student parents gathered at Speaker's Circle on MU's campus Friday to petition to move the Student Parent Center to a new location on campus.

The Student Parent Center is currently housed at the University Village Apartments on campus. Chancellor R. Bowen Loftin announced Wednesday the buildings would be demolished this summer following the deadly collapse in February. Parents collected signatures on their petition in hopes to relocate the center. Chris Engelhardt and his wife decided to create the petition after they removed their four-month-old son from the day care. He said he was frustrated the university didn't have future plans in place for the day care.

The University released a statement Wednesday stating the complex will close on June 30 and be demolished shortly after.

"Going forward, I will ask representatives from student, faculty and staff groups to consider the feasibility of continuing to offer child care on campus for the children of students, faculty and staff," Chancellor Loftin wrote.

The day care currently serves 28 children, with a majority of them being children of student parents. In an email to KOMU 8 News, spokesperson Michelle Froese said the day care served 45 children in 2009. Froese said parent fees covered 80 percent of the center's budget in 2009 and currently covers about 54 percent.

"Decreasing enrollment correlates to decreasing parent fees," Froese said in an email. "As the percentage of funding from parent fees has declined, the University has had to cover the remainder, which is now almost 46 percent of the budget."

Dale Fitch from the Family Friendly Campus Committee said the committee plans to release a survey in April to gather more information on the need for a child services on campus.

"Right now we have no way of knowing exactly what those needs are so we are devising a survey that we will be sending out next month to get a better feel for what those demands are," Fitch said.

Parents said they put in a request to meet with Chancellor Loftin earlier this week and haven't heard back.