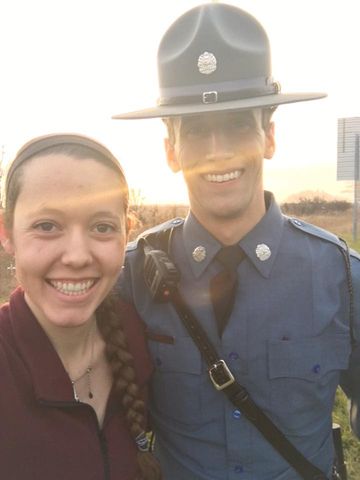 COLUMBIA - When Alexandra Carey posted a photo of herself a state trooper on Facebook Friday, she did not think much of it. By Wednesday, her post, alone, had nearly 2,000 shares.

Carey was driving east on I-70 in Callaway County when she drove over a small piece of wood on the road. Before she could steer to avoid it, she blew one of the tires on her car.

That's when Carey said State Trooper Ethan Mueller came to help her out.

"He asked me what happened, and I told him," Carey said. "Then he said, 'well, I can change your tire for you.'"

After Mueller changed Carey's tire, Carey said she asked if she could take a picture with him to post on Facebook.

When she checked Facebook the next morning, Carey said her post had more than 400 shares and her inbox was filling up with messages.

"A few people reached out to me saying, 'thank you for posting this,'" Carey said.

Carey said her positive interaction was a motivating factor for posting the picture. She also told KOMU 8 she thinks others focus too much on the negative with law enforcement rather than the positive.

"I'm really surprised at the impact that it has had," Carey said.

KOMU 8 spoke to Trooper Ethan Mueller over the phone Wednesday afternoon. Trooper Mueller said he was just doing his job but was happy he could help make someone's day better.