Students At Moberly Public Schools Plan to Learn From The Roof 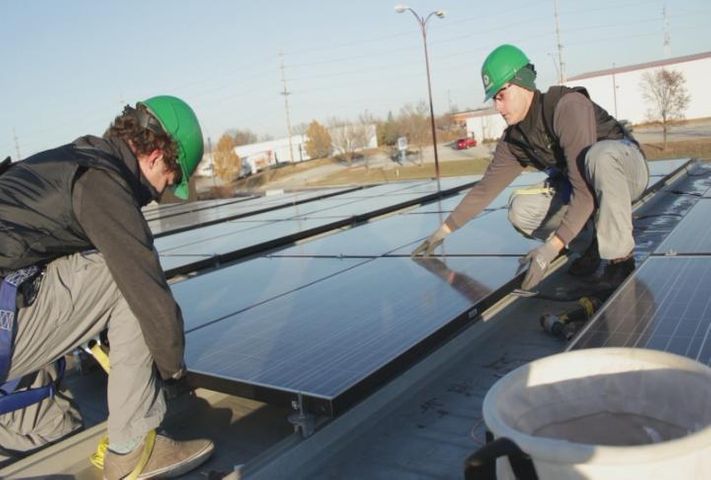 MOBERLY- With recent school board approval, one mid-Missouri school district is planning for new "green" arrangements. Over the past few months, Moberly Public School District started planning for the installation of solar equipment on the roofs of some of its schools.

The Moberly Public School District has partnered with EnergyLink, a Columbia-based contractor specializing in energy projects. CEO of EnergyLink, Chris Ihler, said Moberly is just one of the examples of what could be done to help relieve stress for many mid-Missouri communities.

"EnergyLink will own the equipment, and the equipment will be connected to the schools directly," Ihler said. "The solar energy [system] will deliver energy into the school, which will reduce their payments that they owe Ameren UE."

Superintendent of Moberly Public Schools, Gene McCluskey, said the solar panels are set to be installed on eight public school buildings in Moberly over the summer. Once installed, the solar panels would serve as an educational tool as well.

"What the students can actually do through the teachers and the curriculum base is see how much the solar panels are producing energy wise," McCluskey said.

McCluskey said the schools are planning to install "educational kiosks" somewhere in each of the eight buildings for the students to interact with.

"Renewable energy is something that they need to be exposed to and have an understanding of," McCluskey said.

However, Moberly schools must first fix its infrastructure problem before the solar panels can be installed. This is what Ihler was referring to when he said, solar alternatives can relieve stress from the over-utilized infrastructure.

"We just need to update some of our infrastructure on one of our buildings," McCluskey said. "It's in relationship to one of the power lines that runs across our district."

Ihler said it is natural for many growing cities to need infrastructure updates or alternative solutions to generate power. Once the power lines are upgraded, Moberly Public Schools can have the panels installed.

Which is why EnergyLink teamed up with a structured finance investment firm, Bertram-Kiel Holdings, to solve the issues of needing alternative power sources. Together, the two formed a new company called City Power Development Group. Ihler said the new company plans to solve many more cities energy problems.

The city of Columbia is another example of a Missouri city in need of more utilites. Columbia Water and Light recently recognized the problems of the overloaded electricity utilities, as well as sewer problems, and water problems. It says reducing energy consumption is one of the ways that the utility and the customer can save money.

"It also helps as far as keeping our energy consumption down," Utility Services Specialist Connie Kacprowicz said. "So we don't have to expand infrastructure as quickly."

Kacprowicz said Columbia plans to add a feeder line into the downtown area, a transmission line, and a substation on the southern part of town. She said this will help relieve some of the stress placed on the utilities because of over-use.

As for the Moberly Public School District, it's providing an education for the whole city when it comes to going green.

"We are and always will be working toward our mission of educating kids," McCluskey said. "In that process, we always want to make sure that we make them educated consumers, as well as responsible citizens, both for our community, for the state, as well as this planet."