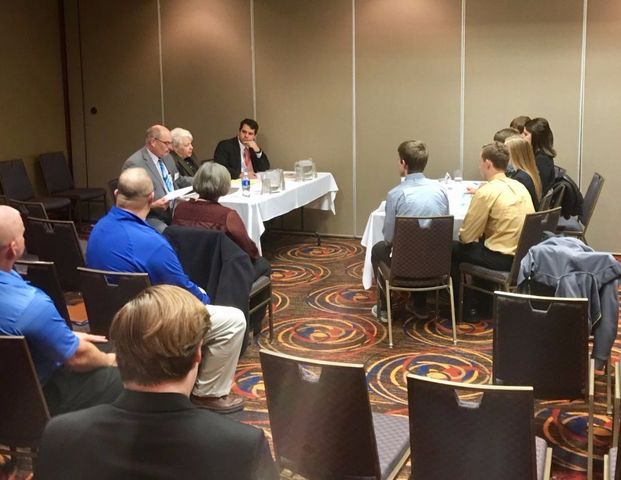 COLUMBIA - Over 70 high school students competed Monday at The Missouri Bar's annual "We the People" and "Show Me the Constitution." The students represented over 10 Missouri schools statewide at the competition at the Courtyard Marriott in Columbia.

All of the questions have to do with the Constitution and government.

"The kinds of questions asked are based off of the philosophical foundations of our government, the Constitution, both historical and the current applications of it, and this year we heard a lot of questions about the fourth amendment issues with iPhones," Director of Citizen Education for the Missouri Bar Millie Aulbur said.

She said the two competitions are pretty similar in the content that the students study.

"The Show Me competition is very similar to "We the People", but the students don't answer as many questions and they are not eligible to go to Washington D.C. next year, but they are eligible to win cash prizes," Aulbur said.

Another difference between the two competitions is that "We the People" requires a regularly rostered class, where as the Show Me competition can have its own class or simply an after school Constitution club.

Aulbur commended all of the teachers there with the students. She said it is a very difficult and challenging curriculum to teach to the kids.

One social studies teacher from Ste. Genevieve High School, John Boyd, said he and another colleague, Dustin Kueker, worked closely with their students to help them prepare for the questions and follow up questions as well as responses.

"They had to do a lot of additional research and work on figuring out Supreme Court cases, quotes and different constitutional ideas and supports that help them answer the given question," Boyd said.

Boyd said they brought six students with them for the competition. Both he and Kueker were allowed to sit in and watch their students be judged.

"Mr. Kueker was sitting there taking notes saying 'They need to answer this!' and we were in a situation where we couldn't really say anything," Boyd said. "You want the kids to do the best they can but you can't get out there and do it for them and sometimes that part is kind of tough."

Many of the judges were local lawyers who volunteered .

"The judges are largely from our 'Young Lawyers' section of The Missouri Bar. Some are even alumni. They want to be here," Aulbur said. "We also have some retired educators as judges too."

Aulbur said the judging is done through a scoring system.

"It's a complicated scoring based on knowledge, participation, application of constitutional knowledge and then we add up those scores." Aulbur said.

The winners of the "Show Me Constitution" were in first place, Nixa High School, in second place, Springfield Central High School, and in third place, Jefferson R-VII High School in Festus. They all won cash prizes for civic materials for their high schools.

Aulbur said this is the best day out of the whole year for her. She said she enjoys seeing all the students who want to be there, competing over the Constitution.

"It's just critical that our students understand how their government operates, why it operates the way that it does, it's the only way we will survive as a nation and that's why it's so encouraging today to hear these students intelligently talk about the Constitution," Aulbur said.

The Missouri Bar has hosted the We the People competition since 1999. The Show Me Competition was launched just last year.