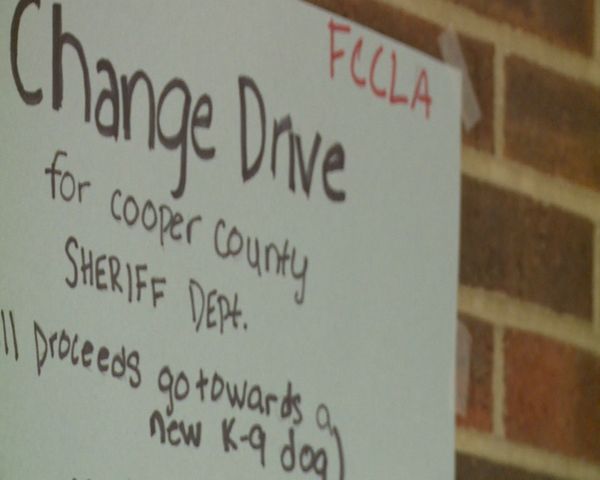 BOONVILLE - Students in Cooper County are holding a "change drive" in efforts to bring a K-9 unit to Cooper County.

Blackwater, Boonville, Bunceton, Otterville, Pilot Grove, and Prairie Home Schools are all working together to donate money to the Cooper County Sheriff's Department.

One student at Boonville High School started her school's program as a way to help her brother.

"It all started when my brother, who is a deputy sheriff for our county, wanted to get a K-9 dog, so he asked if I had any ideas for getting money," student Ivory Shikles said. "I thought about the high school doing a change drive and he really liked that. We started our change drive and he went to all the schools in the county and asked them if they would participate too."

Students believe having a K-9 unit is important for the community.

"It would help the overall community, whether it would be finding a lost person, or with a drug bust."

The "change drive" started less than a week ago and Shikles said it's starting off well.

"We ask for all change," Shikles said. "At lunch we go around from table to table and ask if anyone has change."

Boonville High School wants to raise $500 for the K-9 unit.

Cooper County Sheriff Jerry Wolfe said fundraising is their next step in the process.

"One of my deputies has shown a lot of interest in this and we have gone through the process of finding out what resources are available," Wolfe said. "We have examined a lot of those things and in that process we've found a pathway and made the decision to go ahead and pursue putting a K-9 unit into operation."

The Cooper County Sheriff's Department has already received a $5,000 grant to establish its first K-9 unit.

State Farm donated the money because it believes doing so would promote "safer,stronger,and better educated communities." The donation will help the office with its goal of purchasing the K-9, the equipment, and training.

"We went and made a number of contacts in the community and State Farm has stepped up and made a 500 dollar contribution into our account that we've set up," Wolfe said. "That gives us a big jump start on the money side."

After the K-9 has been purchased, the Cooper County K-9 unit will return to the schools and provide a demonstration for the students who raised money.

Other donors include: Orscheln's Farm and Home, Quinlan agency, and the City of Otterville.

The sheriff's department plans to have the unit running next summer.

Ivory Shikles, FCCLA vice president at Boonville High School, talks about the money she hopes to raise for the new K-9 unit that is coming to the Cooper County Sheriff's Department on Tuesday, Nov. 4, 2014, in Boonville, Missouri. The high school would like to raise $500. (KOMU/Hannah Smith)