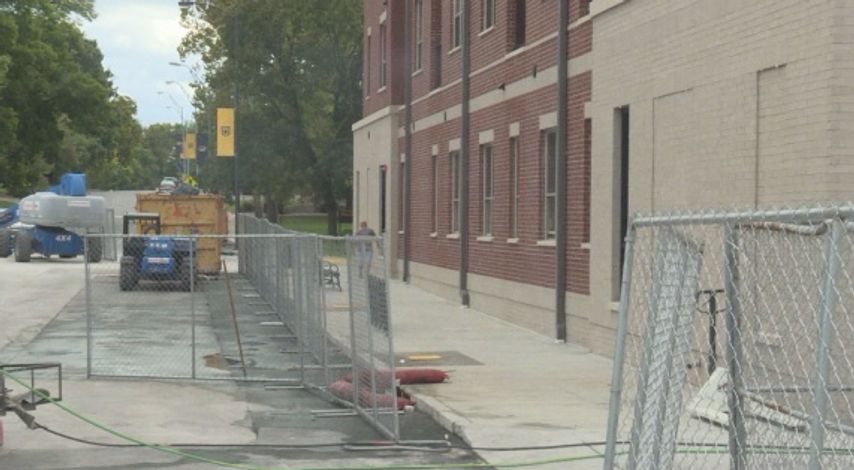 COLUMBIA - Almost a month after the building was supposed to be ready for move-in, a new Columbia student housing complex still isn't finished.

Students who were supposed to be living at the new Brookside apartments at Elm & 6th Street are living in other Brookside locations and an MU dorm that was closed because of low enrollment.

"It never really crossed our mind that the building wouldn't be finished," said Jack Skinner, an MU business major who is spending the first few days of his senior year back in the same dorm where he spent his freshman year.

"They proved to us that they're incapable of getting it done," he said.

Skinner said he is supposed to move in Wednesday morning - 26 days after the building was supposed to be ready for move-ins.

"I'm sure we're on for tomorrow morning," he said.

Lucy Reis, another student displaced by the delay, wasn't as optimistic.

Reis and Skinner are just two of the many students who aren't living where they're supposed to, a sign that Columbia's fast-developing downtown student housing literally can't go up fast enough.

"A lot of the work we had to do in site preparation, before the actual building, was some of the cause of the delay" said Jack Cardetti, a spokesperson for Brookside. "There were some old, both wastewater and stormwater, pipes that we did replace before ever starting the building and that did take some time early in the process."

Reis said, "I drove past my building a couple of time this summer and every time I was like, I cannot believe that it's not finished yet."

Brookside reached out to MU, hoping to find a place for its residents to stay. MU pointed the complex to Center Hall.

"This is one of the halls that we already have identified as one that we'll be using for guest housing," said Christian Basi, MU spokesperson. "So for the most part, it was probably ready to go."

The apartment complex paid MU $26,208 to house up to 72 students through Monday. Now, they're paying MU $28 per student per day. Basi said a number of soon-to-be Brookside residents checked out of the dorm Tuesday.

Cardetti said, "All of the residents will be moved into the building this week."

The move-ins will come after weeks of delay notices from Brookside, according to students who are supposed to already be in the new building.

But Skinner said he didn't know where he would go in the meantime.

"August, like, 12th or 13th is when we were finally notified where we would be living," he said.

Skinner said another email came Friday telling him he wouldn't be able to move until Aug. 30.

"And we're like, 'okay, great, two more days, like, how do we know if it's actually gonna happen then?'"

Reis said, "If they change it the day of, I am going to break my lease for sure."

Students said the complex is giving them a gift card and reducing their rent, so they don't pay for days they didn't live in the building.