Students walkout at Hickman High School in solidarity with Florida 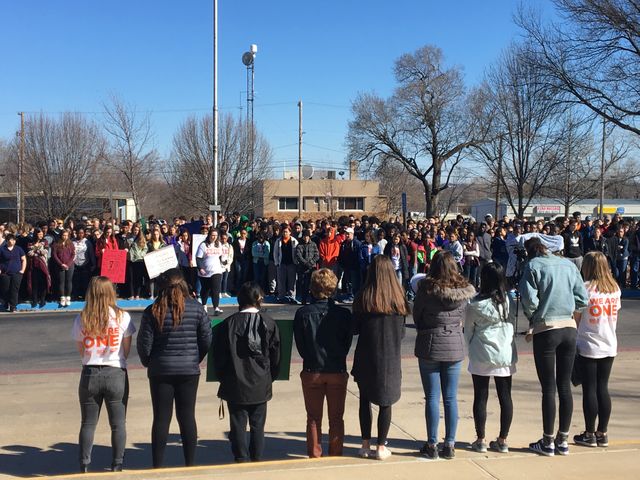 COLUMBIA - Thousands of students around the United States and around the world walked out of their schools Wednesday morning to stand in solidarity with the victims of the Parkland shooting.

The youth branch of the Women's March, EMPOWER, called for a national walkout at 10 a.m. in each time zone. It lasted for 17 minutes in honor of the 17 victims.

More than 200 Hickman students walked out of school to show their support. Many of the students hope the walkout will "wake up" politicians and let them know students are calling for gun reform.

"We really just want to make sure people in our community are aware that the youth of Columbia have a voice," Hickman High School student Ben Lewandowski said.

He and eight of his classmates decided to organize the walkout and sell shirts that read "#NEVERAGAIN" to honor the one month anniversary of the shooting.

Columbia Public Schools' policy regarding free speech allows students to protest freely. But it's a different case for teachers and administration.

Although teachers weren't able to directly participate in the walkout, some showed their support by wearing their own #NEVERAGAIN shirts.

Although there was overwhelming support from many students, some disagreed with the tactics.

"Walking out doesn't solve anything. Look how many walkouts are going on today, they're all calling for change, but they're all walking out," Hickman student Saige Wells said.

Wells said it's more important for people to take a stand, "be your own person" and educate yourself about different issues. He said teachers should be allowed to have firearms on campus to protect students in case of emergency and prevent incidents like the Parkland shooting.

Students who supported the walkout, however, believe their actions and voices do matter.

As the walkout came to an end, one student said "In a society where we do not have a vote, we do have a voice."