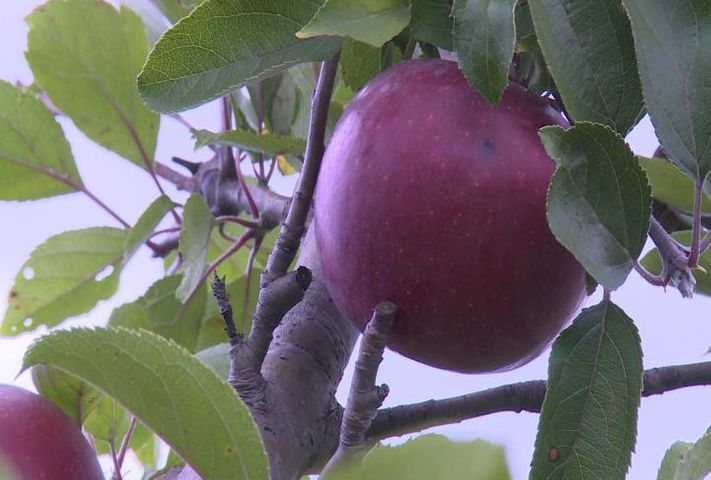 While Missouri's odd weather patterns are nothing surprising, how it impacts farms throughout the state varies annually.

One farm, just north of Columbia, in Mexico, is familiar with the crazy weather patterns. The owner, Sandy Binder, pays close attention to the weather because her orchard, Apples and Alpacas, is directly impacted by it. The wind, the rain, the hot summer sun, all these impact her orchard differently, and this summer, the odd weather left her bearing more than she could handle.

"It was actually a fascinating change this last year because what we normally expect to see is kind of a traditional summer pattern where we get a ridge of high pressure over Kansas, Oklahoma, Nebraska," Newberry said. "And that just kind of radiates heat our way. Not only that, but that high pressure sticks around for weeks at a time, so we don't get rain, and when we finally do, it's a big rain event."

This year, that was not the case.

"What was interesting about the summer of 2014 is that we saw the weather patterns of the winter before stick around, which is fascinating," Newberry said. "So instead of seeing a very traditional summer pattern that actually made us hot and dry, the summer of 2014 actually kind of gave us this different pattern of cool and wet."

Newberry explained that the amount of rainfall needed coming into the fall months is usually worrisome, but this year, because of the excessive rain this summer, it is not something mid-Missouri needs to worry about.  But, it may still be something that impacts local farmers, like Binder.

Binder is a one-man band; she and her husband started the orchard back in 1993, but now, she is left to plant the seeds, rake the dirt, worm the alpacas, and prepare the apples, mostly by herself. Needless to say, her farm has grown, but her help has dwindled. Binder does all she can in her older age to manage her crop and keep up with the never-ending list of tasks, but sometimes mother nature can't help but make things harder.

"The trees are just loaded with apples this year," Binder said. "And they had to be hand-thinned."

While this may seem like a good problem to have, it can have more severe long term effects.

"So, I've got about 20 trees that the branches are breaking on them because the trees are just overloaded," Binder said. "Well, that means that maybe next year they'll have a lot less fruit on them, or no fruit."

But, in between these top-heavy trees, are some brown branches, wilted and dead. This summer some of Binder's trees were hit with fire blight, a disease that kills the bark of a tree and turns the leaves brown and black. The trees end up looking as if they were scorched by fire. This fungus is a problem that comes from too much rain.

"It's a disease caused by wet springs," Binder said. "Something gets into the wood of the apple tree, and it kills it."

Binder tried to save these trees, and thinks maybe a few survived, but most ended up dead. Because of her older age, she chose not to replant any trees.  She started her orchard with about 900 trees, and now she is down to about 700.  Many of the trees killed from fire blight were just planted a few years back.

The Binders started this company to bring in extra income after she and her husband retired. The fear of the Social Security fall-out had her and her husband worried, so the two started Apples and Alpacas as a second form of income to take them through retirement.

When asked what keeps her motivated, her answer was simple.

"Well, I've got to move the apples, otherwise they get bad on the trees," Binder said.

Just like Binder, other farmers are seeing weather-related issues this season. Lemer Cernohlavek doesn't plant apples that are susceptible to fire blight disease, but even with these precautions, he cannot stop Mother Nature.

"It would be nice if we now had dry weather," Cernohlavek said. "Because it's making the harvest challenging, and you know, everything is wet, and I can never get out there to pick apples until the afternoons, if it isn't raining."

According to Newberry's predictions, the rain doesn't plan on stopping any time soon.

"So, my expectation is that continuing to see the pattern we've seen, we'll be just a little bit below average," said Newberry. "And we'll see a little bit of extra rainfall as well because once we've had a couple of these flash flooding rain events like we've seen in the last few weeks, it makes it very easy for flash flooding to occur again."