Support for "Bring Back Our Girls" Campaign Reaches Columbia 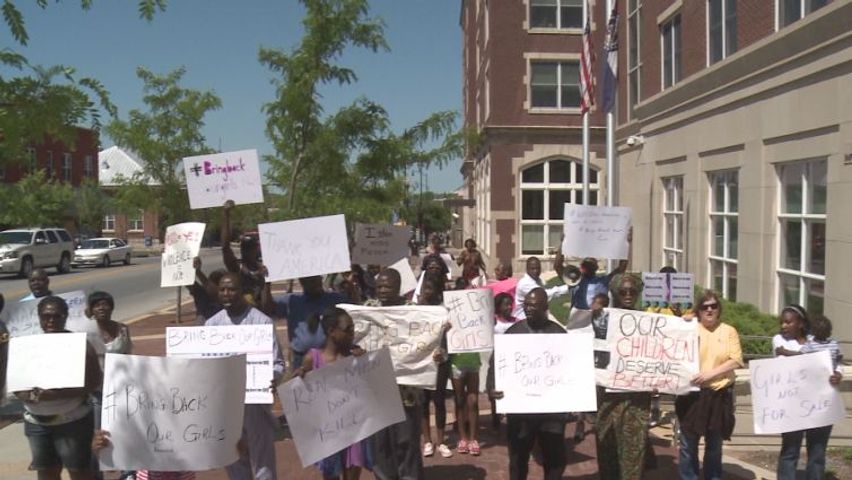 COLUMBIA - A world wide effort to help more than 200 abducted school girls in Nigeria reached Columbia Saturday morning. Dozens of residents passionately strode through downtown chanting "bring back our girls" in an effort to call for the release of the school girls abducted by terrorist group, Boko Haram, three weeks ago.

Boko Haram is the extremist group that opposes education for women, which prompted the abduction of the young girls.

The Mid-Missouri Chapter of community group Egbe Omo Oduduwa held the "Bring Back Our Girls" rally in an effort to support the girls in Nigeria and their families.

Former Egbe Omo Oduduwa secretary and supporter Wale Ibitoye said the affect of the missing girls is felt in Columbia.

"Now [Columbia] is our home. We are part of the community... Whatever happens to anybody back [in Nigeria] directly or indirectly affects us here."

According to reports, protests in Nigeria broke out because of the discontent people had for the Nigerian Government's lack of response.

Rally supporters in Columbia said they too are not happy with the way the Nigerian government is handling the abductions. Rebecca Oyelola is a 30-year Columbia resident, but is originally from Nigeria. She said "We need our Kids! We need them back home, they are our future. Our [Nigerian government] needs to do better."

As the group continued to march throughout downtown, bystanders joined in. People continuously honked their horns, stopped to take pictures and curiously cheered the group on.

Although the incident happened more than six thousand miles away, President of Egbe Omo Oduduwa - Mid-Missouri Chapter Femi Ogungbade said that no matter the distance, it affects every parent.

"No matter where you are, as a parent, as human beings that have blood flowing through your veins it's really not acceptable," Ogungbade said.

Once the rally reached the steps of the court house on Walnut Street Senator Kurt Schaeffer stressed the importance of recognizing the affects of the abduction locally.

"I believe this is extremely important," Schaeffer said."We need to get these girls back home."

Egbe Omo Oduduwa plans to continue organizing support for "Bring Back Our Girls." The group has yet to release the details of its next event.