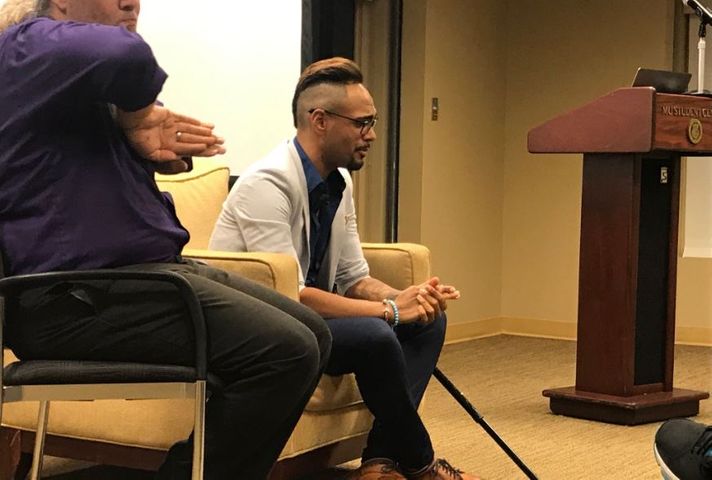 COLUMBIA - In the aftermath of the nightmare in Las Vegas, a survivor of the Pulse nightclub shooting preached healing and forgiveness. Angel Colon, a vocal survivor of the deadly attack in Orlando, shared his experience to a group of students Thursday.

“I ran about two to three steps before I was shot three times in my right leg,” Colon said.

Colon suffered a total of six gunshot wounds to the hip, legs and hands during the massacre. 49 people were killed during the nightclub shooting.

“I looked up, and all I could see were bodies everywhere,” he said. Colon said playing dead probably saved his life.

Following three surgeries and nine months of rehab, Colon looked to recommit his life to preventing gun violence and aiding those in need of emotional support following tragedies like Pulse.

Colon and a group of Pulse survivors will visit survivors of the Las Vegas shooting in the upcoming week.

“We can't let this push us backwards,” said Colon about the Vegas shooting. “Now it's our turn to show them some love, just sit down and talk with them. We know exactly how they’re feeling.”

Using his story as a testimonial, Colon urged students to get involved and help any way they could.

“You don’t really get to hear a lot of positive things that happen of tragedies like this,” said social work student Ashley Morgan. “At the end of the day love will always overcome hate.”

Though Colon has grown to forgive his shooter, he said he knows it will take some time for those impacted by the tragedy in Las Vegas.

“They need time, I know how crazy my mind was going that first week,” Colon said about forgiveness. “It’s a journey, but that’s my job now. I want them to end up there, but I know it’s the last thing on their minds right now.”

Four Front Marginalized Student Council, an umbrella organization for underrepresented students on the campus of MU, hosted the event.