Suspect in custody after Lake of the Ozarks manhunt 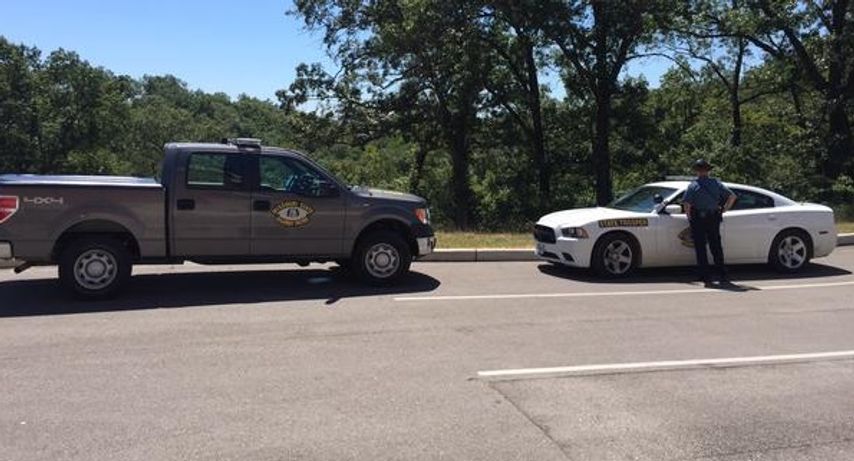 MILLER COUNTY (Updated: 9:08 p.m.)- The Missouri Highway Patrol said late Thursday afternoon the suspect in the manhunt near the Lake of the Ozarks was taken into custody after more than 15 hours searching for him.

The suspect was taken into custody on Creek Cove Lane near North Highway 54 in Osage Beach - two miles from where the suspect was originally spotted.

Lake Ozark Police Chief Gary Launderville said authorities were looking for 32-year-old John Fogle, of Hannibal, who had prior sexual assault and narcotics convictions out of Marion and Cole counties. Fogle is a registered sex offender, according to MSHP. Authorities said he was on the run in Miller County near Bagnell Dam Boulevard. MSHP Corporal Scott White told KOMU 8 News Fogle was wanted on several felony warrants.

A witness at MarineMax, a marina in the area, said authorities were outside of the marina, and helicopters were overhead around 2 p.m.

Lake Ozark Police Officer John Loveless said an officer spotted Fogle around 2:15 p.m. in the woods behind MarineMax. Troopers and police set up a perimeter around those woods, and officers were stationed on Oak Ridge Drive and Twin Oaks Drive.

Launderville said the search originally started after an officer pulled over a vehicle for a traffic violation at 1:20 a.m. near the Break Time on Bagnell Dam Boulevard. Launderville said Fogle was a passenger in the car, which had two other people in it, and ran from the vehicle a few minutes into the traffic stop. Launderville said authorities pursued Fogle but lost sight of him.

Fogle was spotted again around 9:00 a.m. in a wooded area between Route 242 and Heritage Elementary School. Authorities once again pursued him but lost track of him. Launderville said authorities notified the School of the Osage R-2 School District at that time. After that, Heritage Elementary School was on lockdown for the rest of the school day. He said the elementary school planned to dismiss at its normal time despite the lockdown. The district sent a letter to parents detailing the situation.

Please be advised, Heritage Elementary is currently under lock-down. Police are currently looking for a suspect in the area and we have been advised to keep everyone inside. Your children are in the safest place they can be. All doors are locked and police officers are securing the building. The children are not aware of what is going on outside our building. School is being conducted as normal. We expect this situation to be resolved as quickly as possible. We will keep you posted.

MSHP and an Osage Beach K-9 unit are on the scene at Heritage Elementary School Of The Osage in Lake Ozark. @KOMUnews pic.twitter.com/NkLeA5IJVN

MSHP said the units are looking for a man who has felony warrants and went into a wooded area. @KOMUnews pic.twitter.com/7jHs6XnVCt

[Editor's note: This story is being continually updated with the latest information available.]