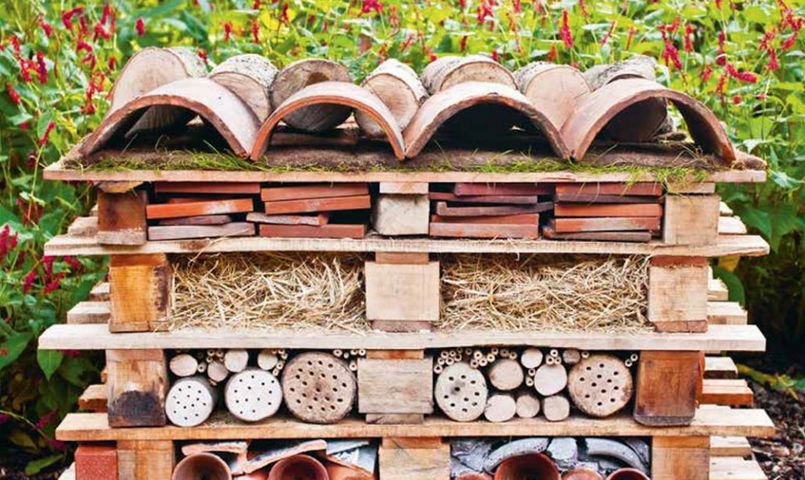 COLUMBIA – The U.S. Fish and Wildlife Service placed native bumblebees on the endangered species list at the start of 2017. Now, environmental group Sustain Mizzou is building native bee hotels to help give bees a sustainable habitat in Columbia.
Recycled material, drilled wood, flowers, dirt and bamboo fill garden pallet shelves to make up a traditional bee hotel.
Megan Tyminski, founder of Sustain Mizzou Beekeeping, said there are 452 native bee species in Missouri that require a different type of habitat than honey bees.
“Native bees don’t really get headlines and they don’t really get the same kind of concern, but those populations are also really important to conserve,” Tyminski said. “There are so many other bees that need our attention that I really think this project can benefit.”
The new hotels offer long-term habitats that are specific to native bee demands. Tyminski hopes they will help increase the bee population. She said she started Mizzou beekeeping because of the concern over the honey bee decline, but soon learned that native bees play just as important of a role with farming.
“Honeybees can be considered an agricultural product because we manage them in a system, but native bees are kind of just out in the wild,” Tyminski said. “To me, bees aren’t just about environmental issues, but also a social and economic issue.”
A recent study from the University of Vermont piqued Tyminski’s concerns, as the research measured native bee populations in relation to the number of farms and bee-dependent crops in each U.S. county. More than 30 counties in Missouri do not have enough native bees to meet farming demands, especially in the northern parts of the state.
“Some counties may be at risk for food security because of dwindling native bee populations, so it’s definitely an issue that stems larger than just protecting bio-diversity,” Tyminski said.
Native bees are declining across the nation due to widespread pesticide use on farms, climate change, increasing foreign pests and natural habitat loss. Chemical pesticides that farmers use to spray their crops limits options where native bees can pollinate.
“One of every three bites of food we take are thanks to a pollinator,” Tyminski said. “Plus, our earth would look very different and ugly without them.”
Many flowers are totally dependent on bee pollination. Almonds and pears are among the many foods also dependent on bees.
Sustain Mizzou hopes to spread the new bee hotels across Sanborn Field on MU’s campus within the next month. THe hotels are meant to be permanent structures and will only need annual upkeep and restocking when needed.
Tyminski said she sees the project as a small way to a make a big difference in improving Missouri’s environment.
“Missouri is very centered on agriculture, so making sure we do set aside and integrate habitat with these kinds of places is really important in conserving pollination services for years to come,” Tyminski said.
Tyminski said she hopes pollinator conservation will one day be more of a priority at the state level and encourages those interested to get involved with the Mizzou Botanical Garden, Missourians for Monarchs or Sustain Mizzou.