Swim program for children with autism teaches more than strokes 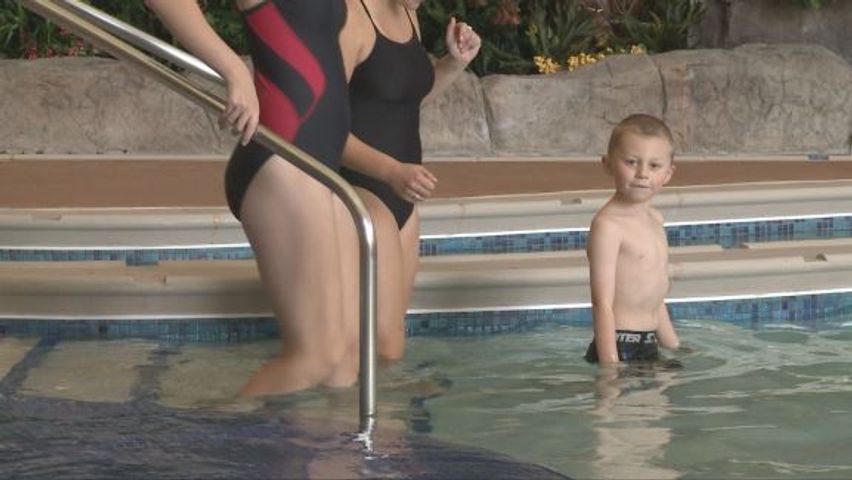 COLUMBIA - For many children preparing for their first swim lesson, the fear of the pool is normal. But, for children with autism, this concern is elevated.

A group of five MU occupational therapy students have been alleviating these concerns for children with autism through swim lessons tailored to individual attention and minimal distractions over the month of October.

Gabrielle Heckman, one of the program's founders, said her inspiration for this sort of program came when she was a swim instructor in Jefferson City. She was assigned to a child with autism, and said she was able to see him make amazing strives in the water.

"That's when my love for occupational therapy, and swimming, and autism kind of all developed," Heckman said.

Caroline Thompson, another one of the program's founders, said she had a similar story to Heckman on the creation of the program.

"I had a kid in one of my group swim lessons here at the Mizzou Rec who had autism, and from there I fell in love, Thompson said. "How cool is it that I can take swimming that I love and OT and just combine them together to make one thing so perfect."

The University of Kansas currently has a sensory supported swim program. Heckman and Thompson traveled to KU this past summer to receive specific training on how to work with kids with autism in the pool.

Heckman said the desire for a swim program in Columbia focused around children with autism peaked immediate interest - and for a good reason.

According to the National Autism Association, "91% of the deaths reported for children with autism in the U.S. in 2009-2011 were from accidental drowning."

"What we have is two instructors to one child, so there's a lot more individualized attention," Thompson said. "We take a bunch of skills and let them learn them on their own."

Leslie Dinwiddie, the mother of five-year-old Dillon Dinwiddie, had some initial concerns and doubts about her son's progression in the pool at the start of the swim lessons.

"I didn't even know if he would get in the pool because we have never been in a big pool," Dinwiddie said. "He's never swam or been submerged fully in water."

Prior to beginning the program, Dinwiddie spoke with Heckman on her fear's regarding Dillon's progress.

"I told Gabbie that I don't know if Dillon will even get in the pool," Dinwiddie said. "She [Gabbie] said, 'That's okay, that's what we are here for."

Dinwiddie said the instructors have been very focused on working with Dillon at his own speed.

"The girls were great about working with Dillon at his own pace and not forcing him to do anything he was scared to do," Dinwiddie said.

But, Dinwiddie said Dillon's progress has blown her expectations out of the water.

"This whole time they have been working with him to get him to put his face in the water because he is really fearful of getting his eyes wet," Dinwiddie said. "Today was the first time he put his whole face in the water and it was a huge deal for him."

Dinwiddie also said that the confidence Dillon has gained in the pool can be transfered over into different aspect of his life.

"We have been able to relate that to starting kindergarten this year and his first bus ride," Dinwiddie said. "This gives him the confidence to know that he can do so much."

Both Heckman and Thompson said the only struggle they have faced over the course of the lessons is not being able to see the kids enough.

"I think the struggle is only seeing them once a week," Heckman said. "I wish we got to do it more and for a longer period of time."

But, the children in the program are not the only ones who have learned a lesson or two along the way.

"It has taught me so much about myself and about helping other people, which is what we want to do," Thompson said.

The group of occupational therapy students plans to have another session of swim lessons this spring, and they already have a waiting list.

They are hoping to receive an Autism Speaks grant at the end of December to pay for different aspects of the swim lessons, as well. Heckman said the grant would pay for continued use of the Mizzou Rec and also wet suits for the children.

At the end of the day, Dinwiddie said this program has been a "blessing" for she and Dillon.

"To be able to do this and not have to pay much, if anything, is huge," Dinwiddie said. "These girls have been so ambitious to put this together."