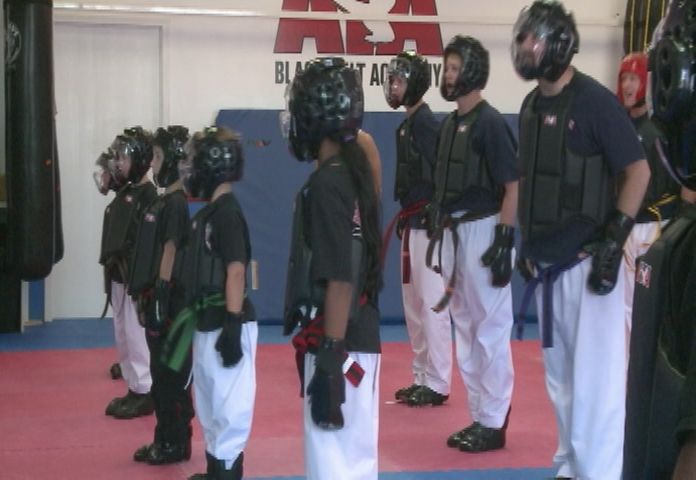 JEFFERSON CITY, MO - The Korean sport of Tae-Kwon-Do is gaining popularity in Mid-Missouri. Jefferson City's Howards ATA Martial Arts Facility provides a place for champions of all ages to practice their craft, guided by masters who break down sparring sequences into single movements.

"Sir I will practice in the spirit of Tae-Kwon-Do," chant the students to their masters.

"You put all the gear on and it's basically just point sparring. You score by throwing kicks and punches on your opponent," said 2011 World Champion Corbin Howard.

Rob Howard, the ATA Martial Arts Owner, said, "To break down forms is basically a set of movements and we teach students how to memorize a set of movements in a pattern and you can play sports your entire life and never have to memorize movement patterns. So its excercising a part of your brain that never gets exercised."

Corbin Howard is no stranger to victory, and his love of winning never fades no matter how many times he comes out on top.

"This is my sixth title and I don't know every time I win I still get the same feeling, it hasn't changed," said Corbin.

This World Champion is all too familiar with the concept of black belts as well.

"There's nine belts going up to black belt and then once you get to blackbelt there are nine different degrees and each time you get a certain degree blackbelt you have to obtain it for that many years before you get the next black belt," Said Corbin.

Kids like Corbin find their way to the sport for a variety of reasons.

Said Rob Howard, "The most common reason that students start martial arts is because of confidence, a lot of kids get bullied at school and so their parents bring them here for the confidence level."

After participating for ten years, Corbin returns in hopes of pursuing his goals.

"When I get done with school I'll open a school or I'll open a taekwondo school and I'll have that for the rest of my life."