TARGET 8: 75% of lobbying gifts not shown in lawmakers' records 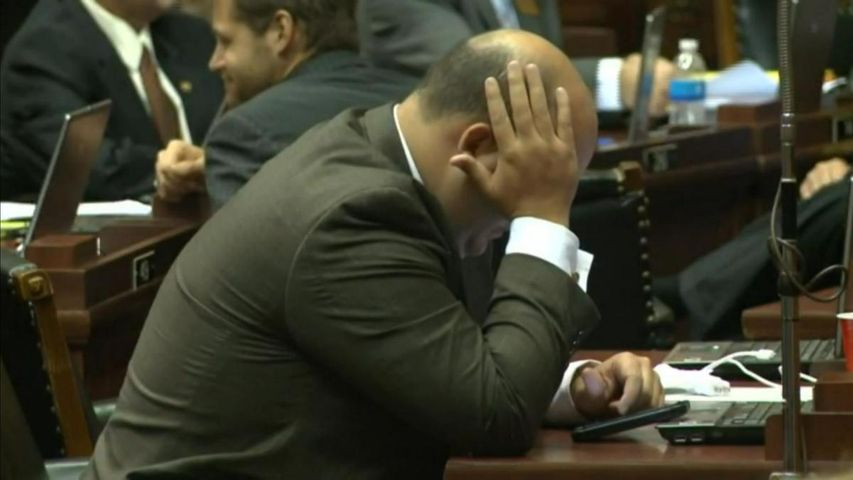 COLUMBIA - In an environment full of partisan politics, a systematic issue for both parties is receiving gifts from lobbyists.

Throughout the last 24 months, lobbyists and organizations spent $1.8 million on gifts for Missouri lawmakers.

Missouri is the only state that puts no restriction on how much and on what type of gifts lobbyists can give lawmakers. As the rule stands now, the only requirement is that it is reported, so the public can see.

Lobbyists report how much money they gave the gifts and to whom those gifts were given. Lawmakers report how much money, and from whom, they received in gifts. The report is published on the lawmakers' page on the Missouri Ethics Commission website. However, this only accounts for some of the money. Lobbyists, especially in recent years, have taken to buying gifts or dinners for groups of lawmakers. While the lobbyist reports the number, gifts to groups do not go on any individual lawmaker's record.

According to a report by St Louis Public Radio, three-quarters of lobbyists' dollars went toward groups. That means the public doesn't know whom the recipient was for 75 percent of the money received by lawmakers. That's up 15 percent from previous years.

It happens with some regularity. Sometimes the group gifts are as simple as providing lunch to the entire Senate. Other times though it is a lobbyist group taking out entire committees to dinner.

John Bardgett & Associates, which represents companies like Anheuser-Busch, and Bank of America, provided almost $60,000 in gifts to lawmakers in the last two years. The biggest "gift" was a $4,827 dinner at Columbia's C.C. Broilers in Columbia, for the Utilities Committee. Bardgett represents multiple utility-based companies, including the Missouri Cable Telecommunications Association and the Little Blue Valley Sewer District.

John Bardgett, president of the firm, said the dinners do not hurt the legislative process. "It's not like the lawmakers say 'hey you paid for this dinner, how do you want us to vote for this tomorrow,'" Bardgett said "We talk about family, how the kids are doing, something funny which happened on the floor that day."

Bardgett & Associates serves a wide variety of clients, and takes out a wide variety of committees for expensive dinners. In fact, the company picked up the $1000-plus tab for dinners for the the following committees: Economic Development (three times); Professional Registration and Licensing twice); Budget, Financial Institutions (four times); Local Government; Higher Education; Children, Families and Persons with Disability; Appropriations; Financial and Governmental Organizations; and Elections (twice). That's more than $25,000 of gifts on those dinners alone, none of which will ever be reported on a lawmaker's record.

Bardgett said he and other lobbyists will play by whatever rules there are, and abuse of these rules are "rare and isolated instances." He said there is not an issue between lobbyists and lawmakers and that undue influence is more of a perception than reality.

During an interview about his ethics bill last session, Rep. Caleb Rowden, R-Columbia, said the bill was more about changing the perception of politics in Jefferson City. Rowden said lobbying is not really much of a problem.

Bardgett said, if the ethic rules changed, it would "save him money."

The biggest spender during the last legislative term, Ameren, spent more the $90,000, including a $16,000 meet and greet with the Westinghouse CEO. Westinghouse is a company that specializes in nuclear reactor technology, including the technology in the Callaway Nuclear Power Plant.

Another big lobby group, The Missouri Hospital Association, spent more than $75,000 last legislative term. It took out committees such as Appropriations, Budget, Veterans Affairs and Health and  Health Care Policy for dinners with tabs exceeding $1,000.

This year, Missouri lawmakers appropriated more than $200,000 million for a new building and repairs at Fulton State Hospital. However, lawmakers did not expand issues like Medicaid, which would have provided millions in health care.

Lobbyists are usually behind the scenes of the legislative process, representing clients' interests in Jefferson City.

According to Bardgett, the main duty for lobbyists is to help their clients understand the legislative process. Lobbyists let clients know of legislation which effects them, and work to advocate their clients' position.

"The most effective way to influence lawmakers is through grassroots," according to Bardgett "When your lawmaker goes in for his flu shot, and the local doctor says hey, you should vote no" on a senate bill, "that's pretty effective grass roots movement."

Bardgett said organizing his clients includes finding constituents in lawmakers' districts. Doing that, he said, is the best way to reach lawmakers in a meaningful way.

If Bardgett's legislation passes, the process is a little more complicated. According to Bardgett, his process starts in August, reaching out to lawmakers, usually by dropping by the district for a cup of coffee or giving them a call. He then brings up the potential legislation seeing if the lawmaker would be willing to sponsor the legislation and bring it up to leadership.

Bardgett said his 34 years of experience as a lobbyist helps with this process because of his connections and the years of trust he has built up.

Once a sponsor is found, Bardgett said he often looks to the other side of the aisle for a co-sponsor, and for other lawmakers who would be interested in signing on.

According to Bardgett, he then looks at which committee is the bill's likely landing point and feels out the committee chair.

The issue with gifts can be simple. First, Missouri's ethics laws are some of the most lenient in the country, and there are no signs of changing. Year after year, ethics bills meant to solve the problem fail. With no restrictions, lobbyists pour almost $1 million into the Missouri Legislature.

Although three-fourths of the money going to lawmakers is undisclosed, the money which is given to individual sometimes reaches into the tens of thousands. The lawmaker receiving the most, Sen. Kiki Curls, D-Kansas City, receiving almost $16,000 dollars in gifts throughout the last legislative session. She received more than $3,000 in travel expenses from the Missouri Biotechnical Association and Microsoft. Curls also got free tickets in 19 different instances, with a total face value of $3,390. Curls is on the Appropriations Committee and General Laws committee, and took almost $10,000 from energy companies.

The vice-chairman of the Governmental Oversight and Fiscal Responsibility Committee, Ryan Silvey, took the second highest total of gifts of any lawmaker last term, at more than $15,000.

Tom Dempsey, vice-chair of the Rules, Join-rules, and Ethics Committee came in fourth. Since being elected in 2007, Dempsey received almost $45,000 in lobbyist gifts.

The chairman of the Rules, Joint-rules and Ethics Committee is Senate Majority Leader Ron Richard. He has received $30,670 since being elected in 2010.

The biggest spending group in the state capitol are lobbying and consulting groups, who represent multiple clients on multiple issues. These firms are known for their personal connections and are, at times, former lawmakers themselves. They spent $346,559 dollars on behalf of their clients throughout the last term.

Health care groups represented the second largest amount for lobbying money spent, at $251,685. The last couple of years have seen a lot of health care legislation reach debate, such a tort reform and Medicaid expansion.

Other industries to spend more than $100,000 on lobbying include government/education, energy, food/agriculture/beverages, financial institutions, telecommunications and cable.

Lobbyists' gifts cover a wide variety of items and experiences. Far and away the most popular gift is food. Whether it is a lunch with a private lawmaker or a catered meal for the entire Missouri legislature, food is the biggest expense for lobbyists. According to a report by Lobbyingmissouri.org, almost 90 percent of funds went to providing meals.

Second was entertainment, things like tickets to Cardinals games. The University of Missouri often contributed free tickets to lawmakers for different football and basketball games. Occasionally lobbyists would pay for things like a free round of golf. Missouri Primary Care Association paid for a $161 round for Silvey, R-Kansas City.

Some gifts including things like airfare and free hotel stays for lawmakers. Lobbyist firm Flotron & McIntosh paid for multiple flights and hotel stays in San Jose, California, to people such as Sen. Paul Lavota, D- Independence, for a price tag of more than $1,200. Travel-related gifts were extremely rare.

Ethics reform bills go to the Missouri Legislature floor in both chambers, but usually are defeated. This has been the case for years. Back in 2010, Gov. Jay Nixon called for "meaningful ethics reform," but nothing has been passed. The main issue, according to lawmakers, is the bills don't go far enough.

Rep. Mike Colona, D-St. Louis, said that's true even with campaign reform, because people would "just find another loophole to get around it." Colona received more than $9,000 in lobbyist gifts last term.

A new set of ethics reform bills will likely be pre-filed this December.