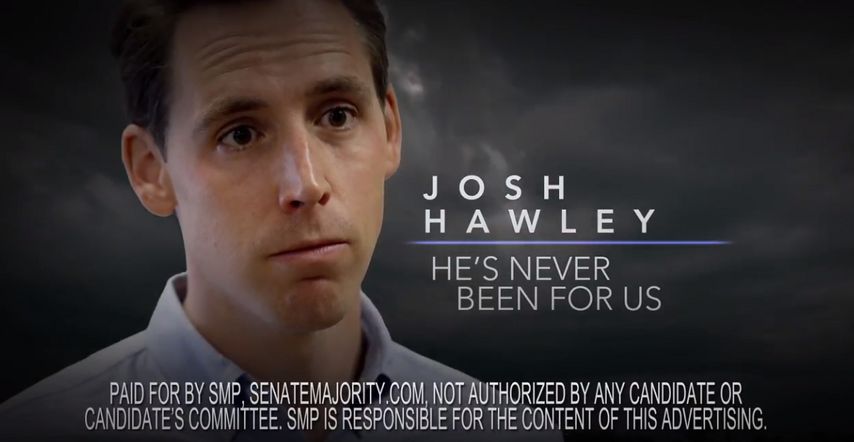 An ad by the Senate Majority PAC paints Hawley as complicit with insurance companies in trying to take away coverage for people with pre-existing conditions. The PAC supports Democratic incumbent Sen. Claire McCaskill.

Who is responsible for the ad?

The Senate Majority Pac is a Democratic Super PAC with the sole stated goal of building a Democratic majority in the Senate.

Its YouTube page shows the group has put out a number of attack ads, many of them targeting Republicans for their stance on the ACA.

According to Open Secrets, SMP has spent more than $14 million on ads both attacking Hawley and supporting McCaskill.

Claim 1: Hawley worked as a lawyer for a corporate lobbying firm that represented insurance companies.

According to his LinkedIn page, Hawley worked for the law firm Hogan Lovells from 2008-2011 as an appellate litigator.

Hogan Lovells receives millions of dollar each year to lobby for a number of different companies in a variety of industries.

Among the companies Hogan Lovells lobbies for are the insurance firms AFLAC, USAA, Zurich Financial Services and Lloyds of London.

Verdict: We find this claim to be true.

Claim 2: Hawley is benefiting from $18 million of dark money.

While this money does come from outside the state of Missouri, that doesn't mean it's dark money.

According to Open Secrets, dark money comes from organizations who don't disclose the identity of their donors. Dark money groups are most likely to be political non-profits.

The SLF and the NRSC are both political action committees and are required to disclose their donors. But if they accept unlimited contributions from dark money groups, they become dark money groups themselves.

KOMU 8 News has no evidence that either the SLF or NRSC are accepting money from dark money groups.

It is important to note that the SMP, the group responsible for the ad, is on the same page as the SLF AND NRSC, and runs the same risk of becoming a dark money group.

Verdict: We find this claim to be misleading and needing context.

Claim 3: Hawley filed a lawsuit that would allow insurance companies to deny health insurance to people with pre-existing conditions.

We have already gone over this claim in an earlier Fact Check. Hawley's name is on a lawsuit filed in Texas that tried to get the ACA thrown out on the grounds of constitutionality.

Verdict: We find this claim to be true.

FINAL VERDICT: We find this ad to be mostly true but needing context.

It's important to note the difference between dark money and outside money.

How much of that money is coming from dark money groups is unclear.

A statement from the Hawley campaign said he has repeatedly voiced his support for protecting people with pre-existing conditions and attacked McCaskill for supporting a single payer healthcare system.

The McCaskill campaign had not responded by the time of publication.