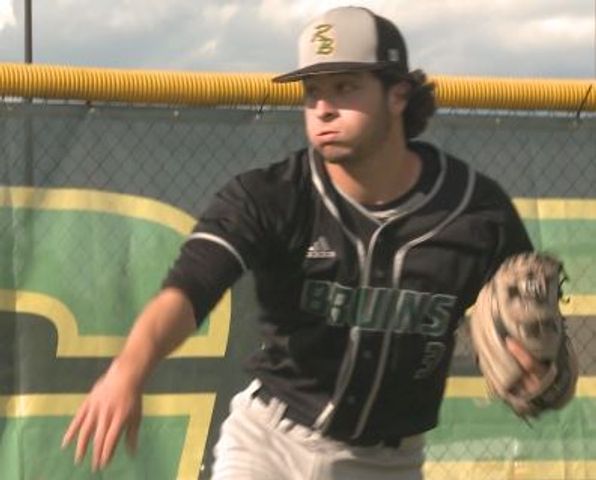 COLUMBIA - Although the probability is low, players being hit by a batted ball is a growing concern at the major league level, particularly for pitchers.

Eight major league pitchers have been hit in the head by a line drive since 2013. Target 8 decided to look at the current protection guidelines for high school baseball players in mid-Missouri.

According to the MSHSAA 2016 Baseball Manual, "Head protectors shall be worn as provided in Baseball Rule 1-5. All protectors will carry the NOCSAE Seal of Approval and warning label." That requires batters to wear helmets, but not fielders.

MSHSAA Communications Director Jason West said Article 5 of the same rule gives all players in the field the option to wear a face mask as long as it has a non-glare surface.

Even though this rule is put in place by the National Federation of State High School Associations (NFHS), West said he doesn't see many high school baseball players choosing to wear a face mask.

"We haven't seen a lot of it, if any, in Missouri yet," West said. "That may be coming. It normally starts at the younger levels coming up."

West said he sees more softball players wearing headgear because they start wearing it at a younger age.

"That really started at the youth summer league level and then when those girls went into high school and into college," West said. "Now you see it all the time at the collegiate level. As they moved up, they were more comfortable with it and it was just part of the game at that point. When the rules were changed to allow headgear or make it mandatory in some cases, it was a lot easier for those girls to transition into that."

West said the difference between baseball and softball also results from baseball taking its own path in research.

"Baseball has kind of taken a different direction especially with the use of their restrictions on bats, and they've done a very good job of monitoring and testing the bats and bat speed, the contact of the ball off the bat, and how quickly the ball comes off the bat," West said.

West said the NFHS made a big push a few years ago to make the ratio closer to alleviate the risk of line drives. The NCAA also changed its bats to meet BBCOR standards in 2011.

The current standard used for non-wood bats by the NFHS and the NCAA is the BBCOR standard. According to West, all BBCOR certified bats must have a length to weight ratio no greater than -3.

"If you have a 33 inch bat, then the weight of that bat couldn't be over 30 ounces and that's how it progresses," West said.

The goal of the BBCOR standards is to make metal bats perform more like wood bats and improve player safety.

"You could have a 33 inch bat that weighs 27 ounces," West said. "Now the batter can get that bat through the zone a lot faster without as much drag and make the ball come off the bat faster because he or she can use their own strength. Having to have a heavier bat with the length, that causes the bat to slow down and the ball doesn't come off as fast."

Another limitation placed on pitchers in the 2016 manual is the number of innings they are allowed to throw. The manual states, "A pitcher may not pitch in more than 10 innings during any consecutive three day period."

"The other thing we began this year was pitch counts and kind of limiting the use of pitchers' arms because we found sometimes those big hits come when a pitcher has been throwing too much," West said. "He or she might be a little tired and drop a pitch right down where it doesn't need to be. Having fresh arms can help control the ball on the pitching level and alleviate some of those line drives as well."

Dr. Aaron Gray is the doctor for the baseball team at the University of Missouri. He said he feels the tradition of the game prevents players from wearing headgear in the field.

"Baseball is a game of tradition and history, and so I think naturally players want to continue the traditions that were passed down," Dr. Gray said. "Putting a helmet on a pitcher or a face guard on a pitcher is very revolutionary and a different type of thing than most players and pitchers are used to."

Rock Bridge High School head baseball coach Justin Towe said he has not had any conversations with his coaching staff regarding headgear protection for players in the field.

"I think baseball players kind of figure that's part of the game," Towe said. "Batters have enough pads...you know they might as well be catchers at times when they have elbow pads and ankle pads. Positional players have their gloves and their athletic ability, so in all honesty, it rarely ever comes up."

In an ESPN.com story published back on Feb. 17, 2013, former major league pitcher Joe Martinez opened up about the topic. Martinez was hit by a line drive while pitching for the San Francisco Giants in 2009.

"They [pitchers] aren't going to want anything that makes them look goofy," Martinez said. "It sounds ridiculous, you think safety would be so much more important than what you look like, but baseball players like looking good."

Towe said this sort of stigma is part of the equation as to why baseball teams are reluctant to wear headgear protection in the field.

"I think that's probably some of it, and some of it is it's baseball," Towe said. "It's hardball. It just kind of comes with the game."

West said he feels there is a similar stigma at the high school level.

"We're still dealing with high school boys that are concerned with their looks," West said. "Baseball pitchers sometimes have a fragile ego because they're the one everybody is looking at, so they have that pressure on top of everything else. Every pitch, you're the one somebody is staring at be it a 500 seat stadium at the high school level to the major league level."

"There's a lot of players who just want to look good," Jennings said. "There are some brands out there that say 'Oh, we're going to protect you,' but really it's all about the accessories for a lot of guys."

"I think it's more focused on the discomfort some of the protective gear brings or carrying extra weight," Goins said. "Sometimes it feels unnatural to carry it. Most people don't have to face getting hit by a baseball in your private areas or in your heart or anything like that, so most people don't worry about it."

"I think the higher level you get in baseball and the more precision you need, having more equipment on your person, especially on the defensive side, may weigh you down and get you off your game just enough that you're not at the elite level anymore," West said.

Jennings said he sometimes thinks about the risks associated with his position, while Goins said he doesn't really think about it.

"It never really crosses my mind until I get a rocket right back at me," Jennings said. "I have been hit in the shin before. I've almost had my head taken off a couple times already this season. Sometimes I do look back, and I think I really wish I had something protecting me. At the same time, some of the safety precautions you have to take don't really look that great on the field, so I'll admit sometimes I stay away from them just because I want to look better on the field."

"I mainly trust my reactions to either get out of the way or catch the ball, but it's not really a worry of mine," Goins said.

Target 8 asked Dr. Gray if he thinks anything can be done to change the stigma concerning players wanting to look good.

"I worry that it might take someone getting seriously injured or possibly losing their life or having serious harm for that to come," Gray said. "I know there has been some work on getting padded pitching helmets but unfortunately the ones they have now are quite large and look different. I'm hopeful that through future technologies we can come up with equipment that can protect pitchers but maintain the look and feel of tradition."

West said he feels it might take a few injuries for protective gear to be mandated.

"I don't know if it will take a severe injury, but it may take a couple injuries before people really get into 'Ok let's take a look at this again' and get it fresh in their mind," West said.

Gray said any changes geared toward protecting players need to be the result of good data. KOMU 8 News asked Gray these three questions:

1) How would you go about collecting data if you were in charge of the research?

2) How much does seriousness versus probability of injuries factor into your process?

3) What data would you find the most helpful in determining what needs to be done to increase safety for pitchers?

1) You first need to figure out how often pitchers get hit by batted balls in the head face and how serious these injuries are.  This will be different for each level of baseball (Little League, high school, college, MLB, etc)  To do this you need to figure out how much exposure a team’s pitchers had to this potential injury (need to know how many games each team played) and then you need to track how many times a pitchers gets hit by a ball in the head/face and how bad the injuries are.  Major league baseball is doing this.

2) In injury prevention we like to base our future decisions on previous measured data. That is why #1 above is so important.  You need to know how often it happens.  Unfortunately, sometimes a certain injury can be very, very rare but when it happens it can be a serious injury.  Sometimes a serious injury can be so unusually rare that it doesn’t make sense to protect every single athlete from that potential injury.  This is a complicated subject.

3) We need to know if preventive measures (rule changes, extra equipment) actually works to prevent the pitcher from being hit in the head/face.  NCAA changed their bats a couple years ago to make the ball not come off as hard and this was based on lab testing of different bats.  Protective face guards or helmets for pitchers need to be tested to make sure they work.  Real players also need to test it to see if it impacts how they play the game because if it impacts there normal performance they won’t wear it.

The NCAA and NFHS have made strides when it comes to monitoring the bats being used. The player is currently in charge of choosing whether to wear protective gear in the field at the high school level, and holding onto tradition brings a fair share of risks.