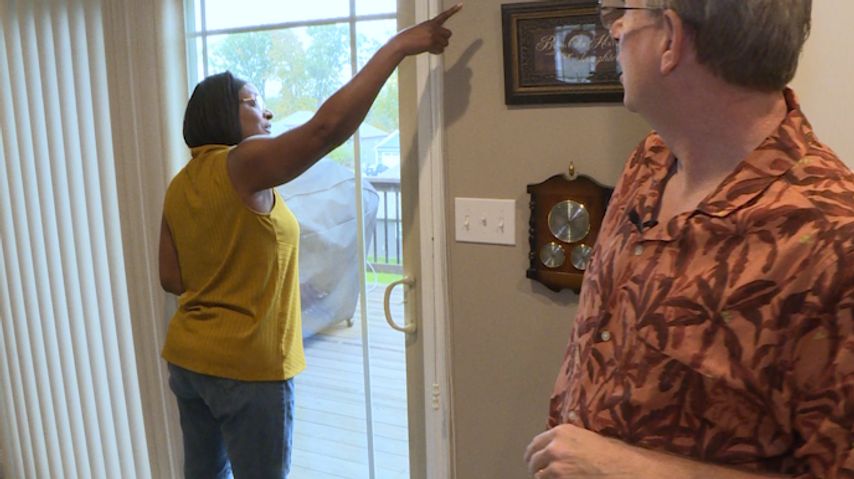 COLUMBIA - Greg, Phyllis and the rest of the Smolens family moved to Columbia from Arizona 14 months ago.
"My husband got offered a job in Jefferson City," Phyllis Smolens said. "But then we found Columbia and it was perfect."
Greg and Phyllis visited Columbia in July of 2017 and had limited time to find a brand new home.
"We really only had a day," Greg Smolens said.
Phyllis said they chose the home because they both fell-in-love with the balcony. Greg and Phyllis purchased a Wilcoxson Custom Home for $340,000.
It's been over a year since moving in and the Smolens feel short changed. Greg Smolens said it seemed like a new cosmetic issue popped up every day.
"The issues just started to pile up," Greg Smolens said.
“We have had to have the dishwasher replaced," Phyllis Smolens said. "We spent $800 to get the first floor of the house repainted."
Phyllis said the paint used on the home was a "flat paint" and wasn't conducive for the kitchen.
"Any sort of steam from cooking completely messed up the wall," Phyllis Smolens said.
The family said problems arose all around the house.
"We had problems with the balcony, the toilet, cracks in the stone outside, the floor had scratches like from a small dog and small black marks that look like you took a black Sharpie," Greg Smolens said.
During the interview with KOMU 8, a cabinet full of dishes almost fell off the wall. The family raised many questions about the home and its cosmetic issues.
"Why are there cosmetic issues, if the home is brand new," Greg Smolens questioned.
Target 8 pulled water bill records from the home before the Smolens moved in. Water usage jumped from Dec. through March on average of $80.90.
Neighbors of the property said they've seen multiple cars pull into and out of the drive way for three months at about that time.
One neighbor, who also bought a Wilcoxson Custom Home, said the problems the Smolens family are experiencing, hit close to home.
“After they sold us the house, they didn't want to honor their product," the neighbor said.
Billy Dexheimer, a real estate agent in Columbia, said generally speaking, some sellers don't disclose everything. Although most of the time, there is a disclosure agreement.
“In Missouri, there’s not that many things for the state to require you to disclose," Dexheimer said.
According to Missouri Statute 402.606, the seller only has to disclose if there was ever methamphetamine production on the property. Dexheimer said the seller doesn't have to disclose if there was someone living there.
“It's hard to say buyer beware but it's very true, because buying a home is not only a massive investment for a family," Dexheimer said. "It's where they spend their time, it's where they raise their kids, it's where they have Thanksgiving, and you want to make sure that that place that they live in and is such a part of their lives is something that they are comfortable with once they get that key closing."
Dexheimer said if you're moving in or around Missouri, there are some steps to take.
"A lot of times we always say buyer beware because the buyers need to be really diligent when they are purchasing a home," Dexheimer said. "They need to have their inspections done, and they need to check the title, and the neighborhood. There's all kinds of things, which it's nice to have a real estate agent buy your side."
KOMU 8 reached out to Darrin Wilcoxson, the owner of Wilcoxson Custom Homes. He agreed to an interview but then called to cancel the next day.
“I’m going to decline this interview," Wilcoxson said. "That gives you a story, and I’m just going to decline it.”
KOMU 8 reached out to Wilcoxson again and he sent a statement.
"The concerns of Mr. and Mrs. Smolens relate almost wholly to cosmetic items which should have been objected to by them prior to and at the final walk-through, instead of waiting until after closing," Wilcoxson said in the statement. "Wilcoxson has explained its position and the terms of its Limited Warranty to Mr. and Mrs. Smolens repeatedly. Because Mr. and Mrs. Smolens continue to make unfounded allegations, Wilcoxson, through counsel, recently sent a formal response to Mr. and Mrs. Smolens again explaining such matters and denying their allegations. In conclusion, Wilcoxson complied with its Limited Warranty in all respects, and Mr. and Mrs. Smolens have a very nice home which is well worth the purchase price."
The Smolens said they have a serious case of buyers remorse after learning about buyer beware.
“I’m tired," Phyllis Smolens said. "I’m tired of pushing, I’m tired of calling. I wish someone from the state or the city would want to make changes not for us but for the people. Let's make this right.”
Phyllis Smolens said if they would have known about Missouri law, or the absence of it, the family would have been more aggressive in the search.
"We would have nit-picked and been more critical," Smolens said. "We just didn't have a lot of time."
Greg Smolens said the family would have made sure their original realtor was present during the final walk-through.