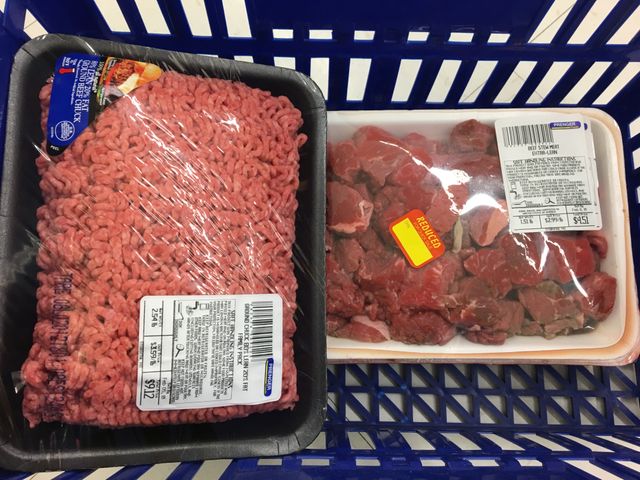 COLUMBIA - "Stinking rotten discolored meat" prompted a customer of Prenger Foods to contact KOMU 8 News and ask for an investigation.

The email said meat at several locations of the grocery chain had "outdated stickers" on the packages "as many as 3 stickers" piled on top of each other.

KOMU 8 News looked into seven out of the nine Prenger Foods stores throughout north mid-Missouri. The Target 8 team found the problems centered on how the meat was handled and labeled.

The investigation started at the Prenger Food store in Hallsville. On Feb. 1, KOMU 8 News went to the store and bought a package of chicken drumsticks that had three price date labels stacked on top of each other, each layer concealed by the next. The uppermost sticker had a sell by date of February 8, 2018. The two labels under that showed sell by date Aug. 1, 2017.

A store manager said he did not know how that happened.

"It is weird. See, this comes in from our warehouse. We just got these in this week,” he said. "If you want, I can just refund your money, and I will send this back to the warehouse. I am not sure why that is like that. Cause, like I said, we just got those in on Tuesday.”

KOMU 8 News contacted the chain and talked to Amanda Prenger, daughter of one of the owners. She scheduled a meeting with Prenger's meat manager Eric Richardson.

He said the labels on raw chicken drumsticks are placed by the stores and not by distributors.

According to USDA regulations, a raw meat or poultry package label should include the name of the product, what the product is composed of, the retailer or company name, weight, price and safe handling instructions.

The same USDA regulations also specify how the label should be placed on a meat package:

"Any word, statement, or other information required by this part to appear on the label must be prominently placed thereon with such conspicuousness and in such terms as to render it likely to be read and understood by the ordinary individual under customary conditions or purchase and use.

The stacking of the labels on the Prenger's chicken drumsticks didn't make the original sell by date clear.

The same practice of stacking labels was found at Prenger's Sturgeon location.

At the Huntsville store, more than one label was applied to meat products, but the labels were positioned in such a manner that allowed the customer to view both sell by dates, weights and prices, making it clear the label on that product was changed. USDA code requires that any date changes be made obvious; "that the change in the date is identified on the label, e.g., 'original sell-by date' and 'new sell-by date'."

The Food Safety Inspection Service (FSIS) code states that the "principal display panel," which is the label that contains the product's weight and price, "shall be the part of a label that is most likely to be displayed, presented, shown or examined under customary conditions of display for sale."

In the case of red meats, other labels such as "reduced price," "reduced for fast consumption," "keep frozen" and "previously frozen" can be used in raw meat packages for clarity purposes. But, the FSIS has specific regulations for poultry.

Jeffery Canavan, USDA deputy director of labeling and program delivery staff, said,  "If a product is labeled as fresh, and it was subsequently frozen, the reference to fresh would need to be removed from that label."

Otherwise it's misleading, he said.

"I believe in that type of situation, FSIS should recommend that there be a statement on there to let consumers know: previously frozen, keep refrigerated or refreeze for your protection,” Canavan said.

Under USDA and FSIS regulations, retailers are allowed to extend the sell by date of raw meat if it is still deemed safe for consumption.

Sell by dates on raw meat and poultry packages are used for quality control.

Even though there are not specific regulations explaining how much retailers can extend food sell by dates, Canavan said the retailer should have a clear reason.

"We don't support randomly changing the dates unless there is a reason behind it," Canavan said.

Sell by dates on raw meat packages are not required by federal law, and according to a University of Missouri Meat Science Professor, Bryon Wiegand, placing a sell by date is a courtesy done by the retailer.

"On packages you see a sell by date, those are largely for inventory control for the retailer. So, that is not necessarily an expiration date," Wiegand said. "In fact, it's not a expiration date."

"If we are on day four of a product, and we reduce it for sale at the end of day four, somebody may say, at the end of day five, 'If we don't sell that we might freeze it and sell it as a frozen product, or we may just throw that product away.' And that is restrictively the retailer’s prerogative,” he said.

But again, if there is a date listed and then changed, code states that change should be clear to the consumer.

In 2016, the USDA revised its guidance on raw meat and poultry date labeling in order to reduce food waste.

“From a FSIS position, you know, if a date is applied and than a second date is later applied, extending it, we would expect that they do something to it; further process it, or maybe is refrigerated," Canavan said. "That would be a situation that you could change the date.”

According to the USDA, each meat or poultry cut has a different storage time limit in order to keep refrigerated food safe for consumption.

How did Target 8 buy a 6-month-old chicken?

Canavan and Wiegand said it's likely the chicken was previously frozen.

"That sounds consistent with a product that has been frozen and thawed," Canavan said. "The freezing process and the subsequent thawing will, you know, there is not a safety concern there, but it will affect the quality over time because the ice crystals will penetrate the cells."

"I don’t necessarily know why a retailer would do that and not sell it as a frozen product,” he said.

The chicken drumsticks bought at the Prenger Food in Hallsvillle didn't have any label that said it had previously been frozen.

Wiegand said, "That would be a little curious. That’s how it went through the store. So, I don't know what their particular protocol would be, but typically, if it was put in the freezer, on the original sell by date, would stay in the freezer and be sold as a frozen product."

Target 8 made several attempts to talk to the owners of Prenger Foods, but got no response.

Columbia residents continue to drop off their recycling at centers as bins overflow
COLUMBIA — It's been almost one month since Columbia residents were told their recycling would no longer be picked up... More >>
17 hours ago Wednesday, August 05 2020 Aug 5, 2020 Wednesday, August 05, 2020 6:36:00 PM CDT August 05, 2020 in News
Share:
Email
Facebook
Twitter