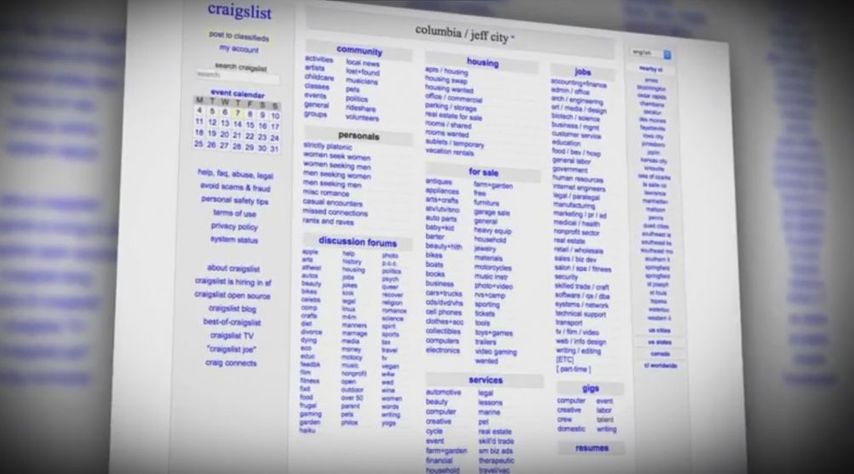 COLUMBIA - Jollene Kuo Hastings wanted to be a model since she was 17 years old, but remembers early in her career not every attempt to enter the industry felt safe.

"I remember looking at Craigslist for different freelance gigs," she said.

Until Hastings realized these ads weren't exactly what she had in mind.

"It said you had to come alone, like you had to be at least 18 and could not be accompanied by anybody because they didn't want to 'crowd the space'," she said.

"Well it turned out the space was at this man's house, he was not the photographer, he had no modeling background, no connections to an agency, he actually just wanted it for his personal use."

Hastings said he offered her $1,000 for an hour-long shoot.

"I was nervous," she said. "I remember him distinctly making sexual references that made me feel uncomfortable."

The Target 8 Team investigated a series of provocative Craigslist ads, like the one Kuo Hastings came across, targeting young women in Columbia.

A KOMU 8 News reporter changed her identity to look into one of the ads and found the trend to be very similar.

Law enforcement said that a number of the ads, like the ones shown above, are "red flags".

"If you are a reputable brand, you wouldn't just post, 'amateur females wanted, and we're going to pay you over a grand,'" said Hastings. "They're making a mockery out of the modeling industry."

Craigslist is used by more than 60 million people in the U.S. each month. The site is most notably used for selling furniture or housing, but the site also has sections that seem to be selling something else.

The advertisements followed a similar trend, all indicating they are looking for female models in Columbia that must be: "cute, in great shape, toned, and 'must send pics'."

"From what I've seen, the ads are very enticing. They make you feel like you're going to be somebody," said Det. Tracy Perkins, Boone County Sheriff Department's Cyber Crimes Unit.

Perkins said it's important to realize that although many ads may say they're located in Columbia, they're usually not.

SSA John indicated the first red flag is the amount of money that is offered in many of the ads.

I asked Perkins, "What can you possibly be doing for that amount of money?" and she agreed it's often used as a form of enticement.

"What happens is they get dollar signs, easy dollar signs thinking 'I can model'," said Perkins. "The main indicators tell me, it could potentially be human trafficking, or potentially prostitution."

KOMU 8 News reached out to one of the email accounts under a fake name to see what the "modeling" consisted of.

The email account responded by saying they wanted full body photos: "So I do know what you're working with." The email subsequently admitted the possibility of nude photo and video shoots and offered to pay for all traveling expenses to New York City for the shoot.

"When you're talking to people on the Internet, it's not just somebody right here in Columbia. They may say they're from Columbia, but they're usually overseas," said Perkins.

KOMU 8 News was curious if this company would offer options locally, so we asked if the shoots could take place here in Columbia like the ads indicated. They responded by saying "We can work with you here. You would be met at a studio and use whatever props or makeup we have on hand."

Perkins said when cyber criminals change the course of the conversation, it's their attempt to make you feel comfortable to say anything you want to hear. This type of behavior is what's often referred as "grooming."

"Red flags" for other cyber crimes

The Cyber Crime Unit pointed out these crimes don't just start with email threads; even Skype can be a way to be lured in.

"What people don't realize is they can screen capture whatever they ask you to do, and once they convince you and you feel comfortable, you're basically done," Perkins said.

Other cases could be financial scams where the conversation leads to the requirement of paying for something up front, which could be followed by a fraudulent reimbursement check. Respondents could also risk having their identity stolen.

"What we typically see, is they subsequently sell it to others, so that information continues to be replicated out there," said SSA John.

Perkins said they could also be using it as a way to set up additional accounts to pretend to be you.

Perkins said even though this activity happens everywhere, she said it's underreported in Boone County, and that's a problem.

"Modeling is a tough industry," said Kuo Hastings. "A lot of time people want to take short cuts, so if it seems to good to be true it usually is."

KOMU 8 News reached out to the recipient of the email account used in our investigation and Craigslist, Inc. for a comment and received no response.