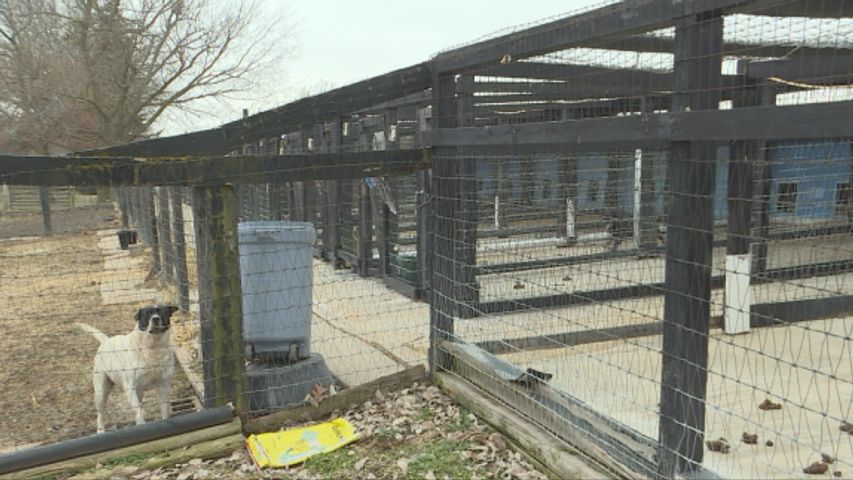 This KOMU 8 Target 8 investigation focused on the experiences of those who have volunteered or tried to adopt from Callaway Hills.

Sandy Hempe decided to volunteer at Callaway Hills after her dog passed away.

"I just needed something to do with dogs," Hempe said. "I had heard about them, the area's only no-kill shelter at the time. I couldn't volunteer with a shelter that put dogs down."

Hempe said she did a little bit of everything at the shelter. After volunteering for nine years, she said it eventually became her life.

After a while, she said she started noticing red flags.

Hempe became concerned the animals were getting no enrichment. She said the dogs were getting kennel crazy and unadoptable, so she brought up her concerns to the manager at the time.

She said she was told to never come back.

"I said some things that I felt needed to be said," Hempe said. "The animals were getting more and more unadoptable because they weren't getting any attention, no enrichment, no grooming. That basically it was just becoming a place to warehouse dogs and that they needed to let them go."

KOMU previously spoke to owner, Lenore "Tony" Weldon, after a protest happened outside her shelter. Protestors claimed the animals were not taken care of properly during the winter's frigid weather, but Weldon said they did the best they could.

"We took care of it by extra straw, there are tarps, the main thing was the wind chill that was so damaging but we can honestly say no dogs suffered here, and we had no problems," Weldon said.

As for conditions, Weldon said the shelter works to always be up to standard.

"We know the regulations, and we pretty much have a good handle on them," Weldon said. "We try to comply with them, and when we're not in compliance, we get in compliance."

However, public complaints to the Department of Agriculture prompted investigations. Those investigations lead to more frequent, unannounced visits.

Some details from complaints to the department include:

"Animals are not provided proper pest preventatives, the owners almost refuse to adopt these poor pets out and keep them in horrible conditions. It seems to be almost a hoarding situation... THE ANIMALS NEED HELP!!!!!!"

"I went there to look at the facility. It reeked of feces. No bedding seen in any kennel... Some of the dogs showed fear and frustration of humans... I had NO IDEA how horrible they were living."

"I could see fleas crawling on all the cats. When I asked about flea treatment, I was told that several of the cats were semi-feral so since they couldn't treat them all it was a waste of time to treat any of them."

"Chewed wood, sharp/jagged metal on the enclosures, green moss/mold growing on the wood, very large food bowls heaping with food... dogs on nothing but gravel in 90+ degree heat."

In the investigations that followed these complaints, some claims were substantiated like chewed surfaces not adequately cleaned, growth in water bowls, rodent droppings in food storage areas, lack of an effective flea program and in June of 2017, there was no veterinary care program available to review.

The Department of Agriculture checks on the substantiated claims with inspections. Most recently, the inspection listed 34 adult cats and 56 adult dogs at Callaway Hills. Main problems the shelter continuously faces is having improper identification cards attached to enclosures and not having animals up to date on vaccinations.

"The yards where the dogs are housed now were meant to be exercise yards for dogs that were in kennels to be turned out during the day, but we ran out of housing and dogs are constantly dumped on us."

However, many people think this issue is also because the shelter rarely adopts out its animals.

"There were so many problems with them letting people adopt out animals," Hempe said. "We'd have these applications of people with good vet references, nice people wanting to give an animal a good home, and they'd be turned down over and over and over again."

She said it was an automatic no if the person did not have a fenced in yard or if they had never owned a pet before.

One person who was turned away is Arin Vanloo. Vanloo has been a groomer for 21 years and has eight dogs of her own, while fostering others.

She tried to adopt a dog named Payton in 2017, but Payton is still at Callaway Hills.

Weldon said many people take it personally when they're turned away, but she said they shouldn't.

"Often, it’s just their living circumstances is not appropriate for a dog we know is likely to bolt out the door," Weldon said. "We’re just trying to do the best for the dogs, and the thing we don't want is to adopt a dog out and then they have to get rid of it."

Reiber took her dog to Callaway Hills while going through a divorce. She thought he could do better in a different home, but she almost immediately regretted it.

"I went back there and I begged them to let me have him back, and they wouldn't, they said I had to fill out another application and wait," Reiber said. "So I filled out an application and I waited and they never called me so I kept calling them. They never returned my calls, they refused to talk to me."

She said after waiting too long, she went to the shelter on Christmas Eve 2017. She said it was cold, he was shivering and his gate was unlocked.

"I took him. And I took him home. And well they called the police and I was arrested, and they took Jack away from me and it ripped my soul out because I let him down. I gave him hope that he was going to have a life," Reiber said.

After not seeing Jack for more than a year, she decided to go back to Callaway Hills. Staff would not let her see him because the shelter is now open by appointment only, but she went to his cage and petted him anyway.

Staff asked Reiber to leave and wouldn't let her make an appointment to see him.

"I just want him to come home. He looks terrible," Reiber said.

Vanloo said she hopes the animals can get out of their cages and get into homes as soon as possible.

Hempe, Vanloo and Reiber said they don't want the shelter shut down; they just want more action to be taken to give the animals good homes and living conditions.

"They can feed them and maybe give them a pat on the head daily but that’s not a life," Vanloo said. "Just because they are a no kill shelter doesn’t mean that it should be no life."