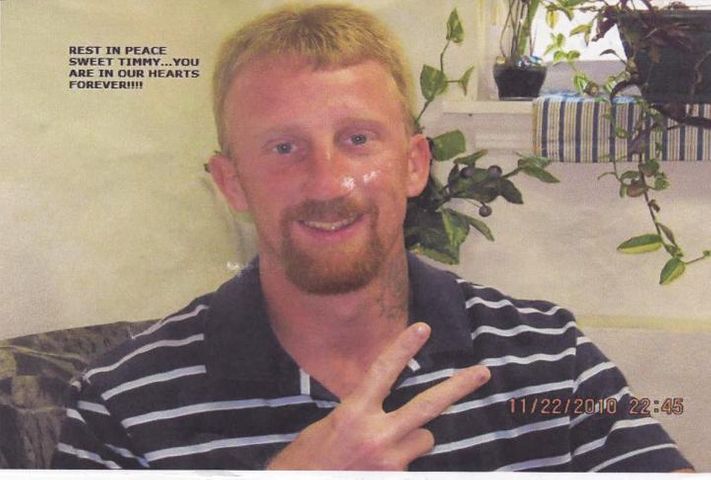 The death shot came to the head. Extensive damage to the brain, the autopsy reads. His life ended on April 2, 2012, in the doorway of his cousin's trailer. He was 34.

Some of the shots that missed Simpson traveled through dry wall and pelted Jason Hazlett's neighboring trailer in the Green Meadows Trailer Park, located right on the edge of the city lines of Fulton, Mo. The bullets hit Hazlett's refrigerator and left visible holes in his bedroom, just inches above the bed where he normally sleeps.

Investigators found one other thing at the scene: a .380 caliber pistol belonging to Simpson. He'd been firing it randomly in the neighborhood early that morning, prompting 9-1-1 calls from neighbors and a response from law enforcement. One caller told the operator there was a man pacing around the park saying he was "gonna have a shootout with the cops."

When officers arrived, reports claim Simpson first pointed the gun at his head before making a movement interpreted as a threat by officers. Even Simpson's cousin, Dustin Hook, admitted to investigators the gun "might have looked like it was pointed at the officers."

Hook said the shooting sounded like a bomb went off. Shortly after Simpson's death, the family tore down the trailer to erase all memory of the incident. They bought a new one, but much to their horror, it only reminds them of the old one.

The medical examiner ruled the death a homicide, simply meaning someone killed another person. Deputy Alan Lebel of the Callaway County Sherriff's Department fired the pistol. Cpl. Troy Stegeman of the Missouri State Highway Patrol fired the M-16 assault rifle. Judging by the video from Stegeman's patrol car, obtained by KOMU 8 News via a public records request, the shots began at 6:17:28 a.m.

And then dead silence.

"Received gunfire," said the stoic voice on the other end. "Shots fired."

They called for the EMS. Timothy Simpson was pronounced dead at the scene.

"When a law enforcement officer is facing the business end of a handgun," Wilson said, "their job is to protect themselves."

The world will never know exactly what happened in that trailer park. The Highway Patrol's video captures the sounds of the shooting, but the activity happened yards away from the view of the camera.

According to reports, highway patrolman Stegeman responded to a Troop F radio call around 6 a.m. Somebody had been shooting a gun in the air at the Green Meadows Trailer Park, so he met Lebel at the corner of Route F and West 7th Street, just a few blocks from the area. Family members would later tell investigators that Timmy Simpson had been "acting crazy" and may have been upset about a girlfriend.

"Paranoid," Michael Simpson told investigators. "That's the word I'd use."

Local authorities knew Simpson. He'd been in and out of jail for the past decade, convicted on drug charges, theft and assault. His family said he had a history of mental illness.

It was pitch black when Lebel and Stegeman encountered Simpson standing in the doorway of his trailer. From the lawn, they drew their weapons and demanded he drop his gun. Instead, he put it to his own head, threatening to kill himself.

The next move is under dispute.

The Callaway County Sheriff's Department and Missouri State Highway Patrol declined to comment for this story, but the investigative documents contain interviews with both officers. Stegeman told investigators that Simpson "appeared to be taunting him" and made a "forward motion" with his pistol. He also said Simpson had waved the gun at him when they first arrived on the scene, even though Lebel said in his interview that Simpson originally had the gun pointed at the ground. The encounter occurred after Stegeman had been informed of the 9-1-1 calls and Simpson's threats to start a shootout.

"I didn't second guess anything," Stegeman told investigators. "My anxiety spiked at that point. I was like, this doesn't sound good whatsoever. It's not just someone going out happy shooting, he's yelling, ‘call the cops, bring ‘em on out here and let's have a shootout.'"

When the situation turned heated and all guns became drawn, Lebel said Simpson "continued to disobey my orders to put the gun down."

"Simpson started to bring the muzzle of the gun down pointed towards Trooper Stegeman and I. I fired my duty weapon three to four times at Simpson aiming at his center mass," Lebel said. "I stopped firing when Simpson fell to the ground inside the trailer and was no longer a threat."

Chapter 563.046 of Missouri's Revised Statutes authorizes law enforcement to use deadly force when the subject "may otherwise endanger life or inflict serious physical injury unless arrested without delay."

However, the law makes no specifications as to how many times the officers can fire or where they can aim on a subject's body.

"The law's not written in a vacuum," Wilson said. "You read the law, and then you compare the law to what you know to be true."

After Wilson declined to prosecute the case, the joint investigative report from the Missouri State Highway Patrol and Callaway County Sheriff's Department became open record for KOMU 8 News to request. The search warrant shows five shots from Lebel's pistol, listed as .40 federal casings (other documents in the report list four casings). The 15 from Stegeman's assault rifle were listed as .223 caliber shell casings.

It is unclear whether Simpson himself fired a shot. A .380 shell casing was found at the scene from his gun, but it could have been a leftover from the shots he fired in the air in the middle of the night. Stegeman said he found a box of .380 ammo after examining Simpson's dead body.

"They didn't really have to shoot that many rounds off," said Chasity Hook, Dustin's brother and Timothy's other cousin. "They could have shot one time or something."

Hook saw the shooting from her trailer next door. Her mother, Rose Simpson, lives down the street and rushed to the scene when her daughter called her that morning. In the immediate aftermath of her nephew's death, she released her raw emotions in an interview with KOMU 8 News.

More than a year later, her sentiment hasn't changed.

"Way too many times," Simpson said. "[They] use a military rifle so you might as well put him in the line of fire and shoot him like a dog, because that's what they did."

The sheer amount of shots may seem stunning to the untrained eye, especially the 15 fired from Stegeman's assault rifle.

But it's not surprising to David Klinger, a criminal justice expert at the University of Missouri-St. Louis and former street cop.

"For an officer to fire 15 rounds in a shooting, with an individual who is armed with a gun, is not unusual," Klinger said. "In fact, I've interviewed multiple officers who've fired more rounds than that."

Michael Lyman, a Columbia College expert on use of force and former DEA agent, listened to the video of the gunshots from the Highway Patrol and reached the same conclusion.

"I don't know that that's an unreasonable number of shots to be fired," Lyman said, just seconds after hearing the shooting on tape. "It's hard to say what a proper number of rounds would be because it depends on the actions of the subject at the time."

"Officers are trained to shoot to stop," Lyman said. "Not shoot to kill."

Except Timothy Simpson died from a gunshot wound to the head.

Due to the potential for civil litigation from the Simpson family, Wilson declined to comment specifically on this case. However, he agreed to speak with KOMU 8 News to discuss general topics regarding officer-involved shootings and how he reaches decisions on whether to prosecute.

That's why Wilson paused for several seconds to answer one particular question.

Do you really not consider where the subject was shot?

After the prolonged silence, he finally responds.

"What police are trained across the country is to shoot to center mass," Klinger said. "But if you continue to shoot into those areas and the suspect is still there, then officers are then trained to go to the headshot."

According to the autopsy, the bullet Simpson took to the skull caused multiple fractures and essentially destroyed the tissue on the entire right side of his brain. The fragments found were "consistent with a high velocity round."

"It's a very unfortunate situation that somebody had to lose their life over this," Lyman said. "But if the officers did everything that they could do leading up to the shooting, many of these situations have no other reasonable outcome than the shooting of the subject."

Even if the dangerous situation caused the officers to shoot Simpson - and shoot him in the head - there is also the question as to what happened to the other shots.

If the autopsy shows that four shots hit Simpson, it means at least a dozen other shots missed him and flew somewhere else. Many of those bullets landed in Jason Hazlett's trailer, located just north of the scene.

That morning, he pointed out several holes in his refrigerator, and his home still has visible damage to this day. Bullets tore open the front of his trailer, hit the side of his window, traveled through that wall and then through Hazlett's bedroom, where bullets struck above his bed.

Hazlett was sleeping in the other room that morning.

"I sleep on my hip," Hazlett said, demonstrating his normal sleeping position on his bed. "It would have probably got me."

The shots then went through the back of the trailer and toward the rest of the park. According to 911 calls, several children were awake in the trailer park in preparation for the school day.

Diagrams show the officers were likely not that far away from their subject during the standoff.

It was still dark at 6:17 in the morning, but they told investigators they had shined a bright flashlight on Simpson to see their target.

"It could be other things and other factors. Maybe their ability to see the person. Maybe the person was moving," Lyman said. "It's really hard to say. It's difficult for any of us after the fact to armchair quarterback the thing and pass any judgments."

That raises another question: the appropriateness of an assault rifle in a residential neighborhood with children.

"What if it had hit someone else's kid," Rose Simpson said.

But Lyman said it is not uncommon for law enforcement agencies to give assault rifles to their officers.

"With regard to the trailers located behind, that's another difficult circumstance," Lyman said. "But you can't expect reasonably for the officers not to respond if they are facing that threat of serious physical injury or death."

Timothy Simpson's toxicology report from the autopsy showed a positive test for methamphetamines at the time of his death. He was a drifter who didn't have a permanent residence. When investigators asked Chasity Hook about her cousin's occupation, she couldn't answer.

When word began to spread among Simpson's family that he might have been shot, his father called 9-1-1 to demand information. Kenny Simpson told the operator "a war is coming on" if his son was dead.

That war has come in the form of litigation. Simpson's family hired an attorney shortly after the incident.

"I just think it's wrong," Rose Simpson said. "It doesn't give you the right to be the judge, jury and executioner."