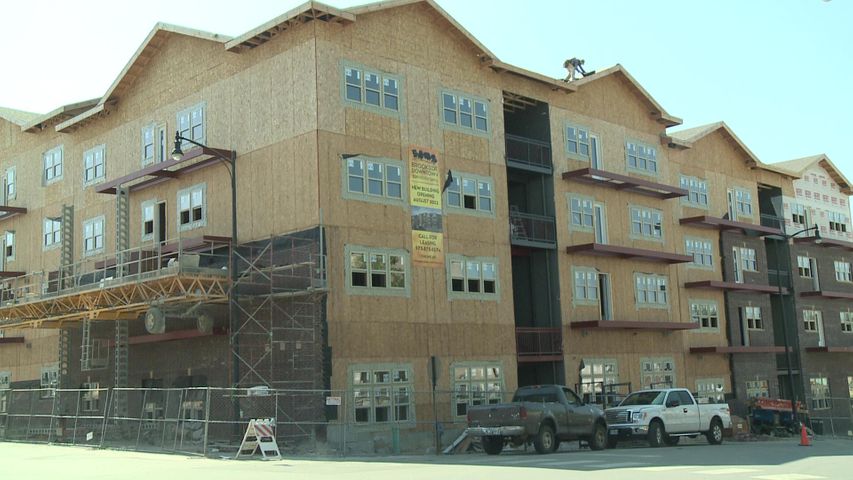 COLUMBIA - The downtown student housing boom doesn’t appear to be slowing down anytime soon. The continuous development has sparked strong opinions on both sides and the debate has only grown louder with each additional building.

Brian Treece, a member of the Columbia Historic Preservation Committee and a mayoral candidate, has been very vocal in opposition of the recent developments.

“The city council never anticipated that we would be tearing down entire blocks of downtown in order to build only residential uses with no parking requirements,” Treece said.

Target 8 looked into the developments to find out how the city got to this point, and what's next for downtown Columbia. Part of the question considered is the rights of property developer to build as they see fit versus city planning for overall growth and aesthetics.

Since 2010, developers have built five luxury student housing complexes downtown. Three more are on the way and, currently, there’s nothing keeping developers from building more.

“It’s a real problem. Small businesses are family businesses… you’re not buying me a vacation home, you’re just making sure I can pay my electric bill this month,” Allen said.

But after looking back through Columbia’s zoning laws, Target 8 found the city doesn’t have as much power as one might think.

In 1988, the Columbia City Council passed ordinance B-358-88, lifting almost all residential zoning restrictions in Columbia’s central business district, now known as C-2. This covers all of downtown, as well as a few neighborhoods north of town.

Target 8 looked back at the minutes from the November 10, 1988 meeting, which is when it passed. Columbia's city council at the time expressed a desire to attract young professionals to existing downtown buildings. In order to make that happen, the council lifted nearly all zoning restrictions in C-2. Below is an excerpt from that meeting:

"...Changing the phrase allows dwellings in C-2 as an allowed us with no restrictions on density, setback, building height or parking."

The council officially passed the amendment on November 21, 1988.

Treece said, prior to 1988, developers had to follow multiple regulations and prove they could provide adequate parking, rich architecture and capacity for any changes that would affect infrastructure.

The changes were initially created, in part, to bring more money to downtown stores. But Ward 3 Councilman Karl Skala said the ordinance created a loophole that, in 2010, developers started taking advantage of.

At the current city council’s February 15, 2016 meeting, the council reviewed a California-based developer's request to turn two plots of land, where Quinton’s Bar and Deli is currently located, into a single plot to make way for a building mainly to be used for student housing. The proposal passed by a vote of 6-1.

During that meeting, Mayor Bob McDavid asked a question to the city’s legal counsel regarding potential consequences that might be faced by representatives who voted down the plat.

The city's legal counsel replied there was “potential liability” on the part of the city, and that specific council members could be sued.

Once a platting measure is passed, the only way the council will have any control over a development is if the developer does one of the following:

In short, the city council cannot deny a building proposition unless the developer does not follow the law.

Skala was the only representative to vote against the platting measure. He said that night, "I risk a private lawsuit… but, just so I can go to sleep tonight, I’m going to vote no.”

While the council cannot outright deny such proposals, it can delay them. The council has a 45-day window from the date of the proposal to vote on it, and if members cannot decide within that time frame it is automatically passed.

Skala said the council sometimes does not have plans to meet before the end of such a window, which forces the council to make a decision on short notice.

Treece said, when the city council passed ordinance B-358-88 nearly 30 years ago, it didn't have high-density housing in mind.

“The concept was these would be young professionals, and when they went to work in the morning, that would free up parking spots for shoppers to come in and shop. When they’d go home, people would get off work, and they would come back to a parking spot," Treece said.

Treece said the ordinance was created to help small businesses, not hurt them.

In the past nine months, five businesses have either closed or relocated in order to make way for new luxury student-apartment developments:

Aziz El-Tayash, the owner of Casablanca Mediterranean Grill, said, while he was forced to close, he understands that it’s a part of business.

“It’s sad, but we were treated fairly,” El-Tayash said.

Skala said he believes the market is saturated, and the demand for the new buildings won’t be what developers expect. He told KOMU 8 News that downtown is reaching a “housing bubble,” and that developers will soon struggle to fill their buildings.

“It’s not necessarily a market that is saturated…the developers will be able to figure out when it’s no longer profitable to build,” Aura said.

Skala said, while this is a “good problem” for a city to have economically, it has gotten out of hand in a number of ways, including its impact on Columbia’s infrastructure.

The recent rapid pace of the downtown developments has sparked debate regarding sewage, electricity and parking issues. In 2014, Columbia’s downtown leadership council passed an interim ordinance for C-2 zoning. Three temporary amendments were put in place:

These changes did not give the city council more authority to block developments. Skala said his greatest concern is the impact of the buildings, and the utilities needed to keep them going, will have on people who don’t live downtown.

“I am for sustainable development. The key word here is sustainable. Development has tremendous benefits, but only if it’s sustainable,” he said.

Stacie Allen agreed, and said it’s unfair the city has to cater to the needs of temporary residents.

“Everybody who lives in these buildings, they’re visiting. They’re here for four years tops, and then they’re gone again. It’s the rest of us that have to live with this as long as we live in this city,” Allen said.

Allen also worries the buildings will fall apart in the near future, citing they were built at a rapid pace.

Skip Walther, a member of Columbia’s Downtown Improvement District (CID) and another mayoral candidate, told KOMU 8 News that, from an infrastructure standpoint, the city is prepared to take on more housing.

“The sewage issues are being addressed right now, the sanitary sewer system is being improved, and we’re bringing electricity in,” Walther said. “Again, building up is going to create problems, but we can solve those problems if we come together as a community.”

“The city has to figure out a way to provide more parking for people who come downtown because our businesses demand that customers have ample parking opportunities,” he said.

The Historic Preservation Commission has 30 days to review and work with contractors in order to save historically-significant objects before demolition. While this provision is written into code, the commission does not have any power to veto projects.

Treece said commissioners have talked to people about the changing look of downtown, and they aren’t happy.

“I think people are frustrated about the vanishing face of Columbia’s historic downtown,” Treece said.

Treece said, from an historic perspective, out-of-town developers are the cause for the most concern.

Walther disagreed that out-of-town developers are taking advantage of Columbia. He said they are actually the minority, and developers, no matter where they come from, are making Columbia stronger economically.

“Regardless of what you think about downtown housing, 90 percent has been built by hometown folks. These long-time residents of Columbia are paying half a million dollars to our public schools, creating good paying jobs…and they have no intention of leaving,” Walther said.

Skala said it’s time for Columbia to look at how other college towns have handled this type of growth. He thinks cooperation between the city and developers could solve a lot of problems.

"We need some serious answers, and we need the cooperation of both the development community and the community in general to sit down and talk about this, not just exploit the downtown area as if it were some sort of an open field that didn't affect anyone else in the surrounding areas. That's not true, we're a community here, and we oughta act like it," Skala said.

Skala said Columbia is, in fact, being taken advantage of by out-of-town development companies, and it’s important people know that.

“There is no doubt in my mind that some of this is exploitation, some of it is exploitation from people out of town. It’s one thing for local folks to understand what the balance is, it’s another thing entirely just to be exploited.”

Walther said out-of-town developers should be allowed to do what they want with their land.

“The idea of restricting people from coming downtown and putting in new businesses that all of us benefit from makes no sense to me,” Walther said.

KOMU 8 News reached out to Eran Fields, the president of Fields Holdings LLC, the California-based development company referenced earlier in the story. He declined to take part in this story, but did talk to KOMU the same day the council voted 6-1 in favor of the platting measure on his property at Quinton's Bar and Deli.

He told us his building was designed in a way to complement the surrounding area as much as possible.

In 2014, the City of Columbia hired Clarion Associates and Ferrell Madden LLC to prepare a comprehensive update of its land development codes. Essentially, it paid Clarion $150,000 to draft a new set of zoning laws.

The reports consist of three modules that can be found on the city’s website:

The zoning overhaul is behind schedule, as Clarion initially expected to be finished by December 2015. Skala said he expects developers to take advantage of that, telling KOMU 8 News the earliest he thinks these new laws could be put into place is July.

Allen said it’s important for people like her to engage city leaders.

“People like me need to talk to their representatives. As taxpayers, we’re the ones feeding the monster,” she said.

When the city council does review Clarion’s report, the meetings will be open to the public for comment.