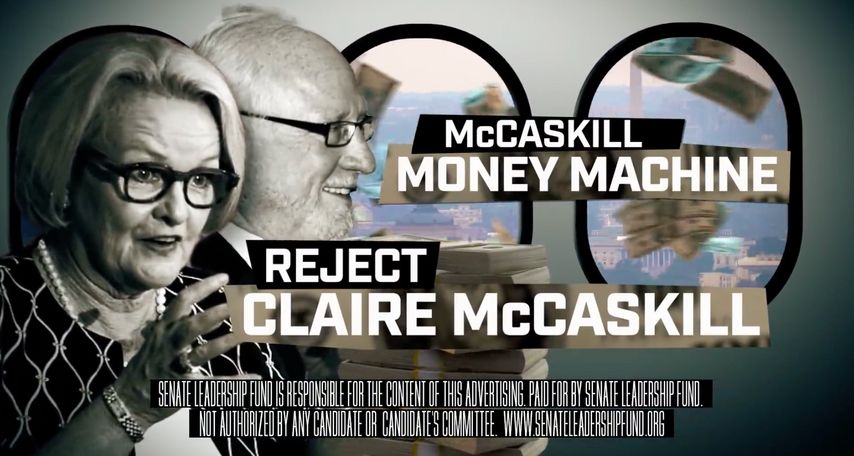 COLUMBIA - A recent attack ad on Sen. Claire McCaskill, D-Missouri, claims the senator has built a money machine over her 12 years in Washington.

The Senate Leadership Fund, a Republican Super PAC aligned with Senate Majority Leader Mitch McConnell, is responsible for the ad.

The PAC pulled its information from multiple articles that appeared in the Kansas City Star and The Washington Free Beacon in June and July. KOMU 8 News found the ad lacks context with each claim.

According to OpenSecrets.org, the Senate Leadership Fund has spent $8 million attacking McCaskill in the 2018 election cycle.

Claim: McCaskill and her husband earn up to $22 million personally.

The Senate Leadership Fund pulled this information from a Washington Free Beacon article. MediaBiasFactCheck.com says the Free Beacon has a right leaning bias.

According to the Kansas City Star, Shepard earns between $300 thousand and $1 million from investments in housing projects that receive federal subsidies.

All together, it is a range between $5 million and $22 million.

The figures are not in question, but the implication McCaskill and Shepard personally earn millions from the subsidies is false.

In the article, it said Shepard has received between $230,000 and $2.1 million from his investment in Matrix Capital Management. It received this information from McCaskill's financial disclosure forms.

The forms show the Matrix Capital Management location is in Waltham, Massachusetts. This U.S.-based fund goes into a "master fund" in the Caymans and that makes the actual investments.

According to the Associated Press, this structure is common and legal for hedge funds.

If Shepard declares his investments on his taxes, he does not receive much of a tax haven. These specific profits would be a matter of capital gains tax in the United States.

Claim: McCaskill pulled her name from a bill targeting these tax havens.

The Senate Leadership Fund received this information from another Washington Free Beacon article.

The bill it refers to is the Stop Tax Haven Abuse Act, which cracks down on offshore investments.

In the article it references congressional records that show McCaskill was one of the five co-sponsors of the bill in 2009. These same records show her name was absent when the legislation was reintroduced in 2011, 2013, 2015 and 2017.

Result: We found this claim to be incomplete.

McCaskill's campaign team said, when a new Congress begins, every bill starts from scratch. Her name not being on the bill does not mean she does not support the legislation.

McCaskill's campaign team said she is still in favor.

KOMU 8 News has fact checked this before.

According to analysis by the Kansas City Star, it shows the companies did receive $131 million during McCaskill's first two terms.

However, Joseph Shepard, McCaskill's husband, does not receive these millions directly. He only receives a share of the products because he is a limited partner in the ownership companies.

The figures are correct, but Shepard does not decide how to use the money.

FactCheck.org, the Associated Press and the Kansas City Star articles show that all of the claims need context.

McCaskill's campaign team responded with its own fact check and said "these attacks are 100% false."

The campaign of McCaskill's opponent, Missouri Attorney General Josh Hawley, said, "Missouri should reject McCaskill for caring more about her lavish lifestyle than she cares about middle class families."