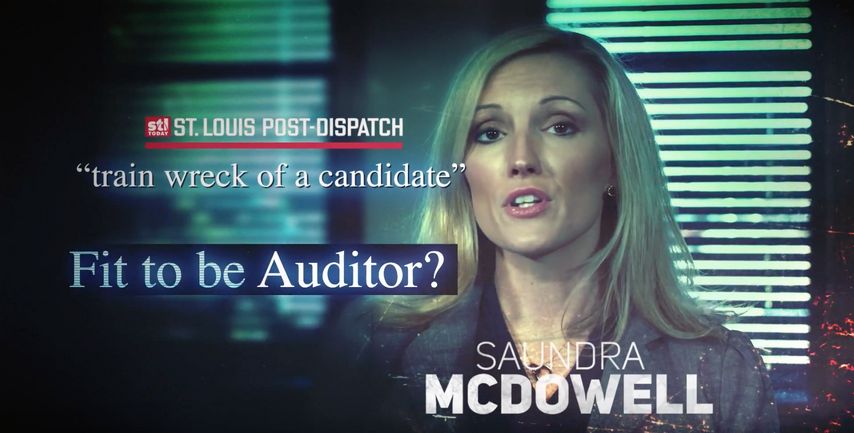 COLUMBIA - A new attack ad paid for by incumbent state auditor, Nicole Galloway, claims her opponent, Saundra McDowell, is unfit to hold the position because of her track record with finances. The Galloway campaign pulled information for the ad from public records detailing several lawsuits against McDowell.

This claim stems from several lawsuits in which McDowell and her husband did not pay for a number of things, ranging from furniture to rent to utilities.

The couple either refused to pay or failed to pay the fees they promised.

KOMU 8 News found McDowell was sued six times in Missouri and once in Kansas.

According to public records obtained on Missouri Case Net, a judge dismissed one of the lawsuits, but found McDowell needed to pay in the six others.

Claim: McDowell was evicted from her home in Springfield.

On December 16, 2014, the McDowells entered into a lease with a landlord in Florida.

They agreed to pay $3,600 a month in rent on a home located at 5118 South Chelsea Avenue in Springfield.

Rent payments were late for May and June of 2015.

On July 8, 2015 the McDowells were evicted from their home.

The final judgement said in part, "...Judgement is entered in favor of Plaintiff and against Defendants for immediate possession of the property described in the Petition: 5118 South Chelsea Avenue, Springfield, Greene County, Missouri, for which execution shall issue."

According to a Google Maps search of the address, the photo of the home in the ad is the same home the McDowells lived in.

Claim: McDowell has so much debt, the state of Missouri is garnishing her wages.

Garnishing wages means the court orders your employer to withold part of your paycheck to send directly to the person you owe.

In the case D&B Legal Services, Inc. vs. McDowell & McDowell LLC, McDowell had to pay Karen Nations more than $1,000 in fees for breaching a contract with Nations's company.

According to Case Net, McDowell's wages were garnished starting in July of 2015. The last garnishment reported in the docket entries was from May 10, 2018.

Result: We find this claim needs context and is misleading.

The editorial does say what the ad quotes, "McDowell, 38, a lawyer and military veteran, can’t seem to balance her household checkbook, much less stand guard over billions of dollars in state expenditures."

KOMU 8 News finds this misleading because the article is an opinion piece not a news article.

Claim: Galloway found over $300 million in government waste resulting in 37 criminal counts during her time as auditor.

According to the Galloway campaign, these numbers are compiled by auditors and executive staff in the auditor's office.

Result: We find these claims to be true.

According to data provided by the State Auditor's office, since her time in office, Galloway has uncovered $345,714,523 in waste, fraud and mismanagement of funds.

Some of the biggest numbers from audits include cases from the city of Joplin, the Missouri Department of Higher Education and the Putnum County Memorial Hospital.

The 2017 State Auditor's report cites 30 criminal counts because of Galloway's audits. Additional data from the State Auditor's office details these counts, including seven more from 2018.

The charges range from stealing to forgery to violations of ethics rules.

KOMU 8 News reached out to both McDowell and Galloway's campaigns.

A spokesperson for McDowell emailed a statement right before air time on Monday. The statement denied the ad's claims and touted a plan that would track every dollar the government spends.

(Editor's Note: This story has been updated to reflect the McDowell campaign's response to the fact check of the ad.)