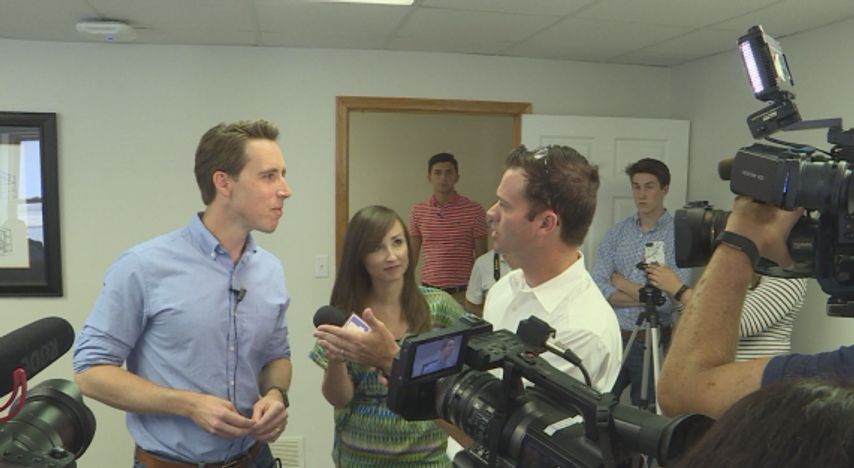 COLUMBIA - A new ad targeting Republican senate candidate Josh Hawley accuses him of trying to take away health insurance coverage for people with pre-existing conditions, and receiving thousands of dollars from the insurance industry.

Who made the ad?

It's called "Faces" and it was created by the Women Vote Project, which is a branch of an organization called Emily's List. It is an advocacy group whose mission can be found all over the website: "We ignite change by getting pro-choice Democratic women elected to office."

Claim: There are 2.5 million Missourians with pre-existing conditions.

Emily's List isn't the only organization using this number. The Missouri Democrats also do. When they tweeted about it, it caught the attention of PolitiFact, which looked into it.

PolitiFact found there are a lot of studies on how many Americans are living with pre-existing conditions and they all provide different numbers. The report the Missouri Democrats and Emily's List are citing has one of the highest estimates. That's because this study includes anyone who might be denied coverage or might get coverage, but be forced to pay higher premiums.

Studies that only include people who would definitely be denied insurance coverage say the number of Missourians with pre-existing conditions is closer to 1.1 million.

Claim: Josh Hawley is ripping away protections for people with pre-existing conditions. He filed a lawsuit to allow insurance companies to deny care.

The lawsuit the ad is referencing is case 4:18-cv-00167-O, filed in the United States District Court in the Northern District of Texas. That lawsuit was filed by 20 states and alleges the tax act of 2017 renders the Affordable Care Act unconstitutional, so the court should immediately kill it.

One of the things that kept the Affordable Care Act in operation was the individual mandate, which forced people to pay a tax penalty for not enrolling for health insurance. The tax act of 2017 removed that penalty. The lawsuit claims, without the penalty, Congress doesn't have the authority to enforce the Affordable Care Act, so it is unconstitutional.

If the Texas lawsuit removes the Affordable Care Act, coverage protections for people with pre-existing conditions will go with it.

Hawley's name is on page 33 of the lawsuit.

Verdict: True. By trying to strike down the Affordable Care Act, Josh Hawley would be allowing insurance companies to deny coverage to people with pre-existing conditions.

Hawley says he wants people with pre-existing conditions to be able to buy coverage, but he thinks that can be done without the Affordable Care Act. At a conference on Wednesday, he denied trying to end protections.

When asked why he was going through with the lawsuit even though he wants to keep those protections, he said the lawsuit was more about getting rid of the Affordable Care Act.

Claim: Josh Hawley is getting thousands of dollars from the insurance industry.

The Women Vote Project sources the Federal Election Commission and the National Institute on Money in Politics for this claim. Both websites allow people to view how much money a campaign or elected official has received and who is donating it.

By using these sites, one can see that Hawley has received $41,500 from people linked to the insurance industry during his time as Missouri Attorney General and another $27,950 for his senate campaign.

The donors on this list rank anywhere from insurance agents all the way up to agency owners, chairmen and executives.

Verdict: True. Hawley is getting thousands from the insurance industry.

It's not clear if he's receiving this money because of the Affordable Care Act lawsuit, but that's not what the ad claims. It merely says he's getting the money.

There's also the matter of political action committees, which don't always state their values or where they get their money from. Any of the PACs that have donated to Hawley could be connected to the insurance industry as well.