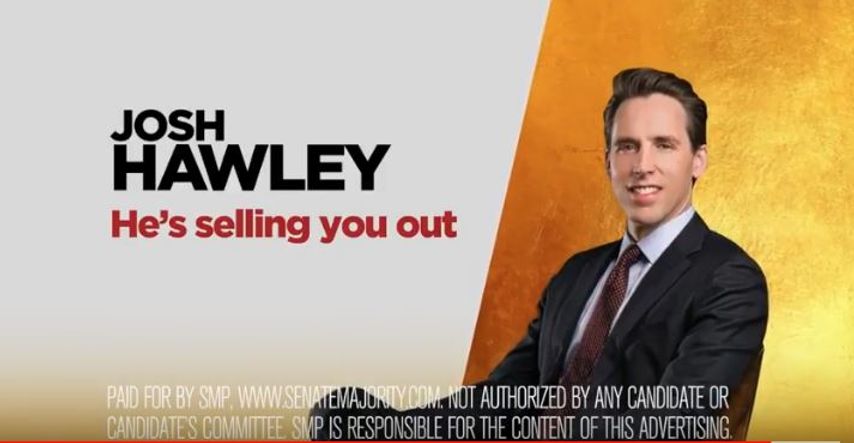 COLUMBIA - These ads accuse Republican Senate Candidate Josh Hawley of ignoring calls for an investigation into a pay-to-play scheme.

WHO MADE THE AD?

The Senate Majority PAC, a political action committee, self described as "experienced, aggressive Democratic strategists with one mission: to win Senate races."

According to the St. Louis Post Dispatch the Jonesburg United Methodist Church in Jasper County bought roof shingles from TAMKO in 2007. By 2013, the church had a leaky roof and blamed TAMKO.

The St. Louis Post Dispatch said a Jasper County man, Lee Hobbs, was having similar problems with the same shingles. Several other homeowners reported the same problems, too.

The Jonesburg Church and Hobbs filed a class action lawsuit against TAMKO in April 2014. In the lawsuit, they alleged a violation of the Missouri Merchandising Practicing ACT.

According to an article by the Kansas City Star, the pay-to-play allegations really started to heat up when Senate President Ron Richard filed legislation several times, most recently in December of 2016, that would limit plaintiffs' ability to sue in class action lawsuits under the Missouri Merchandise Act. This legislation would directly affect the suit involving Humphreys, according to the Star.

According to the Missouri Ethics Commission, just six days after the legislation was filed, Humphreys donated $100,000 to Richard. This prompted the pay-to-play allegations.

According to a Kansas City Star article, both Humphreys and Richard have denied the allegations.

According to the Missouri Ethics Commission, from September 2015 to December 2016, Humphreys gave Hawley nearly $2.9 million.

The second ad, "Golden", claims Humphreys and his family gave Hawley $4.5 million, which was 75 percent of individual contributions to Hawley's campaign.

According to the Missouri Ethics Commission, Humphreys, his mother Ethelmae and his sister Sarah Atkins gave Hawley $4.5 million in 2015 and 2016, which did make up approximately 75 percent of individual contributions to Hawley's campaign.

The ad also takes aim at Hawley's response to the pay-to-play allegations saying, "The Golden Boy refused to investigate, he even admitted he never looked at the evidence."

The Kansas City Star article cited by the ad says something different.

Hawley said in the article his office does not have criminal jurisdiction over pay-to-play allegations and it would have to go to a local prosecutor.

According to the Associated Press, "In Missouri, attorneys general have little initial authority to press criminal charges," in play-to-pay allegations.

As far as Hawley never checking the evidence, he claims his office has "received no evidence at all in this case," according to a Kansas City Star article.

But, in the same article, Meira Bernstein, the communications director for the Missouri Democratic Party, claimed, "Hawley ignored bipartisan calls to investigate the situation."

However, the Associated Press reported Campaign for Accountability filed a complaint to a U.S. Attorney in Missouri, but not to Hawley's office.

The Kansas City Star later reported: "Humphreys was cleared of any wrongdoing in the pay-to-play controversy and Humphreys is not and has never been the subject of any federal investigation."

In a letter to the Senate Majority PAC, the creator of the ads, representatives of Humphreys asked the SMP to take down the ads, "The SMP’s “Shingles” and “Golden” ads contain numerous defamatory and demonstrably false statements and implications about Mr. Humphreys."

The ad is not currently in TV circulation, but is still available online.

The letter states claims that Humphreys is involved in pay-to-play schemes, paying off lawmakers and selling faulty roofing shingles are all false.