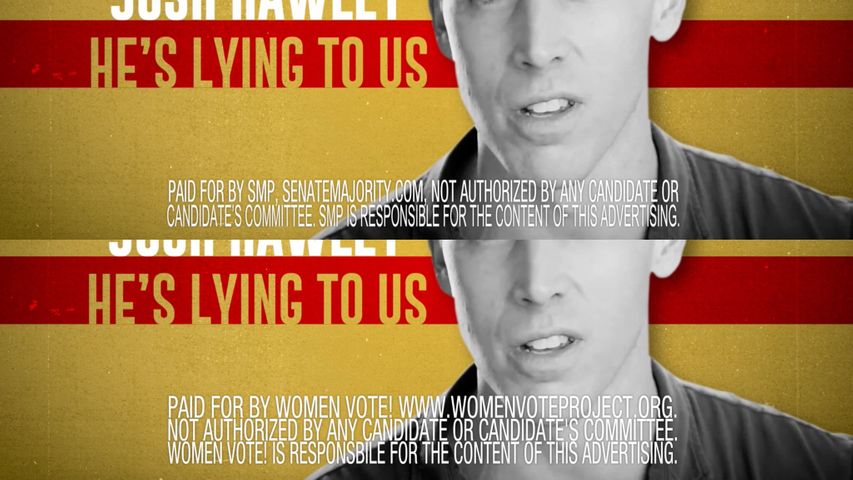 COLUMBIA - A new ad that attacks Republican Senate candidate Josh Hawley is no surprise, but the catch is: who's paying for it.

Slightly different versions are airing, one with a caption saying it's paid for by Senate Majority PAC and the other ending with "Women Vote! is responsible for this ad."

Who are the PACs involved?

KOMU 8 News has already covered other ads from the Senate Majority PAC and Women Vote!. They are both super PACs.

Open Secrets, a non-profit, non-partisan organization, tracks spending in U.S. politics. According to its website, neither Senate Majority PAC, nor Women Vote! are listed as donating to each other at this time, based on the Federal Election Commission's most recent September 24 data. They do however, have some cross over in donors.

Claim: Josh Hawley is "lying to our faces."

This ad is trying to reinforce a previous claim, made by both groups: Josh Hawley filed a lawsuit that removes protections for people with pre-existing conditions.

In KOMU 8's previous reporting, we've ruled this claim to be true. Hawley is involved with a 20-state effort to repeal the Affordable Care Act. But, in this ad, it's important to look at why those states brought the case to court.

Hawley's involvement in the lawsuit follows a string of rulings starting six years ago.

In 2012, the United States Supreme Court ruled Congress has the power to impose a fine or a tax penalty for not enrolling for health insurance. That decision upheld the constitutionality of the individual mandate.

Last year, in 2017, the Tax Act removed the penalty. Now, Hawley, along with the others backing the lawsuit, say, without the penalty, Congress doesn't have the authority to enforce the Affordable Care Act, so it is unconstitutional.

In regards to this ad, we can't confirm Hawley is lying about his position. But ultimately, Hawley fighting the Affordable Care Act's individual mandate based on constitutionality, could cause everything else, including pre-existing conditions coverage, to crumble with it -- if the lawsuit is successful.

Hawley wrote an op-ed in the Springfield News-Leader describing his plan to continue ensuring coverage for pre-existing conditions.

"There are multiple ways to cover folks with chronic illnesses apart from Obamacare. Here’s one: a Federal Insurance Guarantee," Hawley wrote on October 3.

Beyond the fact check: Why focus on "pre-existing conditions?"

Hawley and his announcement of his support for coverage of pre-existing conditions has become a hot topic in this year's Senate race.

"I have no way to know what Hawley is thinking about this, but the fact is, it would eliminate pre-existing conditions and that’s just a fact," Jerry said.

The fight over health care is deeply rooted, he said.

"Even going back to the 1950s and 60s, there were knock-down debates over whether Medicare should be enacted," Jerry said. "But, today’s issue viewed in the light of history is not that surprising."

Peverill Squire, a political science professor at the University of Missouri, said, nationwide, democrats are hitting their republican competitors with health care topics in federal races.

"The democrats are using pre-existing conditions concerns around the country," he said. "And, certainly, this is one issue that works clearly to the democrat's advantage here in Missouri."

While it may seem like Hawley is getting repeatedly bashed for his pre-existing conditions stance, Squire said he thinks the Democratic Party can probably swing voters to its side with this one issue, but it's not for lack of other things to exploit about Hawley.

"They have enough ammunition to use against him, even though he’s only been in politics for 2 years or so," Squire said.

Where does the Trump administration fit in?

In June, the Justice Department filed a brief in the Texas lawsuit Hawley is a part of, saying it would not try to save the Affordable Care Act if it is shut down in the lawsuit.

Attorney General Jeff Sessions said in a letter to House Speaker Paul Ryan that the decision has "the approval of the President of the United States."

"As you know, the Executive Branch has a longstanding tradition of defending the constitutionality of duly enacted statutes if reasonable arguments can be made in their defense," Sessions said. "[But,] I have concluded that this is a rare case."

Why should people care about pre-existing conditions this election season?

Coverage for vulnerable groups began with the elderly and Medicare, Jerry said.

In 1996, Congress passed the Health Insurance Probability and Accountability Act that required employers with 50 employees or more to provide health insurance coverage for those with pre-existing conditions.

The Affordable Care Act, often derided as Obamacare, extended that premise to include everybody, Jerry said.

"Well, it is a fact that the lawsuit would repeal the prohibition on pre-existing conditions and would put us back in a world that existed before 1996," he said.

"Healthcare continues to dominate as the proportion of ad airings referencing the topic rose from 37 percent in August to 41 percent in September," the group said on its website.

It released its September data on Oct. 4. In the state of Missouri, there were 19,907 ads broadcast in September. Of the near 20,000 ads, 48 percent referenced health care and 22 percent referenced the Affordable Care Act or health reforms specifically.

Jerry said, "Health care is complicated and the way the different pieces come together is hard to for anyone to understand, but there’s a lot at stake."