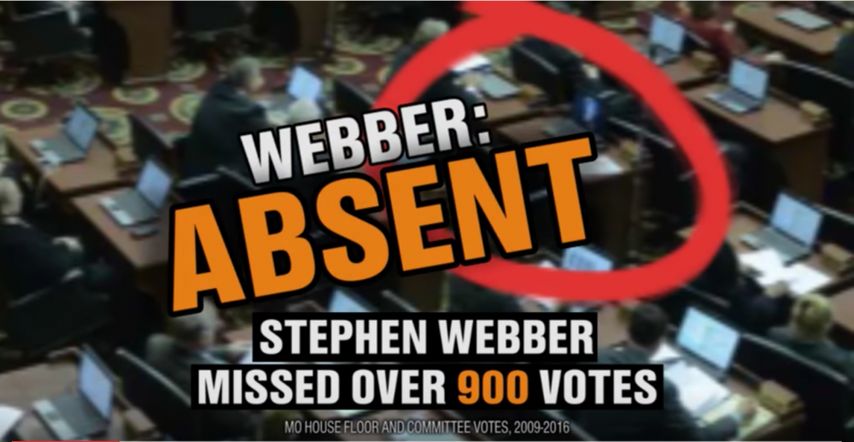 COLUMBIA – Term limits left Boone and Cooper Counties' Senate seat open for the taking, and two local state Representatives are fighting in the most expensive state Senate race Missouri has ever seen.

Caleb Rowden, the Republican candidate, is running against Steven Webber, a Democrat, to fill the 19th district Senate seat in the Missouri General Assembly. Rowden has put out attack ads claiming Steven Webber failed to show up to work as a state Representative.

KOMU 8 News fact checked Rowden’s claims against Webber and determined whether they were: true, false, or incomplete.

KOMU 8 News found this claim to be true. Webber served as a Representative between 2008 to 2016. During that time Webber missed 829 votes on the house floor and 127 votes in multiple committee meetings.

“The first job of a representative or senator is to show up and do the job. I think Steven, for the last 8 years has made intention decision over 900 times that he was gonna do other things," Rowden said in an exclusive interview with KOMU 8 News.

In the ad’s second claim Rowden attacks Webber for the amount of money he received from tax payers.

Claim: “Missouri tax payers have paid Steven Webber over $280,000 salary not to show up:" TRUE

KOMU 8 News found this to also be true. According to the Missouri Accountability Portal, Webber received a total salary of $279,836. Webber was paid an average yearly salary of $35,059 tax payer dollars.

The ad then attacks Steven Webber again for being absent on specific votes as a Representative.

KOMU 8 News found this claim to be true. The advertisement is referring to House Bill (HB) 3, HB 7 and HB 8 from 2013. All three of these bills were appropriation bills, which were used to provide detailed information about the 2013 budget approved by the Missouri House of Representatives. During the final votes of these bills, Webber was recorded as absent and did not vote.

The final attack of the ad claims Webber voted to raise taxes on Missourians.

Claim: “And when he was there, Webber voted to raise taxes on working families and seniors:" INCOMPLETE

KOMU 8 News found this claim to be incomplete. Webber did vote in favor of creating a sales tax in 2013, but it would not have affected the 19th senatorial district. Additionally, he voted against a tax holiday in 2009. Both of these votes would affect all tax payers, not only working families and seniors.

KOMU 8 News reached out to Webber multiple times to allow him to respond to the information that was fact checked. KOMU 8 News never heard from Webber.