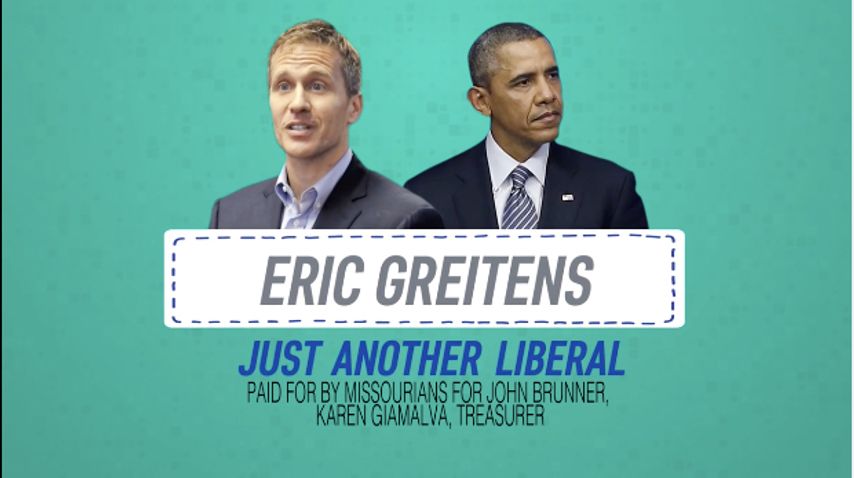 COLUMBIA - KOMU 8's Target 8 investigative team has been fact checking politicans' ad campaigns in preparation for the upcoming primary election on August 2. Target 8 looked into claims made by John Brunner's campaign in his July attack ad on Eric Greitens. Both Brunner and Greitens are running as Republicans in the race for governor of Missouri.

Each statement is designated as true, false, or incomplete based on the facts.

John Brunner's campaign provided the sources referenced for each statement in the attack ad. Eric Greitens' campaign declined to give an interview or comment on an opponent's attack ad, and instead referred Target 8 to Greitens' Fox News editorial titled, "Former Navy SEAL: Why I am no longer a Democrat."

Target 8 asked Brunner directly who the 'pals' in the ad refer to, and he responded, "I'm not really involved in the mechanics of the campaign, I've got an entire team to do that."

According to Mike Hafner, Press Secretary for John Brunner's campaign, the 'pals' in question specifically refer to Hank Monsees, the treasurer for the LG PAC that has aired anti-Brunner ads during this election cycle.

"He was in Eric Greitens' campaign office as an active volunteer and supporter of Eric Greitens in the same time frame, within a few days, of the PAC being formed," Hafner said.

Kansas City's KMBC reported on a video that surfaced of Greitens and Monsees interacting at one of Greitens' campaign events, as well as a photo that appeared to show Monsees making campaign calls in Greitens' office.

Monsees told the Associated Press that he is not involved with Greitens, and Greitens has gone on air stating he does not know Hank Monsees, and his campaign has no association with him. Therefore, Target 8 cannot deem this statement true or false.

For this statement, Brunner's campaign cited its source as a comment made by Time Magazine political columnist Joe Klein when he spoke on MSNBC's talk show 'Morning Joe' in October 2015.

At 2:31 minutes in, Klein commented on Greitens when asked if there are any success stories of war veterans when they return to the United States.

Klein said, "Eric Greitens, who we all know, he’s been on this show, is running for governor of Missouri as a Republican. As a pro-gay rights, pro-immigration Republican."

Klein was on MSNBC's show to promote his book "Charlie Mike: A True Story of Heroes Who Brought Their Mission Home." Greitens is a central character in Klein's book.

Benjamin Hartman, John Brunner's deputy campaign manager, said "Klein is essentially alluding to the fact that he's been assured by Eric Greitens that he's pro-amnesty and pro-gay marriage, and I think it's very telling that Eric Greitens' hasn't denied that."

Target 8 reached out directly to the Greitens' campaign's policy team, asking specifically about Greitens' policy on gay marriage and amnesty for immigrants, and received no response. His website issues page does not clearly indicate a policy stance on gay marriage or immigration.

As Greitens has not released a policy declaring these are his views, this claim is incomplete.

'Or applauding Barack Obama at the Democratic Convention': INCOMPLETE

Greitens did attend the Democratic National Convention in 2008, but Greitens does not appear to be any of the people in the ad video showing applause at the convention.

Brunner's campaign cited a July 2015 article from Roll Call. In the article, Missouri's former Democratic governor Bob Holden said he and Greitens drove to the convention together from St. Louis.

On July 20, Brunner's campaign launched a new ad targeting Greitens that appears to show his face in the crowd at the Democratic National Convention.

There is no video evidence of actual applause in released ads or published campaign materials, though he did attend the convention; therefore, this claim is incomplete.

'And Greitens’ praised Obama’s vision and leadership while asking for billions more in government stimulus spending': TRUE and FALSE

The Brunner campaign is referring to an open letter directed to President Obama and provided a copy of this letter to Target 8 upon request.

The letter is dated January 9, 2009, and opened with the statement, "Thank you for your steadfast commitment to engaging all Americans in strengthening our country." In reference to government stimulus spending, it said, "A targeted investment in national and community service and a non-profit stimulus package to match new investments from philanthropy would create hundreds of thousands of low cost jobs."

Further in the letter, it said, "This investment in national service will also provide a crucial, low-cost workforce for the nonprofit sector during challenging economic times, while leveraging hundreds of millions of dollars in private matching funds." The letter sourced in the ad has no mention of billions of dollars as a concrete amount.

However, it is important to note that Greitens is one of hundreds of people who signed this letter. Greitens is listed as number 345 in the signature section, as the CEO of The Mission Continues. Greitens did not write the letter alone.

The concluding paragraph does read, "Thank you for your vision and leadership for America," making the first part of the statement true.

With no request for billions of dollars, the second part of the statement is false.

'No wonder Greitens’ planned to run for office as a Democrat': INCOMPLETE

In Greitens' self-penned editorial for Fox News from July 2015, he wrote, "I registered to vote as a Democrat, and several years ago some Democrats even tried to recruit me to run for Congress."

Brunner's campaign said Greitens' connection with the Democratic Party goes deeper than that, and it cited a Politico Pro article titled "Eric Greitens' Democratic Past" which claims Politico obtained records that showed Greitens was involved in a months-long courtship with the party, culminating with a trip to Washington.

Politico Pro articles are only available to paying subscribers, yet the PAC Patriots for America has posted the article in full here. The link goes to an anti-Eric Greitens site, with his name mispelled as its URL.

As Greitens has admitted to having original roots in and leanings toward the Democratic Party but indicated he declined recruitment efforts by the party, this statement is incomplete.

Target 8 asked John Brunner why it was important for his campaign to air this attack ad on Greitens, to which Brunner responded, "I think the issue as we are coming down to the wire here is that everybody have a better understanding of all the candidates, what they stand for, their backgrounds, their experiences."

Brunner continued, "The only thing the voters have is whatever they've done in the past, and that'll be an indication of what they'll do in the future."

KOMU 8 News spoke with Greitens in a separate interview unrelated to Brunner's attack ad, and asked him how he felt about the attacks against him from the other candidates' campaigns.

Greitens said, "I'm the outsider, I'm running against folks who have been in twenty different elections. They represent the status quo, and people know that with them nothing's going to change."

Greitens continued, "So when we got into the election we knew that they'd attack us, and the reason why they're attacking us so hard now is we're the frontrunners in this race."

The most recent poll, released Tuesday by NBC affiliate KSDK, showed Greitens and Brunner as the narrow front runners at 25 and 21 percent, and all four candidates with almost identical favorability ratings with voters.