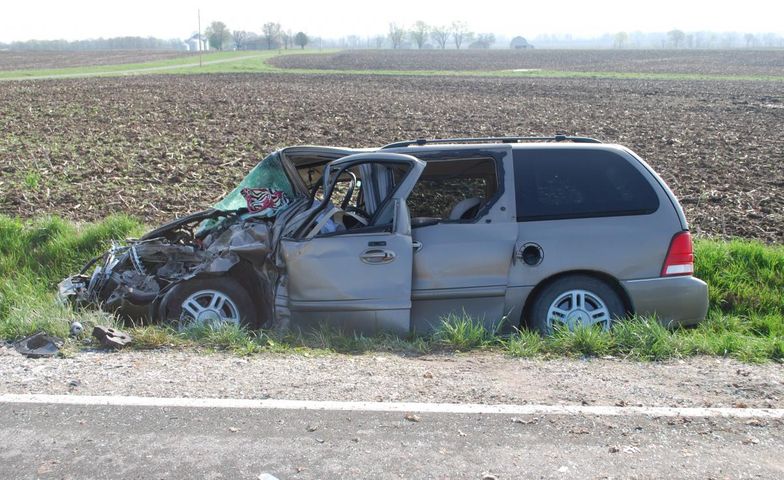 MOBERLY - A petition to change the laws for careless driving that results in death that received 500 signatures from across the nation in 24 hours is the labor of one family fighting in the name of their lost loved one. The family of Jessica Stoebe, a driver from Chariton County who, along with her unborn child, was killed in a car accident March 26. The family said it is is seeking justice to see that another family doesn't have to suffer the same loss.

The Missouri Highway Patrol reported the collision occurred after another driver, 40-year-old Bobbie Vollrath, crossed the center line and struck another vehicle driven by 18-year-old Austin Cole.  Cole was driving north on Highway 5 in Chariton County. The highway patrol said Cole lost control of his vehicle and collided into Stoebe.

Stoebe called 9-1-1 twice complaining about Vollrath's driving.  The first call took place five minutes before the accident. Stoebe's second call came 18 seconds before the crash, ending as she was killed on impact. When the officer at the scene asked why someone would call in a complaint, Vollrath said she ran off the road a couple times.

Missouri Highway Patrol's accident reconstruction reports determined that the actions of Vollrath failing to maintain her side of the roadway led to the fatality collision and are the sole cause of the accident.

Vollrath worked a 12-hour night shift before the accident.

"Bobbi had just got off work and she was heading home and she has no recollection of the ride from work to the accident. The only thing she remembers from the accident is looking up and hitting the truck," attorney Carmen Smith said.

"Best we can tell is she was really tired, falling asleep and so she crossed the center line," Chariton County Prosecutor Bryan Scheiderer said.

"He said in court. We assume she fell asleep. There's been nothing confirmed of what she was actually really doing," mother-in-law Penny Bennett said.

Stoebe was six months pregnant with a boy at the time of the accident. She also had a 3-year-old girl, Lily.

"Her priority was to be a mommy to Lily and she was really looking forward to the baby being born, giving me my first grandson," mother Cheryl Rudder said.

Scheiderer said he filed charges the day of the accident for careless and imprudent driving and failure to maintain the right half of the road, but did not believe there was enough evidence to pursue the more serious involuntary manslaughter charge.

According to the Missouri statute for involuntary manslaughter, a person commits this crime in the first degree if he or she:
• Recklessly causes the death of another person
• Operates a motor vehicle while in an intoxicated condition acting with criminal negligence to cause the death of two or more people.

Scheiderer charged Vollrath with a misdemeanor for careless and imprudent driving. Vollrath's attorney Carmen Smith said during court the Stoebe family made a statement and later the judge imposed the 48 hours in jail and the maximum $1,000 fine.

"There was no alcohol and no controlled substance in her blood system which if that occurs and it's enough that it's actually impairing someone's ability to drive it can result in an involuntary manslaughter case," Scheiderer said.

However, Vollrath did have a prescription drug known as Carisoprodol in her system. The drug warns it causes drowsiness and users should not operate a motor vehicle while taking it. Smith said Vollrath never had a problem with her medication before.

Scheiderer said the blood tests only show whether the prescription drug was present or not. The test do not show a quantitative measure of how much is in her system on that particular day like sobriety tests dealing with alcohol.

The Stoebe family said there should be harsher penalties for distracted drivers who cause accidents that result in death.

"She should have got more than a $1,000 fine and 48 hours in jail. I mean because of her actions that morning she's destroyed our lives. I mean she's completely changed everything. How do you tell a 3 year old that she's never going to have her mom again?" mother Cheryl Rudder said.

And this cry for justice comes after more than one accident fatality in the Stoebe family. On June 3, 2010, a MoDOT driver killed Cheryl Rudder's 17-year-old stepson Matthew Rudder. That driver did not face charges. Missouri Highway Patrol reports said the MoDOT dump truck pulled out in front of the vehicle, failing to yield as it approached Highway 63. The truck Rudder was a passenger in was traveling north on Highway 63 when the dump truck hit the passenger side.

"The law needs to change. It may not help us now, but eventually it's going to help somebody get the closure and the peace and the justice that they deserve," Rudder said.

"Something needs to change. You know I'm not sure jail is going to make the difference but there needs to be some inconvenience in these people's lives when they devastate a family, a little girl loses her mom and we've lost our grandson," Bennett said.

Scheiderer said that if he could prove beyond a reasonable doubt that prescription drugs impaired Vollrath a felony charge was available. He said it is a matter of proof, but the laws are in place to prosecute if a crime has occurred.

"I don't know that changing the laws would have helped this particular kind of case because I just didn't think the facts were there to prove that type of impairment as compared to your example of the person drinking alcohol," Scheiderer said.

A careless and imprudent driving ticket is four points against your driving record. An additional two points are assessed if the incident involves an accident. The six-point deduction equals have the points necessary to lose driving privileges in Missouri.

"The laws need to change where careless driving is concerned and it's not right. I mean she got 48 hours in jail, no probation, nothing. She's still driving today. She did not lose her license," Rudder said.

Smith said Vollrath's main concern is that the family believes she does not have remorse and she now wants to meet privately with the family. However, Stoebe family members said they are not ready for a face-to-face meeting.

"She (Vollrath) deals with this everyday she has nightmares. She feels badly for the family. Her heart hurts. Everybody's heart hurts," Smith said.

Smith said this accident could be a call for awareness instead of a vendetta.

"So if anything can be learned from this--if you're tired, pull over.  If you are behind an erratic driver, don't follow them. Pull over. If you feel like there's a car that the highway patrol needs to check in on, pull over and make that phone call. Be cautious. Be aware of your environments," Smith said.

Rudder sent a letter with her story to Missouri state officials, including Governor Jay Nixon, to review the laws for careless driving. If a new law passes, the family hopes to name it Lily's Law after Jessica Stoebe's 3-year-old daughter, left to grow up without her mother.