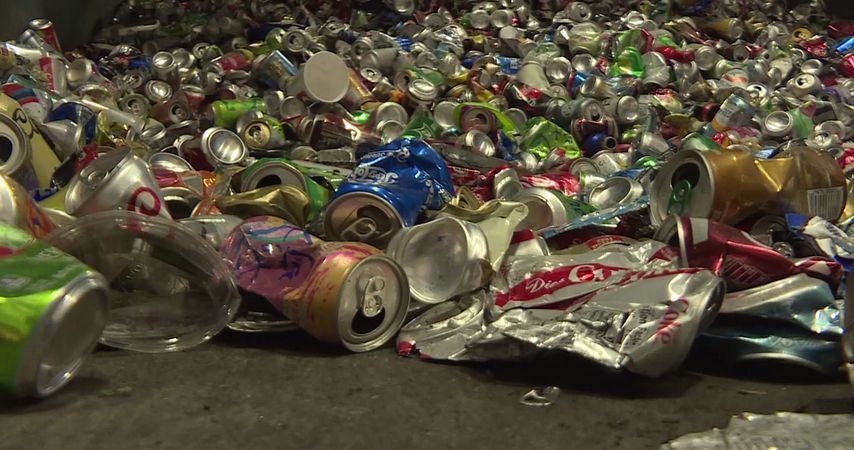 COLUMBIA - A decrease in demand for recycled goods 7,000 miles away is causing problems for Mid-Missouri's recycling industry.

In 2018, concerns over dirty or hazardous waste in recycling prompted China to ban recyclables with more than 0.5% contamination. According to Waste Management, the average contamination of recyclables at the curb is 25%.

"There was a concern, particularly on the plastic scrap imports, that they were causing environmental problems," said Joe Pickard, Chief Economist for the Institute of Scrap Recycling Industries. "Another part of the picture, certainly, is that China is wanting to develop its own recycling infrastructure within the country."

Pickard said the new standards are harder for American cities to meet, which has led to a drop in the price of recycled materials.

"When they're consuming that much of the world's feedstock, whenever all sudden, they stopped buying it, or stop importing it, well, that creates an oversupply everywhere," said General Manager of Midwest Fibre Sales in Springfield, Byron Wilcox.

“As the demand for products decreased with China no longer accepting recyclables from the United States, it has caused a reduction in the demand for the products we produce here at our facility," White said.

He said Columbia has historically sold recyclables to companies in America, but with China no longer in the market there is more competition.

"The companies that we used to focus on, or used to mainly buy materials from us, are now able to buy material from a wider area," White said. "In essence we are still selling to the same vendors, the main effect we are feeling is the reduction in what we are receiving from that product when it goes on the open market.”

White said the city is seeing the majority of affects on the fiber side of its facility.

While Columbia feels a small pinch, other areas of Mid-Missouri have felt the brunt.

In a letter to customers, the company said China’s changing standards made it impossible to maintain its courtesy recycling service.

Wilcox said rural communities are not being hit any harder than bigger cities.

"Rural communities themselves were even in the insanely high markets we were having - they were barely breaking even," he said. "They may not have the ability to weather the storm, to ride out the bad markets."

White says Columbia is better positioned to withstand the changes because the city operates a dual-stream system in its Material Recovery Facility.

"We are collecting the material from the citizens already somewhat pre-sorted, which allows us to have to have the same quantity of inputs to get it to an acceptable limits of contamination prior to selling it on the open market," White said. "Most cities are operating a single stream system where everything is intermixed, and more inputs are required for the separation of that material into marketable goods.”

While China was a large consumer of American recycled goods, Pickard said it is important to point out the American companies are the largest slice of the pie.

"We need to keep in mind that product should be designed for recycling, to make it easier to recycle these products," he said. "We need to develop, and markets to make sure that the materials, you know, come through the bins and get recycled through the recycling facilities have an end market that they can be sold into so there's really a whole sort of recycling chain of responsibility."

Wilcox said he believes these changes will be here to stay.

"If you look at some long term pricing, the last seven years were the anomaly, with paper and cardboard being worth way over $100 a ton," he said. "That was the anomaly and now, this is just a very hard course correction to the norm that we experienced for 30 years beforehand."

Wilcox said it will become the new reality of the recycling industry moving forward.

"It's going to be a very slow acceptance of what I would call this new reality or what always should have been," he said. "There is going to be a cost to it."

While Columbia's recycling profits have been compressed, White said the city sees more value in recycling than simply making a profit.

“The city wants to do the right thing by the environment," White said. "We want to keep this material out of the landfill where it is not going to break down or consume airspace, so the city finds a lot of value in the processes associated with recycling outside of generating revenue."

As of October, St. Martins is still looking for recycling solutions.