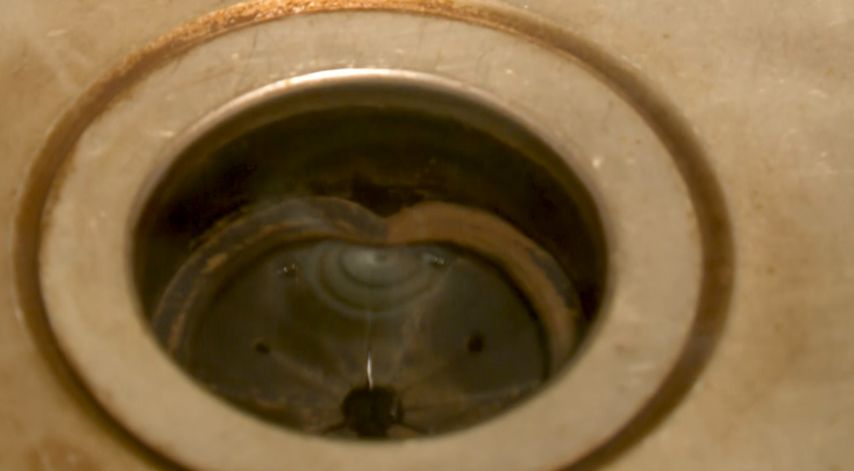 COLUMBIA - In January 2019, the Columbia City Council decided rate payers would collectively pay around $1 million more in water rates. At the same time, an account with almost three times more money than the predicted increase was hidden in a spreadsheet, unused for years.

City staff knew about the account for months. In May 2018, Assistant Director of City Utilities Sarah Talbert said she first began searching for answers as to why the account was limited to pay for capital improvement projects.

"That's when we were working with Finance to determine if there was any documentation, as to why and who authorized that to happen," she said.

Talbert said city staff investigated the growing account for seven months, but couldn't find its original purpose or who put the money aside. Staff traced the account back to the mid 2000s, which was further complicated by the city's high employee turnover rate.

Their investigation on the $2.9 million account wasn't communicated to city council members before council voted on raising water rates in January 2019. That 4-3 decision happened after voters approved a water bond in August 2018.

Talbert told Target 8 that city staff did not feel the need to let city council know of the account or the investigation, since staff closes projects and moves any leftover money all the time. City staff could not answer when they last moved over an account worth millions without notifying council.

The long investigation found no records on how or why the funds were mischaracterized, according to staff.

Here's what our Target 8 investigation into the finances of Columbia Water and Light found from city documents along with conversations with city staff, council members and members of city commissions.

"I think there have been too many questions of how the department was managing its finances," Ryan said.

She said they have gone to every single Water and Light Advisory Board Meeting since October 2016.

The Water and Light Advisory Board is a five-member city board with the purpose to advise the utility and council on their decisions. The board normally gives their opinions on bond decisions, discusses utility business and releases financial reports.

One of those financial reports, the Quarter Capital Improvement Plan Progress Reports, detail different capital projects and money reserved for those projects.

After the city council raised water rates in January, the 1st Quarter Capitol Progress Report was published in February.

The top line of the report published shows an account labeled "pooled cash" under the project name "Connection Fee Revenue" for about $2.9 million. The connection fee revenue is one of many different fees a new customer pays to join the city's water system.

"We've had a lot of turnover and they had to go through previous employee files and council stuff to see if we can figure it out," she said. "We had other things going on."

Jim McDonald, the city's assistant finance director, said the person at the position who would originally restrict an account, like "Connection Fee Revenue," has changed four times recently.
John Conway, the former Water and Light Advisory Board Chair who still works part time for the city, said the long investigation process was not necessary and the connection fee revenue was obviously misplaced.
He said these sheets have financial funds reserved for capital projects, however the connection fee revenue is money the council can use at its discretion because it's marked as revenue.
After the long investigation, city staff could not determine why fees were restricted or who did so more than a decade ago. City staff moved the $2.9 million to unrestricted funds, which also removed it from the next quarter report.

You can compare the two documents here by dragging the slider:

Conway said these newly unrestricted funds could have lessened a rate increase to the city's water customers.
"This is a financial resource to pay off those bonds without increasing the rates," he said. "Therefore, you're paying a greater water bill than needed because they're collecting more revenue than what is needed."

The four council members who voted for the increase were Karl Skala, Michael Trapp, Clyde Ruffin and Betsy Peters.

Target 8 reached out multiple times to Clyde Ruffin and Betsy Peters about their decision and our findings, but they never responded.

Michael Trapp, who represents Columbia's Second Ward, said he doesn't regret his vote, but added he doesn't know how he would vote if he knew about the mischaracterized funds.

"I think based upon the information we had, we made the right decision," he said. "Would we have made a different decision if we had different sets of information? Possibly, I don't know."

He said the higher than necessary rates customers are currently paying can be offset in future rate increases.

"It's a temporary situation," he said. "We'll put means to correct it based on the most accurate information that we have now and I trust those fundamental processes."

Karl Skala, who represents Columbia's Third Ward, said he wishes he knew about the account, but it wouldn't have changed his vote to increase water rates.

"Given that Water and Light is a very complicated, serious, enterprise situation, I tend to put a lot of weight into their recommendations," he said.

Skala understands the unrestricted funds were more than the expected revenue increase passed onto voters. However, he believes these funds can create a "rainy day fund" for the utility through surplus funds and create a healthier financial Columbia.

The rate increase was part of the August 2018 water bond to add safety elements to improve the city's water treatment.

Falling behind on finances and projects

Sarah Talbert said 3% of the approved 4% increase in revenue was created to pay off bond debt. 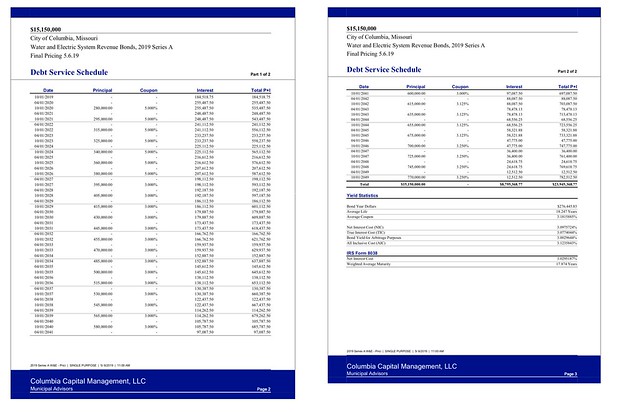 Target 8 obtained a copy of the bond repayment schedule for the water bond. The $2.9 million would have paid off debt payments through September 2023 without ever having to raise the rates.
Matthew Lue, who was named the city's finance director in October 2019, said the city is still behind on its financial commitments.
"When you look at the amount of projects we have to do in the utilities department, even with that number you're not covering the amount of projects you need to do," he said.
A 2016 consultant report stated about 40% of the assets, like equipment and systems, at a water treatment plant had exceeded their expected life span.
Columbia Water and Light's use of consultant generated reports
In 2017, Columbia Water and Light paid about $40,000 to Raftelis Financial Consultant, Inc., who performed a comprehensive water cost of service study.
The study developed a financial plan for the water utility, reviewed water rates and ensured adequate coverage for the water bond voted on August 7, 2018.
However, the consultant's final report came out almost three weeks after voters approved the bond August 7, 2018. At a January 2019 council meeting, Mayor Brian Treece called the report "unacceptable."
Michael Trapp said he wasn't happy about the bond process and understands holding outside companies to contracts has been a weakness for the city.
Karl Skala was also disappointed with the consultant report being late and said he would urge and consult with staff to look into holding consultants to contract.
"If it's necessary, depending on the extent of the violation of the agreement or contract that was made, then we would have to consider taking proper action against paying them their full, whatever was agreed to in the first place," he said.
City Spokesperson Steven Sapp said the consultant report took so long to produce because of difficulties around gathering data after software changes.
Inside the consultant report, Raftelis recommended the utility charge a 5% annual rate increase over the course of five years, for a total of 25%. However, voter information from the city stated, "Water customers will likely see a total 11% increase over a four year period to cover bond payments."
The council ignored the consultant's recommendation and approved a city staff recommendation of a 4% increase to the water rates for 2019. It's still 1% percent higher than promised in the voter information guide created by the city.
The usage of consultant reports has also frustrated Julie Ryan for years.
"We use taxpayer money to fund these reports and then they never do there due diligence with those reports," she said. "I think these are things that point to the types of behavior Water and Light has come to accept as a department and what citizens have had to accept."
Leaders and citizens call for a performance audit

In March 2018, the Columbia City Council unanimously passed a resolution for then City Manager Mike Matthes to obtain an estimated cost for a performance audit for the city.

A performance audit assesses how effective and efficient an entity's operations are.

When the estimated cost from the State Auditor's Office came back at $500,000 to $750,000 for the entire city and to last over two to three years, some council members' enthusiasm cooled.

Mayor Brian Treece, however, has continually pushed for an outside performance audit for Columbia. He campaigned on the issue in multiple ads. He said the purpose of a performance audit is getting a fresh set of eyes to look at the city's finances.

"I think there are small piles of money and I think there are buckets of money out there," he said. "In this case, money in the form of connection fees had been set aside and were determined to be untouchable, when in reality, they have been booking the numbers wrong."

Maria Oropallo, a member of the Finance Advisory and Audit committee, agrees with Treece and believes a performance audit would have found millions more booked incorrectly.

"We're discovering things now that are bad practices," said Oropallo. "We need a performance audit so that we can see, 'Are things being done efficiently, effectively and economically?'"

Former Water and Light Advisory Chair John Conway said the past performance from the utility is the reason to have a performance audit for the utility.

In addition, the city has a budgeted auditor position, however, the job has remained empty since June. Carey Bryce was hired in February, but left after only about four months on the job.

City Spokesperson Steve Sapp said they currently have four applicants for the job. The city is also expecting to receive bids in early February for an independent audit from a private firm. The city expects the cost to be less than the state auditor's estimate, however, they could not give a reason for their expectation.

Sapp also added the performance audit is different and separate than state-mandated financial audits, which the city already does.

"He brings council information as he sees it," he said. "That allows the council to take action instead of allowing those problems, and the financial impact of those problems, to compound."

However, for customers who are actively involved in the utility, like Julie Ryan, the $2.9 million account represents the consequences of Columbia Water and Light's frustrating pattern of complexities.

Columbia Mayor Brian Treece tweeted about why he voted against the water tax increase following the broadcast of this investigation.

Thank you @EthanSteinTV. These ongoing issues illustrate why I voted against the water rate increase and called for a state audit and performance audit of city finance policies. Columbians should have confidence how their tax dollars are managed and spent. https://t.co/mXN7hjmOE3