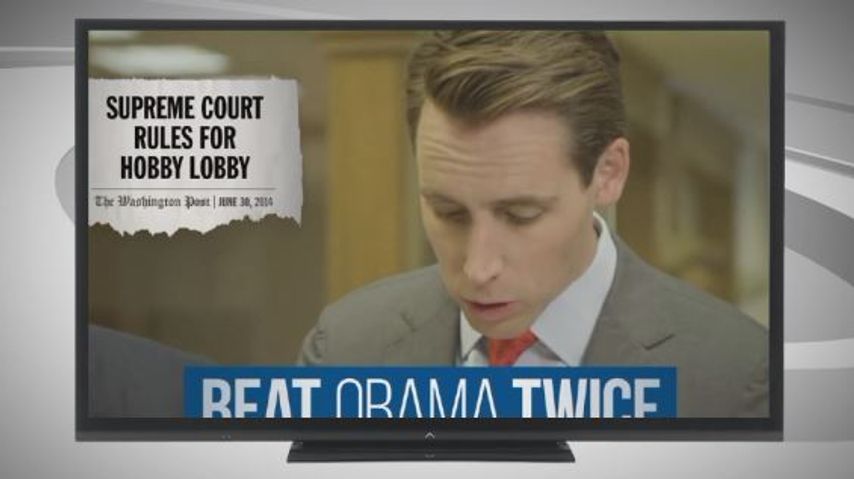 JEFFERSON CITY - KOMU 8's Target 8 Investigative team analyzed claims made by Josh Hawley, a Republican running for state attorney general, in one of his campaign ads. Hawley, who teaches at the MU School of Law, faces Sen. Kurt Schaefer, a Republican from Columbia, in the upcoming primaries.

In one of his campaign ads, "Ladders", Hawley branded himself as a "Jefferson City outsider" with extensive experience as a Constitutional lawyer. Hawley began his law career in 2008. In the ad, Hawley touted his experience, including going to the Supreme Court and winning twice against the Obama administration.

While he is indeed new to the political sphere, KOMU 8 News found his short claim of winning twice at the Supreme Court does not fully explain his roles in the cases.

While he did have a role as a litigator in both the Hobby Lobby and Hosanna-Tabor cases, in the Hobby Lobby case he was not featured on the docket; though his wife, Erin, who is also an attorney, was. His campaign provided KOMU 8 News with a brief filed in the case, listing his name, and explained a docket listing or lack of one does not indicate level of involvement.

Hawley did not say he personally took the lead but did say he was influential in the case.

"Well this means that I was one of the lawyers representing them at the United States Supreme Court. We have a team of lawyers who are Supreme Court practitioners, and I was one of those. And so it was a privilege from the beginning when they first asked the court to take the case all the way up to the end when it was decided on June 30, 2014," Hawley said.

Paul Clement, former solicitor general during the George W. Bush administration, was the one who argued before the Supreme Court on Hobby Lobby's behalf.

"I was privileged to collaborate with Josh Hawley on the Hobby Lobby case. The lawyer who steps to the podium in a Supreme Court case benefits from the contributions of colleagues who have often worked on the case for far longer. That was particularly true in Hobby Lobby. The  victory in that case was the result of the contributions of numerous lawyers for Hobby Lobby and in the companion case of Conestoga Wood. Josh was a valued member of the Hobby Lobby team, as reflected by the fact that his name was featured on the front cover of the brief," Clement said.

"Most of the argument at the Supreme Court takes place in written filings that unfold over again a series of months and sometimes up to a year or more so. I was involved with that from the very beginning. My law firm The Becket Fund for Religious Liberty was the lead firm for the Green family and Hobby Lobby and had been from the very beginning," Hawley said.

Hawley was listed as counsel for the Hosanna-Tabor case and was included as one of five lawyers with his firm out of many other attorneys. It was Douglas Laycock, a professor at the University of Virginia, who actually argued in front of the Supreme Court.

Editor's note: This story has been updated to include the Hobby Lobby brief link as well as a quote from Paul Clement.