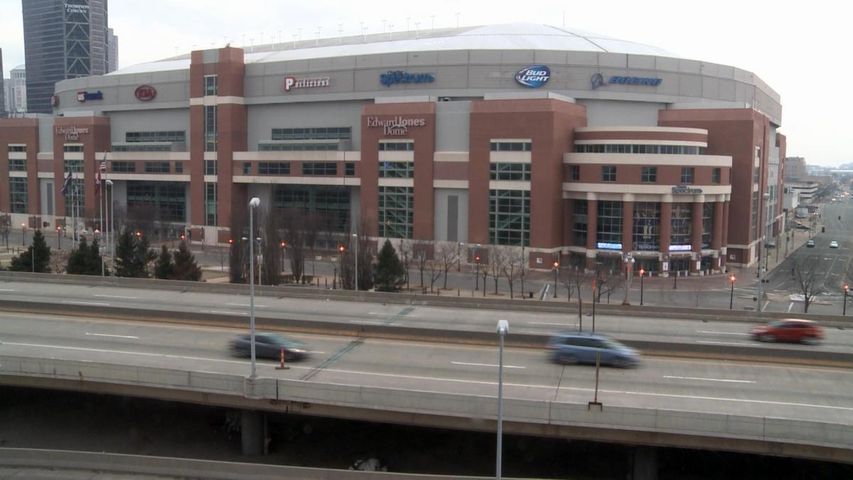 ST. LOUIS - State leaders are attempting to come up with a realistic way to keep St. Louis a NFL city and avoid a possible void in the presence of a professional football team. In this rapid process, however, Rams stakeholders seem to be on a different page.

Stan Kroenke, the owner of the St. Louis Rams, hasn't talked to the public since he introduced Jeff Fisher as head coach in 2012. Even Rams beat writer Jim Thomas, who used to get an exclusive interview with Kroenke every March, has been cut off from his source.

"It's been a minute, as the kids say, since Stan has talked to the media," Thomas said. "I've been shut down on that. I've gone back and forth on that many times with the people that are involved with Mr. Kroenke."

Even though he has been quiet, Kroenke made a substantial purchase in January 2014, when the Missouri billionaire bought a 60-acre lot in Inglewood, California. Thomas said the potential use of this land is obvious.

"You don't go through all that just for a leverage move," Thomas said. "He wants to move the Rams to L.A., to Inglewood. It's very clear now, whether he's enunciated that to anyone, public or not."

The Rams currently play in the Edward Jones Dome, which is run by the St. Louis Convention & Visitors Commission (CVC). The team pays the CVC $250,000 a year to rent eight regular season games in the dome.

Even before Kroenke's purchase, the Rams and the CVC had multiple discussions about upgrading the Dome. However, none of the talks resulted in substantial changes.

Tim McKernan of CBS Radio 920 in St. Louis said a key reason for the lack of progress is the CVC's $124 million proposal to upgrade the Dome.

"There was a very lackluster proposal put on the table by the CVC in St. Louis," McKernan said. "The Rams' standpoint was that was the time for St. Louis to act and there was no action."

Thomas said, "It was laughable."

The 30-year lease the team signed when the team moved from Anaheim, California to St. Louis in 1995 required the Dome to remain in the "first tier" of all NFL stadiums every 10 years. If not, the team is allowed to switch to year-to-year leasing.

The Rams proposed a $700 million renovation, considerably higher than the CVC's $124 million proposal. The matter went to arbitration where mediator's sided with the Rams.

"One hundred and twenty four million to reach top tier status? I don't know if your viewers have been to many of these stadiums, but they are palaces now. I'm not saying it's necessarily right, but it's just the cost of doing business in the NFL," Thomas said.

The Rams marked their 20th year in the Dome by notifying the CVC in January that the team would be shifting to a year-by-year lease agreement.

"With year-by-year, you can play that one year, and then once that year is over, you can move," Thomas said. "And that's where we're at now with the Rams."

Below is a timeline of the Rams' history in St. Louis. Click here to read more.

Gov. Jay Nixon has been ramping up his actions despite Kroenke's silence. In December, the governor assembled a task force to look at the Rams situation. The task force consists of attorney Bob Blitz and former Anheuser Busch executive Dave Peacock. They are working to come up with a plan for a new St. Louis stadium and released renderings of the proposed stadium on March 2.

"The biggest frustration on the part of the Rams has been no activity from the state, the city and the county," McKernan said. "Well, now they have their activity. What did it take? It took Stan Kroenke announcing the Inglewood project."

Thomas said it's possible Kroenke is actually the instigator.

"There are some people, and I won't give you names, who would think that the Kroenke people found out about the St. Louis plan and they announced their Inglewood thing to kind of trump or to one up," Thomas said.

Former Rams Super Bowl Champion, running back Marshall Faulk, talked with CBS Radio 920 before this year's Super Bowl. He said, no matter who acted first, St. Louis stakeholders might be acting too late.

"I haven't spoken in this manner yet, but I'm going to say it," Faulk said. "I'm disappointed that the powers to be in the city of St. Louis waited until now to make a proposal."

As a part of the early proposal for the new stadium by the riverfront, Nixon talked with Ameren Missouri and the Terminal Railroad Association (TRRA) about relocating some of their infrastructure. Nixon said Ameren committed to moving two transmission towers and power lines while TRRA agreed to relocate tracks that intersect the land the stadium would be built on.

Nixon said the railroad changes would cost approximately $3 million, but TRRA's chief legal officer Asim Raza said, "We are very hesitant to give that number. Governor Nixon had said three million, but it could be more than that. We don't exactly know how much more."

Even though Nixon has said the proposed site is mostly full of vacant lots and vacant buildings, Al's Restaurant remains in the area and has plenty of St. Louis history behind it.

The restaurant opened in 1925 and is the oldest same-family and same-location restaurant in St. Louis. Pam Neal is the owner and said she is frustrated with the lack of communication.

"We really have not heard from anyone directly from the governor's office or from the regional sports authority," Neal said. "As small as we are, and as little as an impact we would have toward the stadium plan, it is our hopes that we can talk to someone and see about keeping us around. I would have hoped that they would have reached out to us since we have been here, we've been part of the St. Louis history and culture."

Caleb Rowden, the 44th District State Representative and Chair of the House Economic Development Committee, said, "There's any number of credits that could potentially be useful in this regard. So any of those bills would go through my committee, so that is kind of where my relevancy lies right now."

Rowden and Nixon had different predictions about how taxpayers will be impacted.

Rowden said, "The governor's going to have to be very creative and very intentional about making sure that at the end of the day that we're not throwing a bunch of new taxpayer dollars at this. He will need to find a way to do this to where there's not going to be a huge cost to the taxpayer."

Nixon said, "He's wrong. I don't know why I need to expand on somebody who is making up things. But the bottom line is I have laid out six principles. Protects taxpayers is one of those. No new additional tax burden."

Some Rams supporters call Kroenke "Silent Stan" and say he is driving much of the confusion and miscommunication.

"If Stan isn't going to tell us what he's going to do with the team, there's no commitment on his part," long-time Rams fan Dave King said. "In my professional life, if I would make that kind of decision, I would lose my job. I cannot support an owner that will not practice any type of ethics in his negotiations. I can buy tickets off StubHub for half what I pay Stan every year and still go to the game and get better seats."

Thomas said fans should not forget what comes before "Rams."

It is even unclear if Nixon has talked to Kroenke.

When asked about his communication with Kroenke during a teleconference in November of 2014, Nixon said, "We've remained in good communication throughout all of this, obviously, with everybody."

Whatever the future holds for the Rams, McKernan said most people he talks to just want answers.

"Stan Kroenke just issuing a statement – anything – would be more valuable than a ten win-season because the people of this city are convinced that he's taking this team and moving it."

Rowden said the task force has to look into many different options with the proposed stadium.

NFL commissioner Roger Goodell told the league this past December he would not be accepting any relocation applications for the 2015 season. January 1, 2016 will be the first day teams can officially apply for relocation.

(Editor's note: This story has been updated to provide a link to the arbitrator's decision on renovation proposals and add a timeline.)