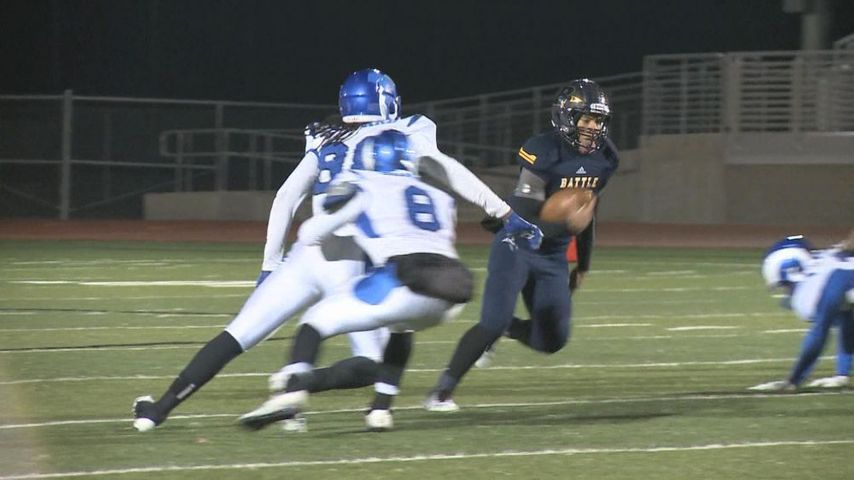 COLUMBIA - A national decrease in high school football participation has been attributed to heightened awareness of concussions. The game of football was thrust into a new spotlight after thousands of former professional football players sued the NFL in a concussion lawsuit, a case that ended last spring with a judge ruling in favor of the athletes. This past winter, the Golden Globes-nominated movie "Concussion" depicted the dramatic discovery of the condition, and directed more criticism at the NFL.

While concussions continue to make headlines, the number of high school boys playing football has dropped. According to the most recent statistics from the National Federation of State High School Associations (NFHS), there were 25,771 fewer high school football players in the 2014/2015 season, than there were in the fall of 2009.

These heightened concerns over concussions and brain injuries are not just a national phenomenon. Last year, a high school in St. Louis County disbanded its football team, for fear of players' safety.

To get a better understanding of the medical risks associated with football, KOMU 8 News reached out to Stefanie West, an athletic trainer at Hickman High School. West said, in the past, trainers and athletes were much less inclined to notice the signs and symptoms of a concussion.

"Thirty years ago, even twenty years ago, coaches would just say, 'oh, you got your bell rung, it's no big deal,'" West said. "I've been doing this for 25 years, and I treat concussions vastly different now, than I did when I started."

The trainer said, now, athletes and coaches are trained to recognize the signs of a concussion much sooner.

"Athletes now, from a young age, are educated in 'here's what a concussion is, if you have a headache, report it,'" West said.

Despite recently-heightened concussion awareness, West said the game of football is not any more dangerous now than it used to be.

"Certified athletic trainers, across the board, will generally say we get the same amount of injuries that we had ten years ago, or even five years ago," West said. "It's just a matter of how much they are reported."

Battle High School's head football coach, Justin Conyers, agreed. He said the game is safer now than it's ever been.

West said medical professionals now know way more about concussions than they did ten or twenty years ago. She said if retired NFL athletes knew then what today's athletes know now, things would be very different.

"Nowadays, we are so informed, you see everything," West said. "We didn't used to know what was going on in the NFL. You saw it on Monday night, Sunday night... that's all you saw. Now, we see all the stories. The background stories, the retired athletes with dementia... it's all out there. And the parents and athletes get a little concerned."

Conyers said the troubling stories of retired NFL players reverberate down to the high school level.

"That does make it a little rough," Conyers said. "Parents get a little scared about their kids, with the concussion issues and what that may lead to, like further injury later in life."

However, Conyers said doctors, trainers and coaches have learned from the past.

"Now, there's so much information out about concussions," Conyers said. "It's made sure the game is a lot more safe now than it was, even when I played."

West said from an early age, today's football players are taught to protect their heads, and report any signs of a possible concussion. West said this has created a very apparent cultural change in high school football.

"The athletes have changed," West said. "The parents' attitude... the athletes' attitude about 'how hard do I need to push myself...' that has changed. Football coaches have noticed it. That die hard attitude of the past... that's gone away."

Conyers said the state has adopted new rules to help protect the players. He said while some rule changes have been for the better, he worries too many new regulations will have a negative effect.

"The game is forever changing, and I think the scary part of that is, you feel like the contact piece is slowly being taken away," Conyers said.

Conyers told KOMU 8 News, in years past, Missouri high school football teams were allowed 25 days of "contact" practice every summer. This year, however, MSHSAA will only allow 20 days of contact practice.

Conyers said those summer contact days are vital to prepare the athletes for the fast-paced, full-tackle games in the fall. Conyers said he is worried about not having as many days to practice proper hitting technique.

"I think that hurts the kids more than it helps the kids," Conyers said. "That time lets us get acclimated to having that helmet on, having those shoulder pads on, learning how to keep your head up. It's not full-tackle in the summer. We're learning how to use proper technique. My fear is, we lose those days, now those kids aren't as conditioned, they're not as inclined to use the proper technique as we get into season. Then the minute we get into full pads, and we're full contact... our kids aren't ready for that."

Though injury is always a possibility in football, West said most local parents don't express any concern about concussions until their child has one of his or her own.

"I don't get a lot of concern about it, until their athlete has had a concussion," West said. "That's where the red flags start popping up, and then they are a little more hesitant to let that athlete go back in the sport."

Conyers said most parents in Columbia don't express too much concern over concussions because they trust the coaches to watch out for their kids.

"I think it's about the community, if they believe the coaches are teaching good technique," Conyers said. "Making sure safety comes first with their kids."

Conyers said his coaching staff takes their responsibility very seriously, and they spend a lot of time emphasizing the importance of proper tackling form.

However, Conyers made it clear that there will never be such a thing as "concussion-free" tackle football.

"I mean, it's just not ever gonna happen," he said.

"It's a physical sport," Conyers said. "It's a violent sport. A lot of people want to use the world 'contact.' It's a collision sport, it truly is. On Friday nights, kids are going out, and playing physical. There are going to be some hard hits. But that's what the game is about."

Conyers said pain and injury are a fundamental part of football. He said his players understand that when they play football, they might get hurt.

"There is a risk, but there's also a reward that comes with this game," he said.

Conyers said football can be a violent game, but it teaches young men valuable lessons.

"It's about 'are you willing to commit yourself, to something bigger than yourself,'" Conyers said. "To be a part of this team... to grow and to learn way more valuable lessons out of football, than just the game. And I think whenever parents look at that, when they see how their young men develop... I think that's encouraging to parents to let their kids play."

The numbers in Columbia

After looking at the national numbers, KOMU 8 News reached out to local high school coaches and athletic directors, to see how participation has been affected on the local level. The athletic directors at Hickman and Rock Bridge were able to provide MSHSAA-verified numbers for the years 2015-2016, but they said they could not find record of any participation numbers before that.

To get the participation numbers for the years 2000 and 2005, KOMU 8 News dug through old yearbooks at the Boone County Library.

Here's a look at the number of high school football players in Columbia, per year. Numbers with (*) are approximate values based off team rosters in yearbooks, not records from coaches or MSHSAA.

Even amidst the growing concussion concerns, and national high school participation decreasing, football appears to be alive and well in mid-Missouri.

High school athletic officials in Columbia said this recent surge in football participation is mainly due to the opening of Battle High School.

Conyers said by adding another football team, the city created more slots for players. And when it comes to football teams, "if you build it, they will come."

Conyers said the creation of a new high school gave a chance to a lot of kids, many of whom would never have thought to try out.

One of those students, is Tyler Gray.

Gray almost went his whole high school career without playing football. But in May of 2015, the spring before his senior year, he decided to go out for the team.

"I started going to workouts, and then I ended up getting the starting corner spot," Gray said.

Gray said, at first, he had a few reservations about playing football, due to his size.

"Everybody has that image of football where, if you play, you're gonna get injured," Gray said.

But after some encouragement from his coach, the former basketball player decided to put away his sneakers, and put on the cleats.

Though he has not played the game very long, Gray said he knows football is a crucial element in the lives of many young men.

Though he is no longer a high school athlete, Gray's days of football are far from over. After one season of football with Battle High School, Gray managed to land a spot as a preferred walk-on for Missouri State's football team. He starts practice this fall.

The numbers in mid-Missouri
KOMU 8 News reached out to several smaller schools in mid-Missouri, to see if they had noticed a different trend. In a statement to KOMU 8 News, Pat Lacy, the athletic director for Southern Boone County High School, said his school has also seen an increase of participation.
"We have had an increase in numbers in the high school football program each year for the last 4 years," Lacy stated. "Middle school football has also had an increase in numbers, or stayed the same the last 4 years."
Lacy said coaches at Southern Boone do their best to keep their roster full, not just because it makes a better team, but also because it's safer for the younger athletes.
"When you do have a drop in numbers, it is a concern," Lacy stated. "You might have to play a 9th grader that is going up against a senior, and the physicality of the game can lead to injuries. Currently that is a goal of our head coach, to get good numbers out of each class. It is really important to get a good number out for each grade, to prevent those situations."

In the coming weeks, many mid-Missouri high school football teams will start summer practice to prepare for the season. Conyers said this year, his team will be about 120 players strong.