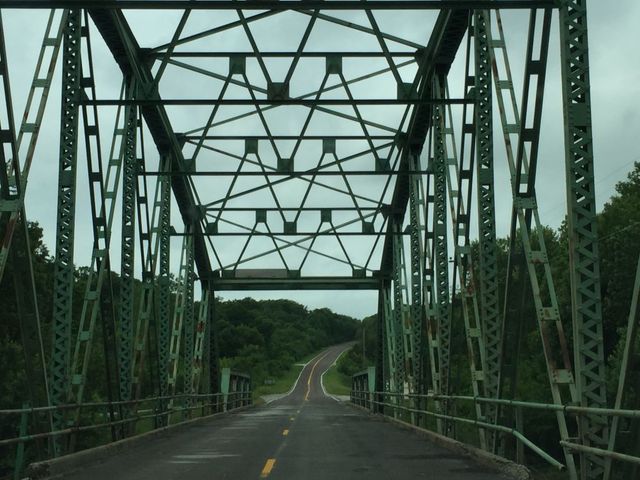 COOPER COUNTY - You may have heard Missouri has one of the highest numbers of structurally deficient bridges in the entire country.

KOMU 8’s Target 8 investigative team wanted to know what exactly this means for people who drive on those bridges everyday and just what puts Missouri on this list.

One of the lowest-rated bridges in the state

Just a few miles north of I-70 near Blackwater in Cooper County lies a green and yellow bridge. Area residents know it well. One woman told KOMU 8 News that she feared for her life after driving on it in a snowstorm.

Walk about 500 feet away from the Lamine River Bridge and you’ll reach a contracting company filled with people who have to drive on that bridge everyday.

Data from 2016 from the Federal Highway Administration showed an average of 442 vehicles drive across the bridge everyday.

"It definitely needs to be replaced,” said project manager and local resident Bradley Vollmer. “It definitely has some rebar showing, and it's kind of scary driving across it."

The Federal Highway Administration assigns each bridge a sufficiency rating, which is a number on a scale of 1 to 100—100 being the best—that shows the overall fitness of the bridge.

Data from 2016 shows Missouri has four bridges with the worst possible 0 rating. Two are in mid-Missouri. Both are on the Lamine River in Cooper County, and were built in 1900 and 1913.

The FHWA rated the Lamine River Bridge as a 2 out of 100. The Missouri Department of Transportation uses a different rating system and rated the same bridge as a 3 out of 9, but department officials couldn’t account for the drastic differences in the national and state ratings.

However, several MoDOT officials, including the area engineer for Cooper County and a senior historic preservation specialist assured KOMU 8 News that the Lamine River Bridge is still safe to carry traffic.

“I'm very proud of the fact that in Missouri, politics don't enter into it,” said Dennis Heckman, MoDOT state bridge engineer. “If a bridge needs to be closed, we close it. If I won't let my family drive on it, it's closed.”

Vollmer lives in Pilot Grove, which means he has to take the bridge everyday to get to work. He said he’s seen MoDOT employees patch up the bridge in the past.

"When there's heavy rain, some of the potholes kind of get reopened,” Vollmer said.

For the residents of Blackwater and the surrounding area, bridges are quite a point of contention. Farmer Matt Ivy said it’s a large agricultural community, and every mode of transportation is important.

Several locals complained to MoDOT and Cooper County after multiple county bridges in the area were shut down.

MoDOT has allocated funding for the Lamine River Bridge with plans to let it out for bid in the fall of 2018. Construction on a replacement bridge will start the following year.

The residents just have one request for construction: Make it fast.

"I think they're pretty notorious for 'OK, let's shut it down, and then let's not start on it for five more months or a year,'" Ivy said.

Construction to rebuild the bridge is an estimated $4.8 million, including design, utility and the roadway, according to MoDOT.

Missouri has more than 24,468 bridges, which is the sixth most in the country, according to the American Road & Transportation Builders Association. The Missouri and Mississippi rivers largely contribute to the high number of state bridges.

There are a total of 3,195 structurally deficient bridges in Missouri, ranking it as the state with the fourth highest number of bridges in this category.

Number of Structurally Deficient Bridges in Each State
Infogram

The status “structurally deficient” means the bridge has at least one structural defect, according to the National Bridge Inventory Database. Keep in mind: This doesn’t necessarily mean the bridge is unsafe, but it could be on the way there.

“Most of (the bridges) were designed to last 50 years, with the harsh winters and the hot summers that many years, they just get worn out and beat up,” Heckman said, adding that MoDOT operates more than 10,000 of the state’s bridges.

Heckman said MoDOT tries to work on 100 bridges a year, but about 100 become structurally deficient each year, so the numbers balance out.

MoDOT workers also do preventative maintenance on bridges so they can keep good bridges in good condition.

Bridges can also be assigned “functionally obsolete” status -- a completely separate category -- meaning they don’t meet today’s bridge standards, such as not enough lanes to accommodate traffic or not a high enough clearance to allow oversized vehicles.

These ratings are based on three components: the deck, superstructure and substructure, according to the National Bridge Inventory Database.

The deck is the bridge’s supporting surface, the superstructure includes the elements that support the deck (steel beams, concrete frame, steel cables, steel truss, etc.), and the substructure is the bridges foundation, which includes abutments and piers.

MoDOT’s main funding source is a 17-cent-per-gallon gas tax, and the department also gets part of the sales when people buy cars and trucks. Neither state nor federal funding has been cut for MoDOT, Heckman said.

"The problem is: We get 17 cents per gallon, and people get a lot better mileage with their cars than they used to, so we get a lot less money.

“Added on top of that, inflation. The gas tax hasn't gone up in 20 years. Well, everything costs more than it did 20 years ago, but we're still getting the same 1996 dollars," Heckman said.

Missouri has the seventh largest highway system in the country, but it is the 47th state in revenue per mile: a combination that Tom Crawford, the president and CEO of the Missouri Trucking Association, called a “recipe for disaster.”

"You've got some dynamics with highway funding in Missouri that just don't add up for success, and the first is the number of roads and bridges that MODOT is responsible for,” Crawford said.

FHWA data shows that it would cost between $1 billion and $2 billion to fix all of the state bridges currently eligible for repairs.

Heckman couldn’t tell KOMU 8 News exactly how much money MoDOT spends on bridges specifically, but he said the department spends about 800 million a year into bid lettings, which includes all infrastructure -- from roads to bridges to traffic lights.

Deciding which ones to replace

Mike Schupp, who serves as MoDOT area engineer for Cooper and four other counties, said he often hears complaints about the Lamine River Bridge and others in the area. He said residents from all over will call the department and ask, “Why don’t you fix my bridge?”

“It’s not that we don’t want to. It’s that we need to prioritize,” Schupp said.

A number of factors go into deciding which bridges for MoDOT to repair or replace. One of the top ones is length of detour.

“If a bridge is closed and it's a 5-minute detour, that's not as bad as an hour detour,” Heckman said. “We look at school bus routes, ambulance and fire truck response.”

People who live near bridges could be asked to fill out online surveys so MoDOT has an idea of how closing a bridge would impact their daily commutes.

"We have a lot of bridges that were built in the 50s and 60s that are wearing out right now, but we're just doing the best we can,” Heckman said.

What happens to the old bridges?

When MoDOT needs to completely replace an old bridge, the department tries to find a new use for it.

“If we can't use them for vehicular traffic, we make them available for public use,” Heckman said. “So sometimes farmers will take them and use them on their farm. Other times they're used as pedestrian bridges in parks, that type of thing."

The Lamine River Bridge, along with the Little Niangua River in Camden County, is listed on the National Register of Historic Places, so MoDOT is currently seeking proposals to repurpose the bridge. The department will give it to an interested group for free.

Built in 1924, the bridge is 93 years old, and Karen Daniels, a senior historic preservation specialist for MoDOT, is focused on trying to save it.

"The reuses of these bridges are basically unlimited,” Daniels said. "We are required to advertise to local governments and to historical societies. Because I do actually want to save these bridges, I advertise as widely as possible.”

The uses are unlimited, but past bridges have been reused for agriculture, pedestrians, bicycles, all-terrain vehicles and even equestrianism. Sometimes the bridges can even be repurposed for cars and trucks on roads that aren’t as busy, Daniels said.

MoDOT’s advertisement of the Lamine River Bridge ends May 2018. That means in a year, Daniels will know whether there’s a group interested in reusing the bridge.

If there isn’t any interest, the bridge will likely be demolished.