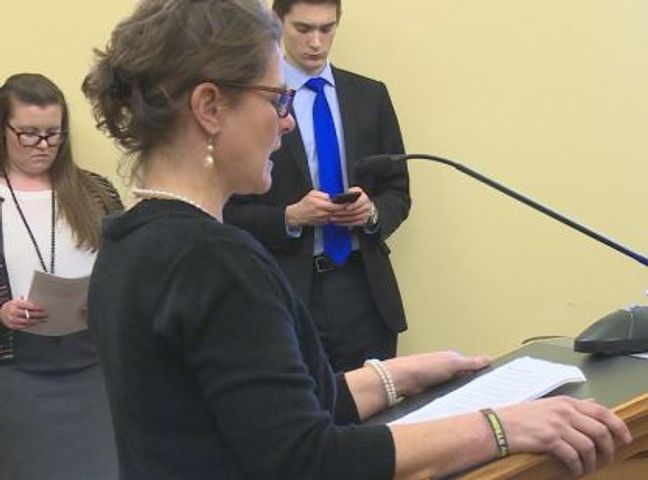 JEFFERSON CITY - After discovering that the hospital where her son died had a futility policy, Sheryl Crosier decided she wanted to help prevent other mothers from discovering these policies after life altering decisions had already been made. Crosier partnered with Rep. Bill Kid, R- Independence to sponsor House Bill 1915, or Simon's Law.

"Simon's law is a parental rights bill," Kidd said. "Parents deserve the right to make these big decisions for their children, not hospital staff members who don't know them."

The bill has five main points:

"Simon's law does not aim to tell hospitals whether or not they can have a futility policy," Crosier said. "It's just saying the hospitals would have to disclose them so that parents could then make educated decisions.

The bill was heard by the Standing House Committee on Health and Mental Health Policy in February. There are 27 pages of written testimony from the hearing.

Nine of the witnesses who testified were in support of the bill, while the other five were in opposition. All five opposing witnesses at the Simon's Law hearing were representatives from different hospitals in Missouri.

The witnesses who supported the bill at the hearing included Crosier, other mothers and pro-life organizations.

One statement read, "My parental rights were violated."

There were multiple stories of parents who lost their children to genetic disorders and believe unregulated futility policies kept the children from receiving optimal care.

The opposing arguments stated that the bill would inhibit medical staff from being able to communicate effectively with parents and families of patients with futile care.

One opposing testimony stated, "Making life-altering decisions is completely difficult and complex for families and to make these more complicated will only add to family distress."

The bill has still not been voted on.

Although Simon's Law has yet to be voted on Missouri, it passed through the Kansas senate committee and is making its way through the house.

Kidd said he hopes to get Simon's Law will be assigned to a new committee next session.

Although she said she currently does not see much hope for Simon's Law in this legislative session, Crosier is excited about the progress it made in Kansas and hopes it spreads to other states. She said she hopes to continue to open the conversation and push parents to ask more questions.