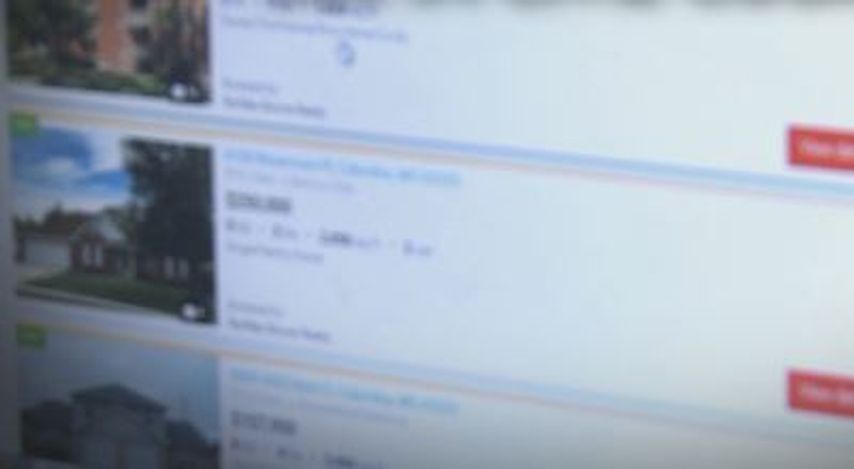 Derek and Melissa Sullivan, who are in the process of selling their Boone County home, reached out to the Target 8 Team after a series of house showings resulted in a missing engagement ring.

Adamant the ring was not misplaced, the couple told Target 8 they believe the ring was in fact stolen during a showing.

Since getting married, Melissa has kept a watchful eye over her engagement ring.

"I think any woman can tell you, their engagement ring, and their wedding ring, is a huge part of their life. You do certain things as a woman, and you know it's, you get married, and you have kids, and those mean a lot to you," she said.

Stored safely away in a drawer and buried under other items in her room, she said the thought of the ring being taken had never crossed her mind when putting her house on the market.

After a week of house showings in August, the couple was preparing for a trip when they discovered the ring was gone.

"My wife went to look for her engagement ring, she likes to wear on special occasions, and it was gone. And she called me at work and told me about it, and I, my immediate response was that it was stolen," Derek said.

Given the ring was under insurance, the Sullivans reached out to their insurance company, which then requested they file a police report. They did so with the Boone County Sheriff's Department.

"There was items, hand guns, they could have easily taken, but they did not because they are traceable with serial numbers. And yet they chose, to pick something that is not traceable," Derek said.

Rumblings in the realtor realm

Shortly after filing the police report, the Sullivans' realtor told them of rumors he had heard in the realtor community of similar property disappearances occurring during house showings in recent months in the area.

While neither the Sullivans nor law enforcement have been able to establish any connection between the realtors and guests that viewed their home, and the missing ring, Derek holds his stance that foul play occurred during the showings.

"This item was put away with care in a protected place, not a locked place, obviously, but there had to be some searching until they found what they were looking for," Derek said. "So the client or realtor. The realtor allowed this to happen and was involved in it, or just did not follow the client through the home."

For the Sullivans what remains the most difficult aspect of the situation to process is the feeling of betrayal, Derek said.

"The frustrating part of it, is knowing, you know, I granted them full access, because my intentions are good, so I believed their intentions would also be good," Derek said. "I think everybody takes a risk when they show their home, allow their home to be shown. But you shouldn't, the realtors there, the clients there, for something like this to happen, there has to be a perfect storm."

In order to understand what obligations realtors and their companies have when it comes to protecting the property of homeowners, Target 8 reached out to the Missouri Realtors Association.

Steve Graham, Vice President of Legal Affairs and Risk Management with the Missouri Realtors Association, said it comes down to circumstances.

"Often times it's difficult to determine who really the bad actor was," Graham said. "Sure if a real estate agent was actively and directly involved, you know, they should and will be held accountable for that. But oftentimes despite their best efforts, you can't prevent certain things. For example, if you are at an open house, and someone asks to use the restroom, sure, is it reasonable to allow them to use the restroom, I suppose, and so they may go in there, shut the door, but in the course of doing that pilfer through the medicine cabinets."

According to Graham, in the case that a realtor is suspected of being involved in a theft, there are three avenues of recourse that homeowners are able to pursue:

Given that there are two sides to every story however, Graham stressed that some time could pass during which a complaint is filed with the association and action is taken.

"Our ethics complaints will always be handled within 30 days, but we are obviously going to be sensitive to the situations and the needs of a particular situation," he said.

How to protect yourself

According to Graham, the Missouri Realtors Association has all of its realtors stress preventative action as the best way to avoid issues.

"We caution and warn owners to always remove or make sure you safely secure all of your valuables, including your firearms and generally anything that in particular, anything thats small that could be easily snatch, whether its coins jewelry, blank checks."

That said, Graham said nothing short of moving everything out of the house is an absolute guarantee of property safety.

"At the end of the day there can never really be a guarantee of complete safety. I mean banks get robbed, government agencies get hacked," Graham said. "...Realtors are not security guards, they are salesman."

Affiliated with, owned, or operated in connection with a realtor association, the lock boxes allow homeowners to keep track of who enters their home by tracking the individual electronic signatures of potential appraisers, inspectors, agents, and other brokers.

Target 8 reached out the Boone County Sheriff's Department for comment on the case. Detective Tom O'Sullivan informed us the the case is currently inactive and was unable to comment on the specifics of the case at the time.

Target 8 then reached out to the Columbia Police Department to see if it is handling any cases involving property thefts during house showings. According to Officer Latisha Stroer, officers are currently working one involving theft at the hands of a guest viewing the home.

"We want to remind people to make sure you lock up all your valuables. I mean I know people always think about jewelry, but things that are portable, like laptop computers, those need to be locked up. Ipods, ipads, those things are small, they can easily be taken during an open house or even a showing," Stroer said.

According to Stroer another preventative option available is to keep an inventory list.

"If your property is located, it makes it easier for us to get that property back to the owner," she said.

For now the investigation remains inactive, but Lindsey Sullivan doubts the ring will ever be returned to her.

"I can replace it, but the sentimenal value of it is never going to be the same that was on my finger the day I walked down the aisle or the day my dad gave me away," she said.