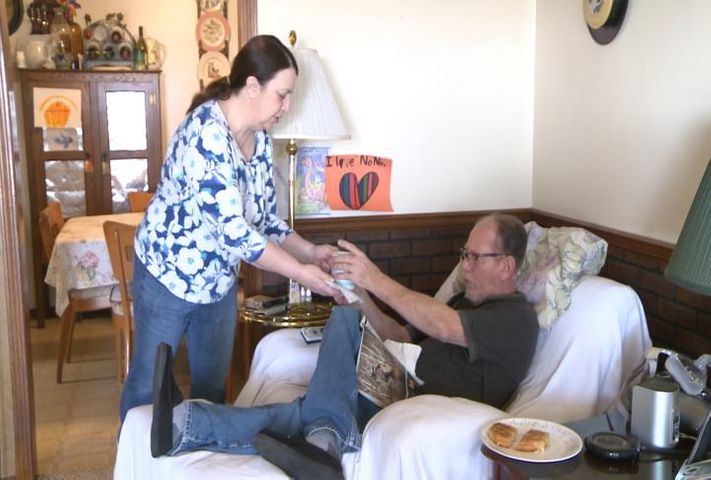 "Takes a little while to fill 'em up so you can get 'em right," she said.

She and her husband, Larry Nerini, live just outside of Macon, Missouri in a small town called Callao.

A few years ago, Larry Nerini left his job on disability. Barbara Nerini has been staying home to make sure he's okay.

"I have worked part time jobs but I've basically been taking care of him and his 79-year-old mother," she said. "I do some cooking for her."

Since then, the couple has dealt with a host of health problems between them. Barbara Nerini suffers from a thyroid issue and a stomach problem.

Without a steady job in the future for either of them, they decided to sign up for the federally mandated health care exchange in Missouri to get cheaper insurance.

The Nerinis bought a Coventry plan they thought worked for them but, despite Gresham's help, the Nerinis realized a few months later that there had been some sort of mistake with the prescriptions.

"My wife goes to the drug store the first time and we're supposed to have five dollar generic prescriptions," he said. "She gets the bill for three prescriptions and it's $165."

The Nerinis had purchased a plan in which the prescriptions they needed were only five dollars, but instead they found the medications cost $55 each.

Barbara Nerini said she thought it was just a mistake and suggested they call Coventry to see what was going on.

"I thought it was a bug in the system," she said. "I thought there was somebody who could resolve the situation."

The couple said there was no mention of the $55 price on the marketplace website.

"After that experience, I contacted Coventry and they kicked me to Express Scripts, which was their prescription drug carrier," he said. "Basically, I was getting nowhere, I was getting a different answer from each one person I would talk to."

Eventually Coventry told the Nerinis that they had been looking at the wrong prescription drug list and prices but, according to Gresham, that was the only list on the marketplace website.

After the Nerinis felt like they had hit a dead end with Coventry, they contacted the Department of Insurance.

The department sent him to the federal level, which sent him back to the state level.

After much back and forth, Larry Nerini found out about a law which prevented the department from offering any help to he or his wife, despite their filed complaint.

"Eventually I got a hold of a supervisor," he said. "After this went on for several weeks, she told me the legislature had passed a statute saying that employees in the state of Missouri could not help with the ACA."

The law, called Proposition E and passed by voters in November 2012, prohibits the creation of a state-based health exchange in Missouri. The act also prohibits state agencies from regulating or operating anything similar to a state-based health insurance exchange. If state employees interact with the ACA in any way, taxpayers can sue them, and money for a lawsuit would come out of that agency's budget.

Larry Nerini said, although most Missourians may not want the state exchange or allow state agencies to help, he thinks it's leaving people like him and his wife out in the cold.

"I'm sure there's people that go on the website that are overwhelmed and they don't realize what's happening," he said.

Barbara Nerini said she thinks it's time for a change.

"We're still living 20 years behind the time in Missouri," she said. "I do know there's another world out there and Missouri is way behind the times."

Bridget Kevin-Myers, a research assistant professor at the University of Missouri, submitted a report to two House committees and a Senate committee in 2013, delving into the "chilling effect" of the law.

"For me, hindering that process caused me some concern in that "is that really the best thing ultimately?'" she said. "Unfortunately, we have individuals who kind of get caught up in this and maybe aren't the most able consumers at this point."

She said she thinks both sides have their merits and the legislature was trying to "protect the citizens of Missouri who maybe don't want this federal plan for health coverage."

For now, the Nerinis said they are sticking with the Coventry One plan. Larry Nerini explained that it is the best plan for he and his wife and they are still saving money.

It's a great program, it's saved us hundreds of dollars, and we're really grateful for it," he said. "Even with the problems we've had, because otherwise we couldn't afford health insurance."

KOMU 8 News reached out to Aetna, the company that owns Coventry, to ask what it knew about there only being one prescription drug list on the federal marketplace site for two different plans.

A spokesperson for Aetna told KOMU 8 they told the Nerinis the correct drug list was on the marketplace at the time of their complaint in 2014. The Nerinis and Grisham maintain that there was only one list, and it was not the correct one for their plan.