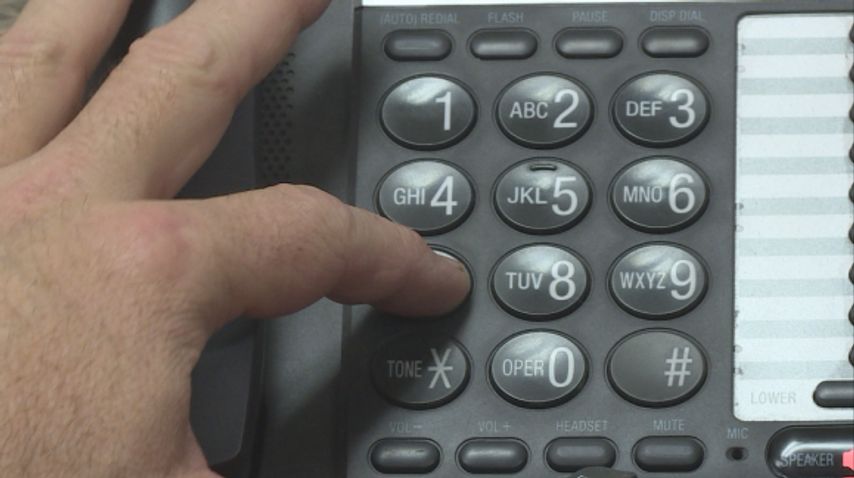 In the same time frame, phone users in the state submitted 49,776 complaints claiming that a telemarketer had violated the No-Call list law.

The No-Call list is a compilation of residential and cell phone numbers of Missourians who have indicated they don't want to be called by telemarketers.

As long as someone keeps the same phone number, their registration in the state No-Call list never expires.

Also, there is no cost for people to register on the list. After someone completes the registration, it could take up to three months before telemarketers add the number to their own no-call lists.

Jeff Asbury, who owns Murphy's Motor Service in Hallsville, is one of the people who filed complaints against telemarketers.

Asbury said his problem with telemarketing calls has been going on for a couple of years, but it wasn't until April when he started to keep a log of those unwanted calls.

"I've sent letters to the Attorney General's Office, they reply back, 'we'll look at it.' I've heard nothing from them," he said. "And these people, they just keep calling."

Depending on which law is violated, "a telemarketer faces a civil penalty up to either $1,000 or $5,000 for each knowing violation," according to the state attorney general's website.

Consumer law professor Amy Schmitz said both federal and state no-call lists could help people reduce the number of telemarketing calls they receive but not stop all of them.

Missouri law allows certain telemarketers to continue calling consumers on the No-Call list. According to the state attorney general’s website. Those exceptions include:

Schmitz said, another challenge to stop telemarketing calls is that some of those come from abroad.

"How do you establish jurisdiction and go after somebody in another country," she said. "That's incredibly difficult for prosecutors."

Based on those hearings, the National Law Review reported that from the more than three billion robocalls placed in March, nationwide, "about a quarter of these calls are scam calls."

Michelle Gleba, regional director of Columbia's Better Business Bureau, said it could be hard for people to identify scammers because many of them appear to be legitimate charities, businesses and organizations.

"Our best advice is to not answer a phone line if you don't recognize the number," she said.

Asbury said that may not be something business owners could actually do.

"When I call a business and I call the phone number listed and they don't answer, you kind of question why aren't they there at nine o'clock in the morning, they should be open for business," he said.

Schmitz said telemarketers are using technology to make it more difficult for users to differentiate robocalls from real phone calls.

"A lot of the information is spoofed, so when you look at your phone it would look as though it's coming from a local number, but in fact that's completely spoofed and it's not truly where the number's coming from," she said.

Schmitz said cellphones make it harder for people to screen out the calls they decide to answer.

"For example, many of your friends here in Columbia, Missouri, may have numbers from all over the country, so it's very difficult to decipher when a phone call is from someone that you don’t know," she said.

Schmitz said, in some cases, robocallers might even spoof someone's own number, making it look like if you were calling yourself.

Asbury said, "They look like local calls. If I don't answer, it may be a potential customer that I am not attending to, so it’s kind of a catch-22."

Gleba said she doesn't answer phone calls when she doesn't recognize the numbers, even when they have the same area code and prefix of her own number.

"Nine times out of 10 a message is not left, so that tells me it probably was a scam call," she said. "If it was a legitimate call then usually I'd get a message."

Asbury said he mainly receives calls from people trying to get him to update his Google listing.

"It's a nuisance, they call and especially when I'm trying to talk to a customer or I’m trying to work and they interrupt that and it's very frustrating," he said.

The robotic, telemarketing calls could even result in higher phone bills for consumers.

"If you are somebody who actually pays for incoming calls and that adds to the amount of calls on your list it affects your bill," Schmitz said. "Next, what if this is a scammer that's actually adding charges to your telephone bill (under the auspices that you supposedly had agreed to it), something called 'cramming.' This is another very significant impact on a consumer."

What can phone users do?

"I have pressed two, I have pressed seven to be removed, whatever they say, I've done that," he said. "Even if you go through the process and listen to them and physically speak to a live person and asked to be removed it still doesn't. I still keep getting these calls."

Experts say pressing any button during the phone call and just even answering the call could turn against you in the battle with telemarketing calls.

"How do you know that that's real", Schmitz said. "What if you press two and what that really means is that you just agreed to have some cell service that you don't want?"

Gleba said, "Simply by answering the phone call that alerts the scammer that you have an active line, so that opens you up to future phone calls. It also puts you on a list that scammers sell to other scammers alerting them that this is an active line."

Schmitz recommends consumers not to give away their phone number when they enter raffles or sweepstakes.

She also said there are certain subscription-based smartphone apps designed to identify and reduced the number of robocalls. Some of those are Truecaller, RoboKiller and Nomorobo.

The TRACED, or Telephone Robocall Abuse Criminal Enforcement and Deterrence, Act is a bipartisan bill introduced in Congress that would update the Telephone Consumer Protection Act.

"Nothing would happen in this year, but it's possible that that would provide for greater resources for enforcement specifically and fines up to $10,000 if those perpetrators are caught," Schmitz said.

The TRACED Act would also "require call authentication and blocking technologies, and establish an interagency working group to explore further ways to prosecute robocallers who intentionally violate the law," according to the National Law Review.

But Schmitz said the battle against robotic, calls from telemarketers may not be over, no matter what new methods service providers employ.

"The minute they establish something using one technology, the scammers would find a new one," she said.