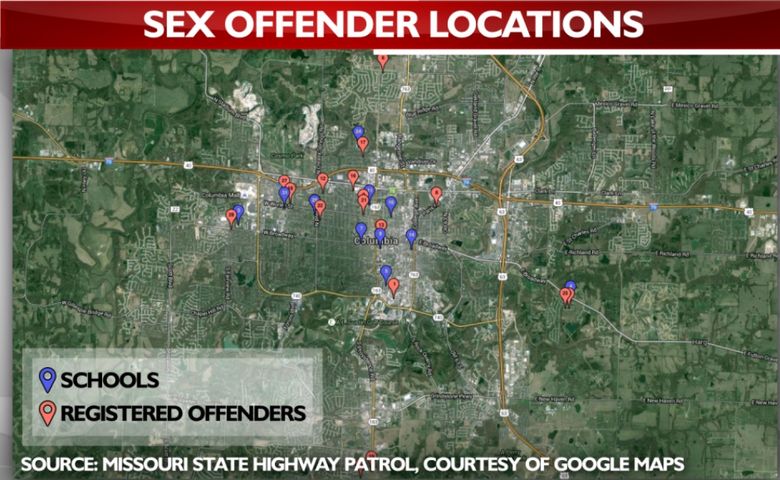 COLUMBIA - A law designed to keep children safe is being broken, according to a KOMU 8 News investigation.

The Target 8 team found at least 11 registered sex offenders living too close to 10 elementary, middle, and preschools in Columbia.

Jessica Luebbert said she is always thinking about the safety of her nine-year-old son Wayne. The two live right across the street from Wayne's school, Ridgeway Elementary.

"It's a safe community, but I admit I don't know all my neighbors," she said.

Luebbert was shocked to realize how close two of the offenders in violation live to her.

"There's always kids playing around the area, even though Ridgeway is a lottery school, there are kids constantly out and about outside," she said.

Specifically, Chapter 566 in Missouri's statutes lays out all the restrictions against registered sex offenders.

The 11 offenders KOMU 8 News identified appear in violation of statute 147 in Chapter 566, 566.147.2, which requires "certain offenders not to reside within one thousand feet of a school or child care facility." The law applies to sexual offenders convicted on charges that include offenses like sodomy, child molestation, rape, and sexual assault. However, this statute has a number of exceptions listed.

It is the local sheriff's department's responsibility to maintain the list of offenders' information that's submitted and to compile a list to send to the Missouri State Highway Patrol. It is not the local sheriff's department's job to move each offender if they are in violation; however, the department is expected to investigate whether the registered sex offenders are breaking the law and update that information.

Check out your neighborhood with our interactive map:

KOMU 8 News reached out to Det. Tom O'Sullivan for comment.

In the first interview, O'Sullivan said he was confident that his team was on top of the issue;

"At this point, we're able to effectively monitor that list, most of the offenders are compliant, they do what they're supposed to do, and they register on time," he said.

When asked if people were checking out the website, he said, "Oh absolutely, we have two detectives that monitor these guys."

When presented with the list of offenders and the map above, he said, "I'd have a hard time believing all these people would be around these schools and we wouldn't know about it," he said.

O'Sullivan asked for the names and addresses and requested time to check out each offender individually and then meet again. KOMU 8 News sent the information, including pictures that indicate the offenders were living closer than 1,000 feet from school property.

A couple weeks later KOMU 8 News met with O'Sullivan again, and he was unable to confirm any of the information.

"I'm not going to comment on those other names, at any given time we have registered sex offenders that are being non-compliant and we go after them," he said. "You could come back in six months, and I'd tell you the same thing, it's impossible to monitor these offenders 24 hours a day."

O'Sullivan suggested the Target 8 team talk to the Missouri State Highway Patrol because, he said, it is the agency that compiles and monitors the registry.

When KOMU 8 News asked MSHP's Cpt. John J. Hotz about who is responsible for checking into whether offenders are compliant, and where they can or can't live, he said: "The local sheriff's departments are the ones you would want to contact about that."

There are eight people assigned to work on updating the registry. Hotz declined to comment on whether the team updates information if it checks into if offenders are in violation, as indicated on the website.

"We are responsible for maintaining and updating the registry with the information that's provided to us from local sheriff's departments," he said.

O'Sullivan mentioned a Missouri Supreme Court decision, pending litigation, and what's referred as the "grandfather clause" as other possible reasons there may be non-compliant offenders near schools.

So following both interviews, the TARGET 8 team fact checked each response from the Boone County Sheriff's Department.

1: O'Sullivan: "It could be that some of those individuals were grandfathered in"

The grandfather clause means that the offender would have had already established a residence before the school opened and notified law enforcement within one week of it opening.

2: O'Sullivan said, "Well it’s my understanding that the Supreme Court decision is under appeal from registered sex offenders that don’t think it was fair or don’t think it was fair or legal or lawful, but they were going to wait until the appeal process was concluded before deciding to do with some of these people that have lived at this residence before the Supreme Court decision."

3: O'Sullivan said, "Some of those people living there have lived there for a long time and there is pending litigation appealing that Supreme Court decision.”

Fact check: KOMU 8 News spoke with an attorney who pointed out even if cases are under appeal or having pending litigation the website should still be updated with that information.

Most of the offenders in violation had charges of sodomy or child molestation of children ages 14 to 4 years old, yet on the highway patrol's website they're marked compliant.

Luebbert got emotional talking about the issue.

"Can't trust my community to keep my kid safe, that's not cool," she said tearfully. "I know I'm not the only one who would feel this way."

The Boone County Sheriffs Department said it couldn't identify the last time its team did a "door-to-door check", doing in-person evaluations on the current status of sex offenders. O'Sullivan said he hopes to conduct one in the next couple months.

The Office of the Boone County Prosecuting Attorney and Columbia Public Schools declined to comment on this story. However, CPS did release this statement:

"The school district relies on law enforcement for enforcement of the registry requirements and has policies in place that prohibit access to schools by registered offenders."